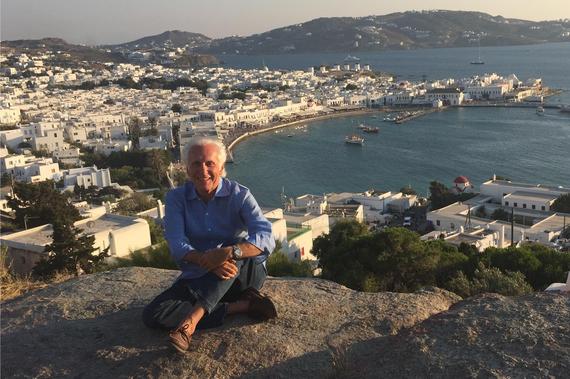 A sun soaked island hillside dotted with small, whitewashed buildings that seemingly rolls straight into the deep blue, Aegean sea. It all seems so perfect, so idyllic. Like the set of a movie viewers want to jump right into and join the movie characters as they dance and sing along the seaside.

Who would guess that this actually is the perfect setting... for a murder?

At least, that's what Jeffrey Siger thought ten years ago when he wrote the first in his Chief Inspector Andreas Kaldis murder mysteries, Murder on Mykonos. "At the time, I'd been visiting Mykonos for over 20 years and always wanted to write a book that explained its people, its culture and the social scene, but one that told it like it is, without taking a cheap shot at anything. I figured the best way to do so was to take a Mama Mia style setting and drop a serial killer into the middle of it!"

It was a fruitful thought. MoM became the #1 bestselling English language book in Greece and even hit the radar of the New York Times bestseller list. Jeff now also serves as Chair of the National Board of Boucheron, the world's largest mystery convention and travels worldwide promoting his craft.

The seventh book in the hit series, Devil at Delphi, (released Oct 6, 2015) sees his hit character embroiled in solving yet another crime with a societal tie. "I explore issues in contemporary Greece in a way that it touches on its ancient roots," Jeff explains. As anyone who's watched a news report these past few months knows, there are a lot of issues in contemporary Greece for Jeff to explore through his characters. "Devil of Delphi is quite a powerful book," he admits with not a little bit of awe. "In it and through the underlying theme of opportunism dealing with counterfeit food and wine, I'm trying to anticipate where Greece--this country that I love so much--is headed."

Born and raised in Pittsburgh, Pennsylvania, Jeff abandoned his artistic talents under the urgings of his father who insisted he choose a profession, "that paid," instead. That led Jeff to a very successful career as a Wall Street lawyer and the establishment of his own law firm. "I only started writing again after I was encouraged," he says. "Somebody said that if I'm really serious I had to throw myself into it. So, I decided to walk away from my practice and I wrote two books--so called 'drawer novels'--before the first one that was published."

However, his background has definitely kept him in good stead. As a trial lawyer he represented people who were being blackmailed and his daily dealings with the press and various experts gave him lots of experience on how people react in crisis situations. "I try to draw on my past experiences and make it real," he says. "My research has me talking to people all the time. At 4 or 5 a.m. I can be sitting at a bar in Mykonos talking to a politician, or business leader. Part of my experience as a lawyer is getting people to talk."

It can be touchy for an "outsider" to deal with certain situations that Jeff writes about. Wasn't he worried about his adoptive island neighbors reactions to his novels? "I was concerned," Jeff admits. "But people were shocked at how well I managed to plug in to the Greek mentality and that I managed to do so in a way that made it understandable to non Greeks." This is probably thanks to the fact that Jeff himself viewed the island society from an outsiders perspective before joining it. "As far as my life goes I really integrated into Greek society because I loved it. I'm not Greek but my heart is Greek," he says.

I ask Jeff what the best part about his job is. "Every morning when I wake up I can't believe that all I have to do is sit down, write and create something." With a laugh he shares that when he gave up his law practice he realized that in one year as a lawyer he could earn more money than in his entire career as a writer. Does he regret giving up that salary? "Writing is a lousy way to make a living but a wonderful way to make a life," he says with not one ounce of regret. "Any writer knows that in writing, one day it's like walking across a plateau, easy and beautiful. The next day, the writing process is akin to using your bloody knuckles to 'climb a mountain.' But it's all worth it."

It sure helps if that mountain has a hillside that drops into the deep blue, Aegean Sea...