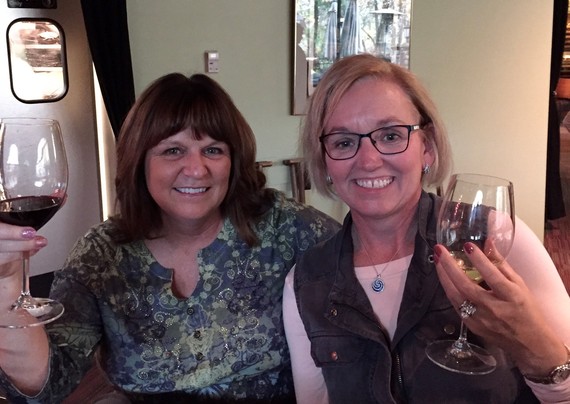 Mary was a city council president, owns a small business, and prefers Cabernet. Amy worked for a corporation, owned a successful franchise business, and drinks Chardonnay. Mary is voting for Trump, and Amy is voting for Clinton. We are friends and will remain friends after the election on November 8.

When the dirty dust settles after this ugly political season, the biggest losers are those who destroyed friendships and fractured family relations over which candidate was the least horrible. The winners will be those who respected a process that is flawed but enduring, and those who can call their friends with opposite opinions and come together to celebrate that the national angst is over.

Mary, Amy, and I met recently for drinks and appetizers. We lamented the latest political crisis and then launched into a positive conversation about our children, our upcoming trips, and how the weather was impacting our seasonal allergies. Mary is anticipating a new grandchild in December, I just spent a week with my funny grandchildren, and Amy isn't ready for grandkids but is perfecting her golf game. The most competitive fact about Mary and Amy is that their homes are immaculate and they take cleaning to a level beyond the sterile requirements for a nuclear laboratory. They know I have trouble stepping over piles of debris in my office and that my kitchen counters have growing mounds of clutter that include last year's power bills. We love each other anyway.

We agreed that politics has turned social media into a cesspool of condemnation, criticism, and hostility. I recently posted a news article to Facebook that questioned the integrity of a candidate which prompted an assault of vile responses from both sides. Women were calling other women idiots, puppets, and uneducated morons. They were tagging names of women they didn't know and chastising them for their ignorance. After the discussion dissolved into abortion and eternal damnation, I deleted the post and took a shower.

I knew that most of the women writing the scathing remarks would never talk that way if they had been together in person. I was confused about the total hostility directed at people they had never met and would never meet, and it was all for a candidate that only wanted their vote and nothing else. I have stated many times that neither candidate is worthy of my vote, so I can say anything I want. My position is liberating.

I'll continue to participate in local and state elections so we can promote better candidates to lead our country. In my opinion, the lack of competent, ethical leadership has forced the country into class warfare, and we're being duped to follow the Piped Piper with the sweetest music and the shiniest baubles. It will take strong effort by a committed population to crawl out of the current pig slop, but we can do it.

That's where women such as Mary and Amy can play an important role. Find the common ground, work to promote the best community possible, and come together in person to share laughter and wine - even though some may prefer Cabernet and others want Chardonnay. Stop criticizing each other and find the truth that makes us humans on the same planet. We're not getting out alive, so we might as well stop the bitching and start the bonding.

I want my grandchildren to appreciate and tolerate a variety of voices, and I want them to research the facts beyond the hype so they can intelligently form their own opinions. They can improve the future political process by communicating honestly about candidates and positions, and by studying the negative implications of electing the wrong person. It will be their turn to make it better. And, I want to show them that Mary, Amy, and I remain good friends.