With the Fed likely to raise interest rates at the upcoming December meeting, economists are watching the November jobs report closely. What's next for the labor market? Here's what we're watching for in Friday's report:

• Non-farm payrolls up 190,000 jobs.
• Unemployment rate steady at 5.0 percent.
• Labor force participation rate down slightly to 62.3 percent.
• Average hourly wages up 2.4 percent from one year ago.

Strong Growth, Mixed Signals
Despite signs of a slowdown, the U.S. labor market has made remarkable gains in recent months. The unemployment rate today is down to 5.0 percent, average wages are growing at the fastest pace since 2009--up 2.5 percent from a year ago--and the economy churned out a whopping 271,000 new jobs in October.

On the surface, the economy is the strongest it has been in a generation. But beneath the headlines there's another story that's too often overlooked. Despite tremendous progress in recent decades, there remain deep divisions in the U.S. economy today in wages, unemployment and the educational attainment that drives job market outcomes.

A Divided Unemployment Picture
Although today's unemployment rate hovers at 5.0 percent, that figure varies dramatically for workers in different age, education and racial and ethnic groups.

Minding the Gaps
Today's economic disparities extend well beyond unemployment, affecting wages as well. The most widely debated earnings gap is probably the gender pay gap. In the table below, we show average wages for men and women, along with several other demographic groups. On average, women working full-time jobs earn $18.03 per hour compared to $22.23 for men. These data are the basis for the often-repeated statistic that women earn about 81 cents for every dollar earned by men.

While the gender pay gap is a real, systemic problem, less often discussed are ethnic pay gaps, some of which are dramatically more pronounced than the gender pay gap. For example, average hourly pay is $24.35 per hour for Asian workers and $20.73 for white workers. By contrast, Hispanic or Latino workers earn on average just $15.05 per hour, while black or African-American workers today earn $15.60 per hour. 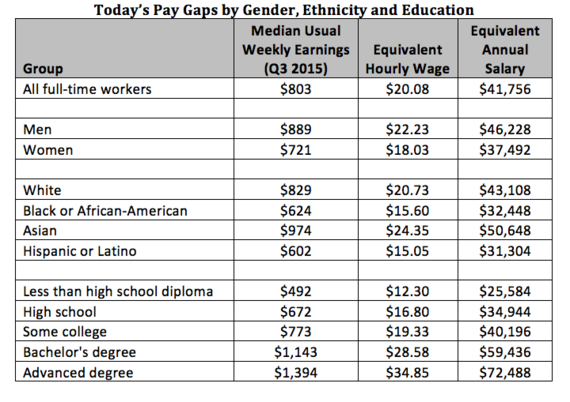 Education Matters
What's behind these labor market gaps? One of the biggest drivers is education.

There's a well-known gap when it comes to the amount of access workers with various levels of education have to on-the-job skills training--those with less education have less access to the skills they need to advance their careers. Just as investments in tools and machines boost worker productivity, investments in education build what economists call "human capital." More and better education sharpens workers' skills, helps meet the demands of today's technical workplaces, and ultimately raises wages.

How much does education boost pay? A huge literature of studies finds an extra year of schooling permanently raises wages by about 10 percent. That's an investment that far exceeds the 7 percent long-term return you can expect to earn from the stock market. And the impact on wages is clear in the table above. Workers with an advanced degree earn $34.85 per hour on average, about 2.8 times more than those without a high school diploma, and twice the pay of those with a high school diploma alone.

Seeking Solutions
Most of today's ethnic pay gap is due to difference in education. While 48 percent of Asian workers have a bachelor's degree or higher, just 13 percent of Hispanic or Latino workers, and 19 percent of black or African-American workers do. These gaps are easy to see in the data but difficult to resolve in practice--despite a mountain of research and policy experiments.

In today's bustling economy, there are constant reminders of the health and strength of the labor market. While true, there remain large numbers of Americans with whom the latest economic expansion has not been shared. As we examine the topline figures from the monthly jobs report, it's important to remind ourselves that today's prosperity has not been evenly shared among socioeconomic groups--something that closing today's disparities in access to education can help resolve.