A few months ago I was surprised to learn that there are no World War I memorials that meet the strict interpretation of what a "national" monument is or should be.

I am now equally surprised to learn that "while the other great conflicts, including the Civil War, World War II [below], the Korean War, and the Vietnam War have all been memorialized on United States commemorative coins, there currently exists no coin to honor the brave veterans of World War I." 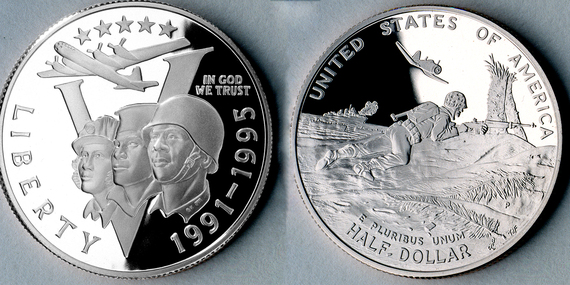 In May 2015, as part of promoting a "suitable observance" of the centennial of World War I -- a war in which more than four million Americans served and a war in which the United States suffered 375,000 casualties, including 116,516 deaths -- the World War One Centennial Commission, established by the U.S. Congress, opened an international design competition for a National World War I Memorial, to be built in our nation's capital.

As reported here, after receiving more than 360 design concepts from designers around the world and after narrowing them down to five finalists, last month the Centennial Commission selected "The Weight of Sacrifice" by the design team of Joe Weishaar & Sabin Howard as the design concept for the National WWI Memorial to be built at Pershing Park. (Perspective below) 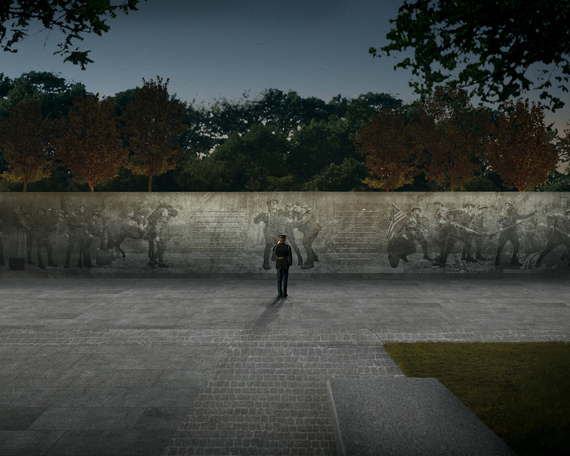 "The Weight of Sacrifice"(Courtesy The World War One Centennial Commission)

Now, as part of the same commemoration of the centennial of our country's involvement in World War I, the Secretary of the Treasury has been authorized by Congress to issue a coin in 2018 to commemorate the centennial and to "honor the over 4 million men and women from the United States who served during World War I."

A coin that, in the words of Rhett Jeppson, the United States Mint's Principal Deputy Director, "will serve as a tribute to the bravery, actions and sacrifices of Americans...a coin that will also serve as a tangible means to help future generations understand and appreciate the impact of what was called 'the war to end all wars.'"

To that end, the U. S. Mint is announcing the "World War I American Veterans Centennial Commemorative Coin Design Competition" and calling on American artists to submit designs for a commemorative coin -- a silver dollar -- that, according to Jeppson "will preserve an important time in American history and convey a sense of pride...an opportunity to capture the sentiment and patriotism of the time."

The commemorative coin will be known as the 2018 World War I American Veterans Centennial Silver Dollar and will bear the initials of the winning artist along with the initials of the United States Mint sculptor-engraver who will sculpt the selected design.

Also, the winning artist will be named as designer in historical documents, the Certificates of Authenticity and promotional materials.

In addition to these honors, the winner will receive a cool $10,000.

As an avid coin collector, I look forward to owning one of these coins.

Part of the price of the coin includes a surcharge* that will go to the United States Foundation for the Commemoration of the World Wars and will assist the World War I Centennial Commission in building the National World War I Memorial mentioned above.

My only wish is that I was sufficiently artistically talented to come up with a design suitable for this prestigious competition. It is a once-in-a-lifetime opportunity. In modern history, the U.S. Mint has called upon the American public only a handful of times to submit designs for a coin.

I am certain that among our readers -- or acquaintances of our readers -- there is someone who has the talent to participate in this unique competition.

•The competition is open to U.S. citizens and permanent residents who are at least 18 years or older.

•During Phase One of the competition, which is open from February 29-April 28, 2016, artists are encouraged to submit their contact information and three to five work samples using an online form.

•Up to 20 applicants from Phase One will be selected to participate in Phase Two, where they will create and submit designs and plasters for the final coin.

•An expert jury composed of members of the U.S. Commission of Fine Arts and the Citizens Coinage Advisory Committee will review and score design submissions.

Please help spread the word and encourage any artists you know to take part in this unique, exciting and very worthwhile competition.

* Since the modern commemorative coin program began in 1982, the United States Mint has raised more than $506,000,000 in surcharges to help build new museums, maintain national monuments like the Vietnam War Memorial, preserve historical sites like George Washington's home, support various Olympic programs, support programs such as the Boy and Girl Scouts and many more. (The U.S. Mint)