The "Jackson Pollock and Shamanism" exhibit at the Pinacotheque -- a rather unconventional private museum in Paris -- is startling. One walks downstairs into a red chamber -- a womb of sorts -- where one is met with a black-and-white video of Native Americans in ceremonial dance, next to early works by Jackson Pollock (in dark yellows and black), alongside text that explains that shamanism -- the key to Pollock's work, argues curator Stephen Polcari -- is a world phenomenon, where the shaman leads participants into an underworld, he himself turning into his otherworldly double, an animal. Shaman, we learn, is a Siberian word that means "he who jumps for joy and agitates."

The shamanistic experience continues. In the next room -- blue -- we see Jackson Pollock's own experiments into the underworld, replete with images influenced from his years of Jungian psychoanalysis: bulls and horses, labyrinths, skulls and snakes. The exhibit is organized according to themes: Birth, Men and Women, Man and Animal, The Dance, The Sacrifice, with Native American artifacts (Tlingit soul catchers, Eskimo masks, Haida totem poles) placed alongside Pollock's dense journeys in paint. I listen as a guide explains to a group of elderly women that Pollock, in one painting, has recreated birth, with spirals representing a womb, and animal figures signifying initiation into a spiritual world. A world that evidently incorporates the dark side, as the spirals lead to skeletal images and other gloomy symbols that verge on the occult. "How beautiful!" cooed several of the elderly women. 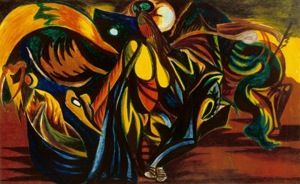 Pollock -- a very troubled alcoholic depressive, according to many -- was drawn early on to Native American spirituality, the catalogue tells us, influenced by his childhood forays to Navajo reservations in Arizona, an interest revived when the artist saw a MoMA exhibit on Native Americans in 1941. He turned to Jung and Shamanism, as did many other experimental painters in the 1930s and 40s, as a way to heal splits in himself -- splits that corresponded, the curator argues, to a disturbed period of American history.

The exhibit evidently wants the spectator to experience the same healing effect. To get to the third room of the exhibit, one must pass through a tunnel, where a black-and-white video flashes on the wall: a shaman dressed in enormous white phoenix feathers flaps his wings in an eerie dance, the sound of drums and flutes carrying throughout the other rooms of the exhibit. In a nook of the tunnel, a light-show of rainbow colors flickers on the narrow walls.

Then one arrives at the other side: to Jackson Pollock's drippings, the dark colors shifting to blues and pinks. The dripping technique is compared -- with an illustrative video -- to the Native American technique of sand-painting.

How odd, I thought, that a museum in France -- a country historically anti-religious and more than reluctant to accept new-age spirituality or notions of the occult (Carl Jung is barely discussed here, compared to his estranged brother in psychoanalysis, Sigmund Freud), where exhibits are more often than not organized in terms of technique (Picasso and the Masters) and aesthetic influence (Matisse and North Africa) -- is not only devoting space to Pollock as a mystic, but is encouraging the viewer to take the same mystical path. The exhibit ends with a suggestive account of Pollock's automobile accident (was it destined?), followed by one final painting: "Ecstasy," a small painting of phallic ovals and feminine squiggles that incorporates in triumph -- the text explains -- the man's lifelong obsessions.

The message: the shamanistic quest worked.

Curious to understand how such an exhibit -- advertised on the broadside of all the city buses -- slipped into the mainstream of Paris, I contacted the director of the museum, Marc Restellini.

All I knew about Restellini was that he had been alternately commended and despised for running a per-profit museum in Paris. 13 euros a ticket, some protested!

Restellini greeted me in his offices near the Pinacotheque, right by the Madeleine, a warm open space of wall-to-wall carpets and great sunny windows, with a modern white leather couch and pretty girls running the reception (another innovative idea: the girls working there do so part-time, on internships from a local tourism school, a student employment possibility almost unheard of in Paris).

A reserved low-key man with a twinkle in his eye and quirky energy in his pace and handshake, Restellini led me to his sparkling clean office, and explained to me that he had previously been curator of the Luxembourg Museum in Paris for three years, where he had felt the political pressure of working for the government (the Luxembourg Museum is owned by the Senate). Exhibits in public French museums, he noted, were generally run by bureaucrats, which explained -- he confessed -- why he did not much appreciate them. The curator was more likely to act as a "fonctionnaire" than as an art historian.

Restellini's own background was as an art historian, in a field uncannily relevant to what he is doing now: his thesis was on Modigliani's art dealer, who was Restellini's own artist grandfather's dealer as well. Evidently, this early interest in the interface between art and the public (and the middlemen involved) propelled him far. While still a student, he took the initiative to organize a Modigliani exhibit in the St. Sulpice square, appealing to collectors he knew for the collection, a feat that inspired the Japanese to ask him to organize a major Modigliani retrospective in Tokyo in 1992 -- which all led him on the path to being a curator.

I asked Restellini if I was right in seeing an exhibit on Pollock organized around his mystical leanings (rather than his dripping techniques) as politically incorrect in anti-mystical Cartesian France.

"Absolutely," he smiled, folding his hands on the desk. "Why do you think I did it? "

He continued with a bemused look in his eye. "Since I have been curator, I like to do things that go against the grain of French mentality. For example, during the heat of the Iraq war, when tensions were high between France and the US, I deliberately did an exposition on the American artist Roy Lichtenstein."

As for the Pollock exhibit, the idea came to him when a friend introduced him in New York to art professor Stephen Polcari, an American who writes and lectures on Pollock and Shamanism. At first Restellini was not convinced by Polcari's original thesis, but later -- drawn to see archetypes rather than abstractions in the paintings -- the connection became clear to him, and he asked Polcari to curate.

As our conversation continued, it became clear as well that Restellini was not only the businessman behind the exhibit, but that he personally related to Pollock's art -- and had gone so far as to guide the exhibit. It was he who had the idea to include Native American artifacts; it was he who invented the idea of the light-show tunnel.

It was he who chose to end the exhibit with the painting "Ecstasy."

"So you respect Pollock's belief in the mystical journey?" I opined.

"Of course I respect it," Restellini said. "Artists have thin skins and are very sensitive; they react far more strongly to life. In extreme horror, one has no choice but to believe. Either you believe in God or you commit suicide. To combat his own ills, Pollock looked elsewhere."

He added with a mysterious smile. "One must believe there is always a better world ahead."

Returning to the exhibit for a second visit, I noticed what I had not on my first round. After the small sketch "Ecstasy" and right before the stairs leading up to the exit, a huge blue bird is projected on the wall -- bright blue on a white background -- posed in flight as if it had just been freed. 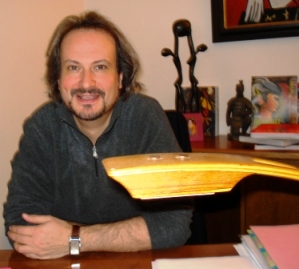