"It makes no sense to compare," Marc Restellini, director of the Pinacotheque Museum in Paris told me when I asked him why Maurice Utrillo was the famous painter of Montmarte, while his mother Suzanne Valadon has generally been forgotten. Restellini's exhibit, ongoing now at the Pinacotheque, places the mother-son paintings side-by-side, and it becomes a natural question -- I think -- why one painter was once considered "better" than the other.

It is also interesting to see how two people from the same family see the world differently.

The exhibit portrays the two equally, suggesting a life-long (and mutual) mother-son influence. Utrillo's empty landscapes of buildings and streets -- haunted by a sense of loneliness -- hang next to the bold paintings of his mother, with their extra-bright trees outlined in dark strokes.

Yet the two artists, despite sharing an odd sensibility, seem to have only one aesthetic in common: at times, a similar choice in pastels ("Obviously," Restellini told me. "They shared the same palette.")

Aside from this vague similarity, the two are dramatically different.

The mother is known for her nudes which really are "nakeds": no airbrushed prettiness, but slumps and curves and wrinkles. She dared to paint what she saw: a scandalous choice for a woman, it seems. Restellini told me that women artists -- even in the early twentieth century -- rarely left the subject matters considered respectable for women: sewing, children, family scenes. Indeed, Valadon's "Adam and Eve" was censured not because the nudes lacked a fig-leaf, but because the artist was a woman. 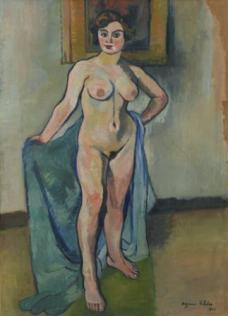 Another scandalous painting: a portrait of a woman playing a viola.

Even today, the sexism persists: "She paints like a man," catalogues announce.

As for Utrillo: he was an drunk since age 9, in despair because his sexy adventurous mother often left him alone as she pursued her art and her loves, including some of the most well-known painters at the time and a wealthy businessman who later married her. Utrillo was to be shunted to insane asylums all his life, the mother spurred to get him institutionalized by her businessman husband who could not take it anymore. 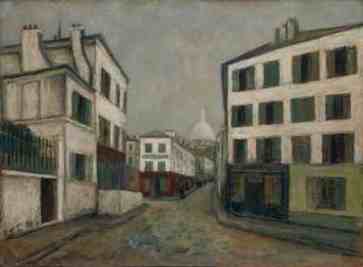 His paintings are landscapes of edgy stillness: buildings and streets.

"The walls of Utrillo have a painful secret," Jean Fabris, curator and long time-friend of Utrillo's widow, told me that a critic once told him. "They have the odor of piss."

For me, Utrillo's buildings are reassuring structures, like hard-edged teddy bears that a child might erect around himself when the parents have left. The grey-white streets -- such as the famed "Rue Norvins" (1909) -- have a rainy melancholy even when there is no rain. In his "Eglise de Banlieu," a lonely whitish light emanates from the steeple, from the safely curved road. My favorite: the blue-roofed chapel of Roscoff (1911), crooked on a dull-green isle, with turbulent waves.

In marked contrast to the mother's paintings, the human face is missing, and the colors muted. In "Rue Muller at Montmare," the steps go up, with people's backs turned, the black and red windows impenetrably closed, with a block of deep green to the left. It is -- like all of Utrillo's work -- a very calming painting. In "Derriere la Maisson," we see leaves falling in a murky pink-grey sky, snow on a long lamp-post and dark figures with their backs turned.

"The backs are always turned," Restellini told me.

The buildings are more alive than the people, some slanting inward or breathing, while the windows are dark and closed. We can't see in, just as we can't see into Utrillo. His paintings are constrained, reserved, strong and dignified.

Which brings up an interesting paradox: in real life, Utrillo had no dignity. He sold his paintings for a bottle of bad wine, and had alcoholic tantrums of paranoia which made him "horrible" with people, the curator told me. Photographs of him show the kind of person one sees early in the morning at a local smoky bar in Paris: wrinkled and red-cheeked, bowed down. The kind of person one winces at.

Yet all this pain and self-destruction becomes noble and dignified in his art--and is today celebrated by a vast public.

As for Suzanne Valadon, his mother: she, daughter of a laundress, once reviled for her loose morals, is now celebrated as well. Her bold lines have become unforgettable. For example, take her vivid "Vue de Corte" (1913), a stunning city carved in a hill, outlined like a pile of pebbles, each rounded and imposing, with black borders. It is, like all her work, bright and bold, but not cheerful.

Her trees are also unforgettable: twisted with rich green color and dense black outlines. As is her painting, "Still Life with Hare, Pheasant and Apples", where a tied up hare hangs next to a dead pheasant plopped on a white drape -- a simulacrum of a dying old man on a bed -- along with five rounded reddish apples.

The mother's most disturbing work: her self-portrait in her middle age, which even the publicist for the exhibit confessed she could not bare to look at. Valadan is crooked before a mirror, her breasts sagging, her eyes pained with disappointment. 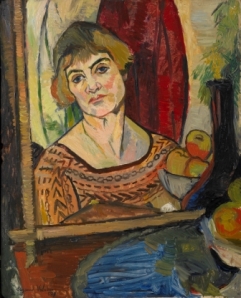 "Her lover had left her," Fabris the curator confided.

Or perhaps it was some other lifelong frustration. The two -- Valadon the loose woman ("who dared to be free", Restellini opined) and Utrillo her drunken son -- were on the fringes of Paris society during their time, a marginality, the exhibit suggests, due to their lower-class position as well as their artistic difference from the elite painters of the period: the "Ecole de Paris."

And now -- for the first time -- both Valadon and Utrillo are at the center: literally a stone's throw from the Seine in the classy Madeleine plaza, at the most chic museum on the right bank.