Essentially it's a machine capable of perceiving its environment and, accordingly, taking complex actions. And, of course, it can fly.

The flying robot in question, named Fleye, resembles a soccer ball and is about the same size and weight. Fleye combats gravity with a patented new take on the ducted fan principle seen in industrial drones: Its single propeller is encased in shell made of expanded propylene, the protective foam used in bike helmets, allowing you to safely touch or redirect the system while it's in flight--a development that may end the era in which you can tell drone enthusiasts by the Band-aids on their fingers.

At its most basic level, Fleye is a hovering selfie stick with a camera that takes high-definition photos and video. Because it flies ten miles per hour, and can do so autonomously--i.e. an onboard computer serves as pilot--Fleye can follow you around, its camera keeping you in frame all the while. The advantages of this should be clear if you can imagine filming yourself while skateboarding--or if you've already tried that and survived.

Because the onboard computer features an open API (application program interface) and SDK (software development kit), you can program Fleye to do any number of additional tasks, including following other people, conducting search and rescue operations, participating in games of your creation, and training Jedi--think the spherical droid that dodges Luke Skywalker and his lightsaber.

You can also control Fleye the relatively old-fashioned way, with your smartphone.

Fleye was created in Liege, Belgium, in 2014 by thirty-eight-year-old electrical engineer Laurent Eschenauer, who describes himself as "the kind of guy who writes software on Sunday afternoon because it is fun," and aerospace engineer Dimitri Arendt, 34, who "started building planes when he was eight, never stopped flying stuff since then."

In one year, the duo went from cobbling together balsa wood models in Eschenauer's attic to a working prototype that wowed attendees at the Tesla World conference. Said drone enthusiast Pierre L'Hoest, "It is like a drawing from da Vinci or Spielberg becoming real in front of you." L'Hoest happened to also be president of The Faktory, the Belgian private startup accelerator that would supply much of Fleye's 600,000€ ($637,000) seed round.

With their Kickstarter campaign, Eschenauer and Arendt are seeking an additional €175,000 ($186,000) to produce 250 to 500 of their robots. While they might have simply cashed more venture capital checks, they opted for Kickstarter, viewing the funding platform as a singular opportunity.

"It is a great way to test the market early on, validating that there is demand for a product before going into production," Eschenauer says. "These first sales are important and help reassure everyone, from the team to our current and future investors. In addition, it helps create a community around the product that is passionate about seeing it come to life and which will help in sharing their ideas and feedback."

The feedback will result from putting Fleyes in the backers' hands--or, as the case may be, in the air nearby. A Kickstarter pledge of €599 ($635) nets backers the base-model robot. The campaign runs until January 15, 2016. 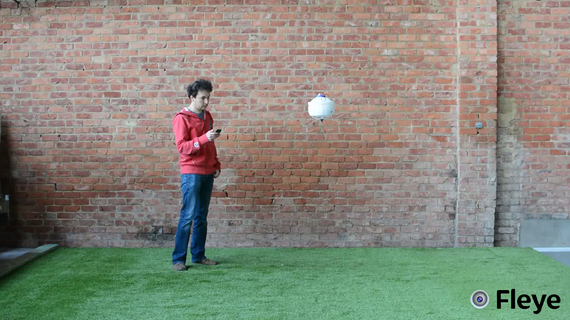