Have patience. All things are difficult before they become easy.
Saadi

For the past few months, we continued to Google the Term, Dow 19K, Dow 20K and Dow 21K. We got the most hits on the search term Dow 20,000, but the noise was not enough for us to take these developments too seriously. However, when we noticed that CNBC published two similar titled articles within a time span of 30 days, it was time to take note.

It is a known fact that when sites such as CNBC take a stance, your best bet is to take an opposing position or move to the sidelines. Too many sites are calling for Dow 20,000, and the Dow has not even traded past 19,000 which means that the markets are more likely to head lower than higher.

All top sites like Barons, moneypress.com, Cnn.com, etc. have an uncanny knack of being in the wrong camp and precisely the right time. The chatter calling for Dow 20, 0000 has hit a level that is too much for us to ignore.

In a very recent article, titled crude oil bottom likely to propel Dow higher we made the following comment

The consolidation in oil appears to be over and given their relationship, the Dow together with Crude oil could be gearing up to trade to new highs. Ideally, (but it is not necessary) the Dow would test the 17,800-18,000 ranges before making a break for 19,000.

This surge in bullish sentiment might provide the necessary impetus for the markets to let out some steam before attempting to trade to and past 19,000. 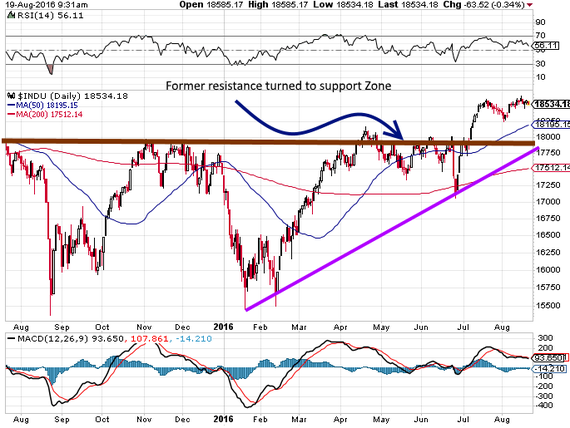 When mainstream media starts to jump on the bandwagon, we start to get nervous and so it is more likely that the Dow will test 17,800-18,000 ranges before surging to 20,000. This zone represents former resistance that has turned into support as indicated in the chart above.

Popular media outlets are just too bullish, and they are turning bullish after the market has surged to new highs; from a contrarian perspective, this is a negative development. The trend in all the indices is up, so the longer term outlook is still bullish. Forget Dow 20,000 for now; the Dow is more likely to trade lower than surging to new highs.

Consider the hour-glass; there is nothing to be accomplished by rattling or shaking; you have to wait patiently until the sand, grain by grain, has run from one funnel into the other.
John Christian Morgenstern