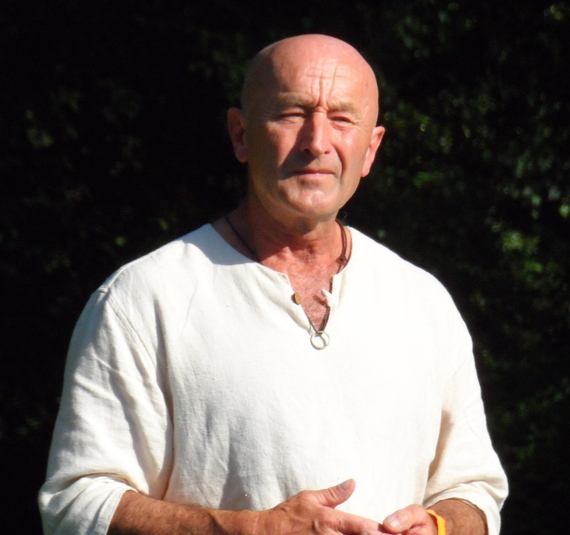 In 1984 I was employed as the head gardener at a leadership development center for corporate executives. I had somehow survived a colorful, illegal, and occasionally hazardous decade. At the same time I was involved in a driving accident - a head-on collision with another car in which the woman driving the other car was killed. It was a terrifying experience, and made all the worse for the fact that in spite of pleading for help, the occupants of a nearby house refused my request to call the emergency services. They were beside themselves with fear, and the wildly overwrought, bloodied and disheveled man who stood in their front garden, occasionally losing consciousness and trampling their flower bed, rendered them incapable of understanding the request. I was later found unconscious in the road at the site of the accident. At the inquest it was revealed that in all probability the woman deliberately drove her car at mine. This had been her threat as she left a pub some miles away, angry, hurt, and wanting to punish the lover who had rejected her.

Some months later, intrigued by the executives who visited our training center, I asked my boss if I could shadow one of the groups on an outdoor leadership task. He acceded to my request, only cautioning me that I must confine myself to silent observation and refuse any temptation to speak. A few days later I was in a river gorge with six middle managers from one of the UK's leading supermarkets. The day had begun well, but as the hours passed an inconsequential disagreement between two of the team erupted into a full-scale row. The trainer responsible for facilitating learning in the team had long since failed to contain or resolve the situation, and the row was allowed to escalate until one of the protagonists threw the first punch.

I had been quietly watching this drama, engrossed, entranced, and a little startled. I had no way of knowing whether this was normal for such training courses, but snatching glances at the trainer and witnessing the blood drain from his face, I judged it was not. I decided to break my promise, and interceded. I didn't know anything about leadership theory, but I did know about people and aggravated situations. When, some hours later, we eventually returned to the leadership center, the team was in great shape and profoundly relieved that the incident would remain unreported. Overnight I became a leadership trainer and facilitator, and three years later I was promoted to Head of Consultancy.

In 1989 I started my own leadership development business, and by 1994 we had started two additional businesses, one in Russia and one in Poland. With many international corporate clients our reputation became increasingly strong, and the business prospered. An even more exciting future drew closer when we won a contract with a small insurance company. Our task was to accompany this business as it strove towards its enormously ambitious commercial goals, so that when one day they sold the business, they could truthfully claim that they had achieved their goals while also remaining true to their values.

Five years later, and after a thrilling ride with our new client, the company was sold to Warren Buffet, and a fortune was made. David, one of our client's founders, came to me and asked me what my dream was. Without pausing I described a valley where I would create an enterprise that inspired people from all walks of life, to locate their gifts and energetically contribute them to "the world of our longing," a land-based social enterprise that sought to move people from sympathetic observers standing on the sidelines to engaged participants - people who understood the Hopi Nation elders' declaration that "we are the people we have been waiting for."

David paused, reached over for his checkbook, and filled out one of the checks. "Here, take this. Now you can live your dream."

It was enough money to buy 50 acres of some of Britain's most beautiful land.

I think back to that time and occasionally wonder how it was I found myself so immediately eloquent in describing this dream. Alongside my business I had also been enormously inspired and massively challenged by a group of Native Americans who mentored me for many years. This, and my own deep love of nature, my ever-increasing awareness of the huge social and environmental challenges confronting our world, my longing for a life in which my work was fully aligned to the things I most value, and the over-reaching desire to feel that I had indeed "lived while I was alive."

Now in 2015, Embercombe has positively impacted thousands of lives. Our world is still massively and increasingly challenged, but along with many others I have the deep satisfaction of knowing that when the invitation came, I did not turn away.

Mac Macartney is a social entrepreneur, an international speaker on leadership and sustainability, a coach and an author. In all aspects of his work he seeks to inspire people to step forward and contribute towards the emergence of a just, sustainable, and peaceful world. He is the founder of Embercombe, a land-based social enterprise located in the southwest of the UK.

He has been a faculty member for IMD Business School/WWF "One Planet Leaders" program in Lausanne for three years, and regularly contributes to the Exeter University Business School "One Planet Leaders" MBA program. Mac has co-facilitated leadership, values, and sustainability workshops with INSEAD Business School (Singapore), Lafarge, P&G (Europe), PepsiCo, and Nokia Siemens Networks amongst others. Recent and forthcoming speaking engagements include the Harvard Business School Club of New York, the Globally Responsible Leadership Initiative (South Africa), the International Academy for Collaborative Professionals (Vancouver), and the EC Retail Forum for Sustainability (Brussels). He has also spoken at three TEDx events.

For twenty years Mac was mentored by a group of Native Americans. This prolonged and challenging training has profoundly influenced Mac's worldview and continues to inform all aspects of his work with organizations, children, families, and youth.