The countdown has started for the arrival of Nowruz. For starters, Nowruz, meaning "new day" in Persian, is a festival that marks the beginning of solar New Year, and is celebrated by around 300 million people in the Middle East, West Asia, Central Asia, Caucasus and parts of Eastern Europe, even though the Iranian Diaspora enshrine and observe it wherever they happen to be, whether in New York and San Francisco or Paris and Amsterdam. Nowruz is celebrated by the people of Afghanistan, Azerbaijan, Kyrgyzstan, Tajikistan, Turkmenistan, Uzbekistan and other countries, but it historically hailed from the Greater Iran and continues to be its foremost national holiday.

Nowruz is an ancient Zoroastrian fiesta that has survived the passage of time through centuries and outlasted the malicious efforts of those who wished to obliterate it as they considered it to be a depraved ritual, and is now seen as an integral part of the cultural heritage of Iranians and all the nations that observe it, and an indissoluble hallmark of Persian civilization. It is characterized by the renewal of family reunions, paying tribute to the elderly, exchanging gifts, attending to the poor and the orphans, reconciliation with those with whom we've been at odds for some time and taking pleasure in the beauties of nature, which stand out quite noticeably at this particular point of time. And indubitably, Nowruz is a high season for artistic endeavors, when singers perform live nationwide or release their new albums, painters exhibit their latest artwork and families prefer to go to movies and theaters.

Recognized by the United Nations as an international holiday, Nowruz was inscribed in 2009 on the Representative List of the Intangible Cultural Heritage of Humanity. March 21 was proclaimed by the United Nations General Assembly as the International Day of Nowruz, even though the 2016 Nowruz falls on March 20. The ancient Iranians smartly capitalized on the transformations of nature and chose the first day of Spring as the beginning of their New Year and the first day of Jalali calendar, a modified version of which known as the Solar Hijri calendar is now in use in Iran and Afghanistan.

Nowruz is a festival of flowers, colorful confections and sweetmeat, dried nuts, local dishes and gracious messages of greeting and good wishes. In Iran, a country composed of several different ethnic and racial groups that form a patchwork of diverse cultures, Nowruz is a unifying element that brings the Iranian Azeris, Arabs, Baluchis, Kurds, Lurs, Turkmens and Armenians together for two weeks of jovial and uplifting celebration.

The Nowruz holiday begins on March 20/21 and continues for two weeks, concluding on the day of Sizdah Bedar, literally meaning "13th in outdoors." It's a celebration when the people flock to the forests, parks and plains on the 13th day of the New Year to spend some time together al fresco, enjoy the exquisiteness of springtime and consign the bad omen associated with the number 13 to oblivion and get prepared for the recommencement of business and work with improved vigor and strength. The government offices and banks are closed for the first five days of Nowruz, but the students and private workers usually enjoy the full two-week holiday. Newspapers also give themselves the first five days off and the printing usually starts from the sixth day of Farvardin, the first month of the solar calendar.

What makes Nowruz exceptional is its intertwinement with nature and the reflection of Spring traits in the customs and rites associated with it. On the first day of Nowruz, Iranians set up the Haft Seen table on which they put seven (Haft) items whose names in Persian begin with the letter "Seen" sounding "s." There's a specific story and idea linked to each item, and it's believed that Iranians historically used these articles to beautify their Haft Seen table spreads. "Nature" is the common theme that bonds all of these items intellectually. For example, there's red apple (Seeb) which symbolizes health and wellbeing. Or they put a sweet pudding made of wheat germ (Samanu) on the Haft Seen, which stands for affluence and beauty. There is vinegar (Serkeh) that represents long life and patience. And of course the inseparable part of Haft Seen is a hyacinth flower (Sonbol) whose heavenly fragrance heralds love and affection in the coming year and further underlines the well-built relationship between Nowruz and nature. There are objects on the Haft Seen table with names that don't start with the letter "Seen," but have a lofty position on the tabletop, including goldfish, mirror, candles, colored eggs and the Holy Quran or a book of poetry. Families conventionally compete with each other in preparing the most beautiful, attractive Haft Seen tables. 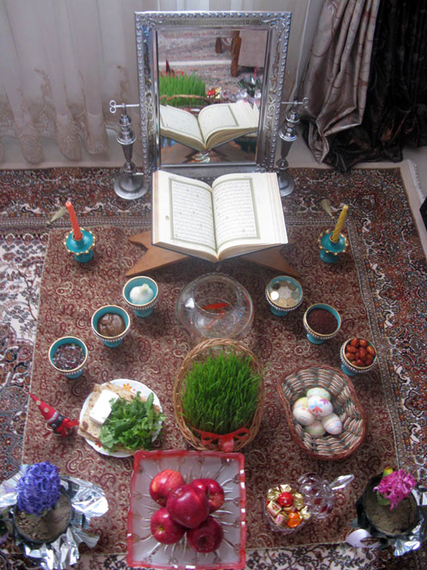 Iranians also place "Sabzeh" on Haft Seen, which is wheat, barley, mung bean or lentil sprouts they start growing in different containers a couple of weeks prior to the arrival of Nowruz, and by the time the Haft Seen is set up, it's almost fully grown up. On the day of Sidzah Bedar, which I talked about earlier, Iranians tie knots with the Sabzeh, make wishes, whisper some prayers and throw sprouts into rivers and canals, hoping that their wishes come true as the water would take the sprouts to undisclosed locations in larger bodies of water or seas.

In the lead-up to Nowruz, Iranians make extensive preparations and ensure that they're completely geared up for the arrival of the New Year. They believe they should refresh their houses, clothes and whatever seems to be manifesting the oldness of the year that's nearing its end. One omnipresent tradition during the final days of the year is Khaneh-Tekani (house shaking) when the housewives, with the help of spouses, begin a drastic process of cleaning literally everything unclean in the home, including rinsing the carpets and curtains, dusting the sitting room and bedrooms, mopping the floor and brushing the furniture.

My wife is already in the final stages of Khaneh-Tekani. We've bought our hyacinth flower and will be heading to bazaar in a couple of days to buy the goldfish and the sweetmeat, and of course the indispensable Iranian pistachio, which is a pivotal requisite for the Nowruz gatherings.

Those whose knowledge of Iran is confined to its nuclear program, human rights issues and embarrassing former president - said to be recently superseded by Donald J. Trump in terms of intolerability, might find something interesting in Nowruz that can open their eyes to new dimensions of life and culture in my misunderstood country.