Senator James Inhofe (R-OK) is famous for thinking that human-caused global warming is the "greatest hoax ever perpetrated on the American people." His belief presupposes the existence of a worldwide conspiracy--sustained over many decades--by scientists of all nationalities, races, creeds, and political leanings.

Inhofe's alleged perpetrators include NASA, NOAA, the Pentagon, National Academy of Sciences, American Physical Society, American Geophysical Union, and virtually every other research and scientific organization in the world. Such a conspiracy would require collusion on a massive scale to fudge data and consistently lie to the public and policy makers without getting caught. Extraordinary claim? You bet. 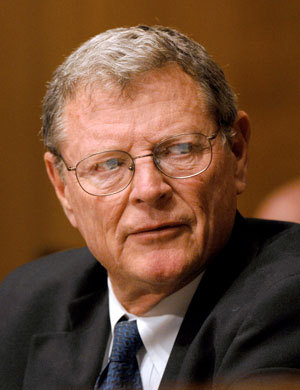 Carl Sagan popularized the skeptical mantra: "extraordinary claims require extraordinary evidence." Authentic scientific skepticism is an intellectual and scholarly pursuit that requires honesty, rationality, logic, and evidence. Real skeptics do not cling to absurd conspiracy theories for which there is no evidence, nor do they engage in obfuscation, misrepresentation, data fabrication, smear campaigns, or intimidation tactics. These are the methods of deniers.

Denier is defined by Webster as "one that denies." The word has been in the English language since the 15th century. The evidence for global warming is incontrovertible and our understanding of the human role is based on empirical data and universally accepted laws of physics. Some people deny it because it contradicts their predetermined beliefs. Put simply, deniers deny. And when they are powerful Senators, they also hold hearings.

Inhofe used his position as chair of the Senate Environment Committee to showcase his hoax theory and try to make scientists look bad. One would expect that such a vast conspiracy would generate a paper trail--even if perpetrated by the cleverest of science geeks. One might even expect a whistleblower among the ranks of scientists involved in climate research. But Inhofe's hearings turned up nothing.

When the Republicans lost the Senate in 2006, NPR Morning Edition's host, Steve Inskeep, announced that "...one of Washington's most powerful climate skeptics is about to lose his microphone." Why did Inskeep use that word to refer to Inhofe, who has never exhibited any of the characteristics of an authentic skeptic?

It's because deniers have been successful at two things. First, they simply co-opted the term. Calling themselves "skeptics" gave them a patina of credibility. Many members of the media apparently didn't know that legitimate skeptics do more than cast doubt and disbelieve, so they dutifully used the word that deniers used to describe themselves.

Second, they convinced journalists that "denier" is associated with the Nazi Holocaust and is purposefully used by scientists and their allies as a slur to dehumanize critics and silence debate. Never mind that it's a word whose meaning hasn't changed since the Middle English era. Editors and reporters were intimidated into avoiding it, as if it were an offensive racist or sexist curse.

It's been eight years since the Republicans lost control the Senate, and they just won their way back into the majority. Last week NPR's Morning Edition's covered the historic agreement between President Obama and Xi Jinping to limit greenhouse gas pollution. According to the report, any new climate legislation is unlikely because Inhofe is favored to resume his chairmanship of the Senate Environment Committee. Announcer Scott Horsley referred to Inhofe as "...one of the leading climate change deniers in Congress."

What a difference eight years makes. Thank you, NPR, for using the correct word this time. Please make it your policy from now on.