The National Rifle Association's annual meeting is this weekend and it's a galaxy of pro-gun stars!

Yes, in this celebration of all things that go bang, each of these NRA-sanctioned speakers will be offering their address before a crowd of disarmed gun enthusiasts. 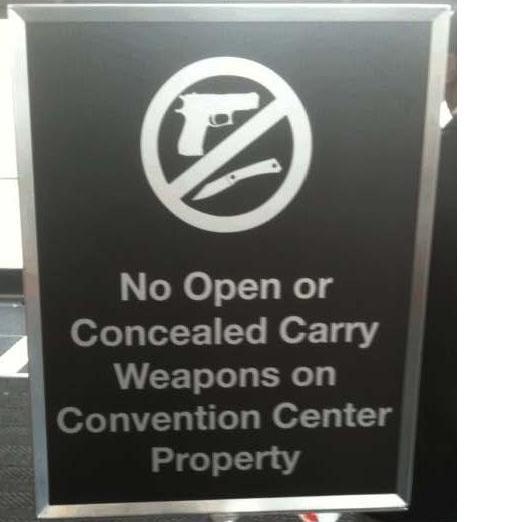 North Carolina State law prohibits the carrying of firearms in the Charlotte Convention Center, and the Time Warner Cable Arena. In addition, the Rules and Regulations of the Charlotte Convention Center prohibit the carrying of firearms in the Center. Pursuant to Time Warner Cable Arena policy, all individuals entering the Arena will be subject to a magnetometer security check.

To think that you'd have to suffer the indignity of going through a metal detector to hear someone proselytize about your right to carry your gun anywhere you want is easy irony.

So why is the NRA allowing their leadership, their membership, and their special guests--even NRA board member Ted Nugent, yes, even the Nuge!--to be forced to undergo the indignity of being stripped of their guns with little more than a whimper?

Well, because to do otherwise would frankly be nuts.

And despite complaints lodged on pro-gun message boards, the NRA knows this. And I'm willing to bet that the rationale offered by Ken at NRA headquarters isn't very satisfying to most concealed and open-carry fans:

Thank you for contacting us.

The Charlotte Convention Center does not allow the carrying of firearms, both open and concealed.

Thank you for your support!

The NRA could publicly gnash their teeth and caterwaul about mass disarmament resulting from the draconian rules imposed by the state of North Carolina and the dark overlords of the Time-Warner Cable Arena. Instead, they relegate the issue to a note on their website and a cheery e-mail from Ken. And that's because even the NRA is well aware that a heavily armed crowd numbering in the tens of thousands (as promised by the organization) is an invitation to mishap and even disaster.