WASHINGTON -- Gun control advocates marched to the National Rifle Association's Capitol Hill office on Monday, in an effort to pressure the powerful organization to stop standing in the way of reform.

"The NRA has blood on their hands," said Becky Bond, political director of the progressive advocacy group CREDO, which led the protest. "As one of the most powerful lobbies, the NRA has fought tooth and nail to weaken gun laws and is responsible for countless American deaths. In the wake of the terrible tragedy at the Sandy Hook Elementary school, the NRA must stand down and stop trying to prevent Congress from enacting sensible gun control laws that could save lives."

The NRA spent $2.2 million lobbying Congress through the end of September, according to the Center for Responsive Politics. The gun control lobby, on the other hand, spent just $180,000. In addition, the NRA dished out nearly $18 million in the 2012 elections, with most of it going to attack President Barack Obama.

Organizers estimated that around 200 people participated in the protest on Monday, including some political staffers who worked nearby and took some personal time to show their support for gun control.

The group met a couple of blocks away and then walked over to the NRA's offices, with some shouting, "Shame on the NRA!" While there, CREDO campaign manager Josh Nelson began the event with a moment of silence for the victims of the Newtown, Conn. shooting.

"The NRA takes tens of millions in corporate donations from gun makers and uses that money to lobby Congress and defeat anyone who opposes any gun-related law whatsoever -- even commonsense measures supported by the majority of NRA's members," Nelson said at the protest.

Honora Price has been personally affected by gun violence. When asked why she decided to come to the rally on Monday, she replied, "I don't really know if I can get through a whole sentence without crying."

"The NRA wants to defend people's rights to have any kind of gun at any time, with any kind of ammunition. This is not what the NRA used to be," Price said. "It used to be an organization for hunters, for people to belong to and it has turned into this terrorist, anarchist organization."

No one from the NRA came out during the protest. But Larry Ward, who works next door with the firm Political Media, decided to come out and defend the gun lobby. While he is a gun owner, he is not a member of the NRA.

"Quite frankly, I'm tired of the argument only being one-sided when there's a tragedy," he told reporters. "There's only one answer: more gun control, more gun control. ... This school was a gun-free zone, I believe. And the truth is, if there was one teacher or one principal armed that could have come in and ended the violence with one shot -- with one shot could have saved dozens of children."

When asked whether he believed teachers should also carry assault weapons, Ward responded, "If they have a weapon in their possession where it's safe, it's behind a lock and the teacher can get to it and aim it at the door when the person's walking into the classroom with their assault weapon -- yeah, I would not mind having a teacher protect them."

The NRA opposes banning assault weapons, even though a majority of the public favor such a measure. When Obama expressed support for renewing the assault weapons ban in the second presidential debate, the NRA went after him.

"Some gun owners took Obama at his word four years ago, when he said he wouldn't take their guns away," said Chris W. Cox, the executive director of NRA's Institute for Legislative Action, at the time. "So, after years of paying lip service to the Second Amendment, President Obama finally let it slip last night that he supports the most draconian form of gun control -- a gun ban."

Since the shooting in Newtown, the NRA has been silent and even took down its Facebook page. The NRA did not respond to requests for comment Monday.

Toward the end of the protest on Monday, the conversation went off-topic. A man started yelling, "Abortion!" over and over, telling the U.S. to repent for its sins. 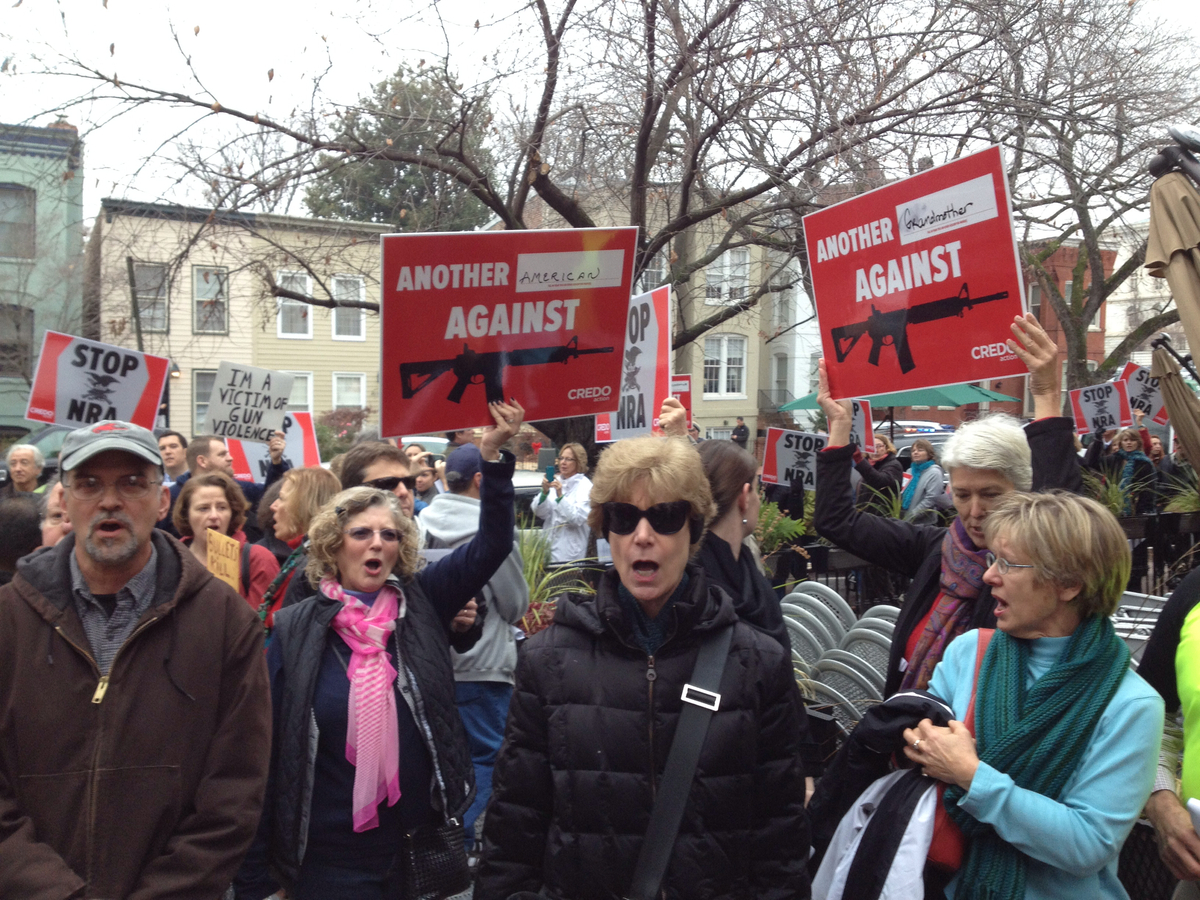 1 / 5
Protesters Gather At The NRA Offices In Washington, D.C.
Led by the progressive group CREDO, protesters marched to the National Rifle Association's offices on Capitol Hill on Monday, Dec. 17, 2012, to demand that the group stop blocking gun control reform.
HuffPost