The National Rifle Association (NRA) receives millions of dollars directly from domestic and foreign gun manufacturers and other members of the firearms industry through an organized corporate outreach program, according to a new report issued today by my organization, the Violence Policy Center. 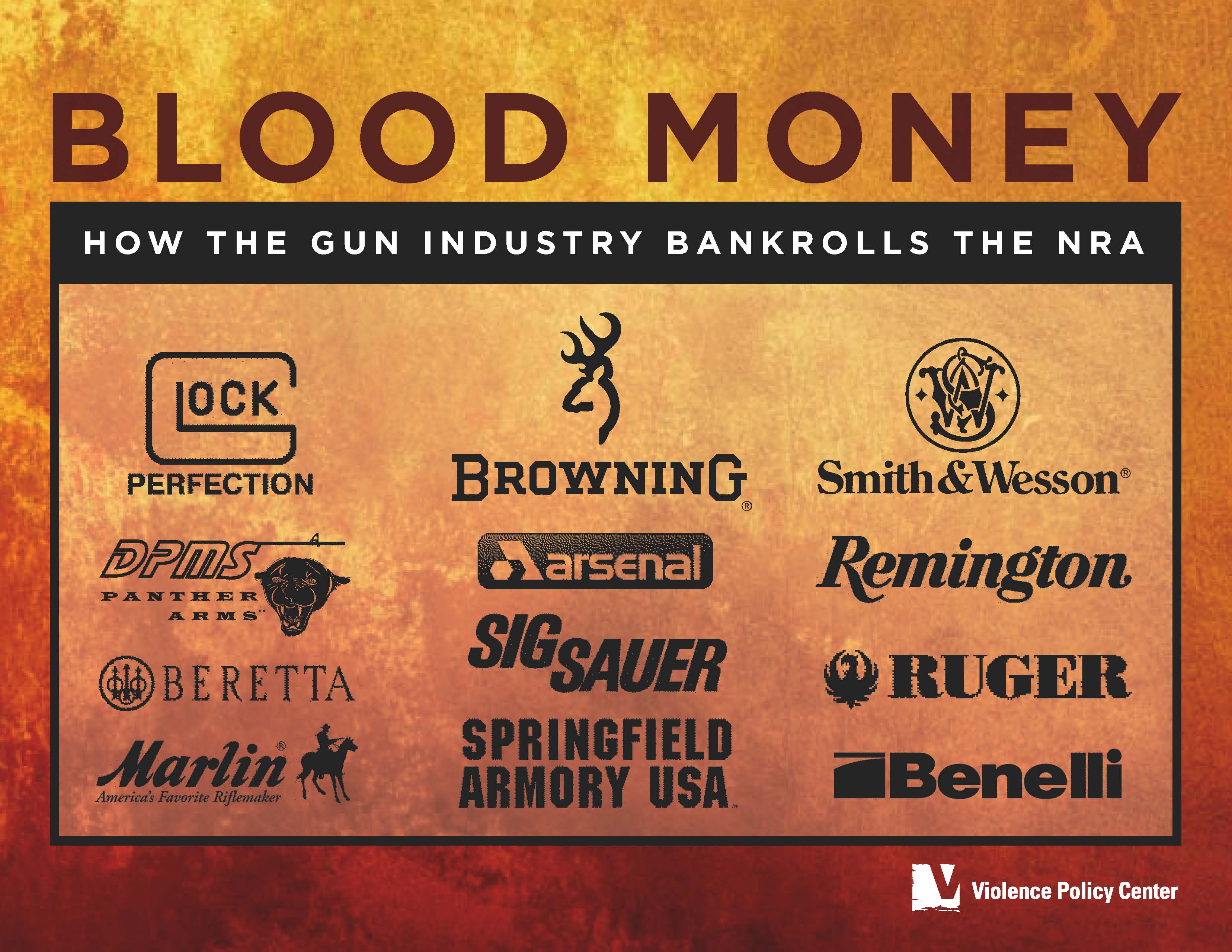 The report, Blood Money: How the Gun Industry Bankrolls the NRA, reveals that since 2005 contributions from gun industry "corporate partners" to the NRA total between $14.7 million and $38.9 million.

Total donations to the NRA from all "corporate partners" -- both gun industry and non-gun industry -- for the same time period total between $19.8 million and $52.6 million. The vast majority of funds -- 74 percent -- contributed to the NRA from "corporate partners" come from members of the firearms industry: companies involved in the manufacture or sale of firearms or shooting-related products.

There's also a companion YouTube video with the report.

Despite the NRA's historical claims that it is not financially allied with the gun industry, including the current disclaimer on its website that it "is not affiliated with any firearm or ammunition manufacturers or with any businesses that deal in guns and ammunition," NRA "corporate partners" include many of the world's best known gunmakers as well as such companies as Xe, the new name of the now infamous Blackwater Worldwide -- known for its abuses in the Iraq war -- which alone contributed between $500,000 and $999,999 to the NRA since 2005.

In a recent promotional brochure, NRA Executive Vice President Wayne LaPierre promises that the "National Rifle Association's newly expanded Corporate Partners Program is an opportunity for corporations to partner with the NRA... This program is geared toward your company's corporate interests." 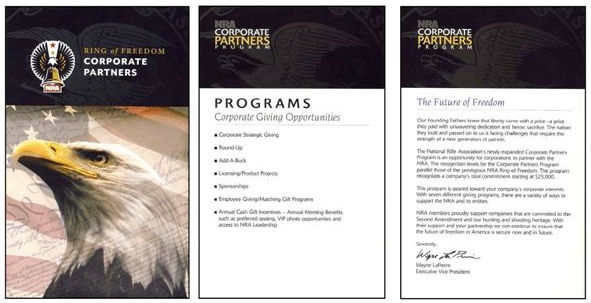 One of those companies is Brownells, headed by NRA board member Pete Brownell. The company describes itself as the "world's largest supplier of firearms accessories and gunsmithing tools." It sells a wide-range of high-capacity ammunition magazines for pistols and assault weapons, including the same capacity Glock magazine as the 33-round magazine allegedly used by Jared Loughner in his January 2011 attack in Tucson, Arizona, that left six dead and 13 wounded, including Representative Gabrielle Giffords (D-AZ). Brownells is also a manufacturer of high-capacity ammunition magazines. On his website supporting his campaign to join the NRA's board, Brownell offered his vision for strengthening the bond between the NRA and the gun industry and making sure that industry members are part of the NRA's mission:

Having directors who intimately understand and work in leadership positions within the firearms industry ensures the NRA's focus is honed on the overall mission of the organization. These individuals bring a keen sense of the industry and of the bigger fight to the table.

Of the 22 gunmakers, 12 manufacture assault weapons. Also among the NRA's "corporate partners" are numerous high-capacity ammunition magazine manufacturers or vendors.

One manufacturer, Beretta, donated one million dollars to the NRA to work to overturn gun control laws in the wake of the 2008 U.S. Supreme Court decision in District of Columbia v. Heller (which for the first time ever recognized an individual right to possess a handgun in the home for self-defense).

The NRA's top corporate benefactor, however, is MidwayUSA, which sells ammunition, high-capacity ammunition magazines, and other shooting accessories and has contributed between five and 10 million dollars to the NRA via its NRA Round-Up Program (which rounds up customer purchases to the nearest dollar with the difference going to the NRA) and other contributions. MidwayUSA founder Larry Potterfield credits part of his company's success to NRA-backed federal legislation, the Firearms Owners' Protection Act, commonly known as McClure-Volkmer (but called Volkmer-McClure by Potterfield):

By 1987, we were doing about $5 million in business, selling mostly to dealers. The product lines were bulk components and cartridge boxes. The Volkmer-McClure law was enacted in October 1987, which removed the restriction of shipping brass and bullets to FFL holders only. Midway immediately began selling directly to consumers, in addition to selling to dealers.

In January 2011 the company announced that for "a second consecutive year" it was serving as "the Official Sponsor of the NRA Annual Meeting and Exhibits..." being held in Pittsburgh, Pennsylvania later this month.

One Pittsburgh resident who apparently took part in the NRA's Round-Up Program through MidwayUSA was concealed carry permit holder George Sodini, who in August 2009 opened fire at an LA Fitness Center in Collier, PA, killing three women and wounding nine others before turning the gun on himself and taking his own life. A copy of the e-mail receipt sent to Sodini from MidwayUSA for his purchase of 9mm and .45 ammunition that was shipped to him courtesy of McClure-Volker includes a donation of 74 cents from the mass shooter to the NRA via the Round-Up Program.

The NRA claims that its positions are driven solely by a concern for the interests of gun owners, never mentioning its own financial stake in protecting the profits of its gun industry patrons. The mutually dependent nature of the National Rifle Association and the gun industry presents a new context -- dollars and cents -- in understanding the NRA's unwillingness to compromise on even the most limited controls over firearms or related products (such as restrictions on high-capacity ammunition magazines).

At the 2009 Conservative Political Action Conference (CPAC), NRA Executive Vice President Wayne LaPierre told a cheering crowd that "the guys with the guns make the rules." The information contained in the VPC's new report raises the question as to what degree it is the guys who make the guns who make the rules.