It’s been a week since the mass shooting at Santa Fe High School in Texas, and the National Rifle Association has had time to make sense of why, exactly, this happened.

It’s because of an abundance of doors. And junk food. And not believing in God.

These are the things the NRA has blamed for 10 people being killed and 13 people being injured in last week’s massacre. Not once did the gun rights group raise concerns over the shooter’s easy access to firearms ― the 17-year-old student just used his dad’s guns ― or acknowledge that school shootings are now happening with such frequency in America that kids are developing post-traumatic stress disorder.

But the NRA says guns aren’t the problem. Here’s a look at all the other things the group has said are the reasons for the horrifying uptick in gun violence at schools.

A “culture of violence”

Incoming NRA president Oliver North said the solution to mass shootings at schools is to focus on the “disease,” which is not about easy access to guns.

“The disease is youngsters who are steeped in a culture of violence,” North said on Fox News Sunday. “They have been drugged in many cases. Nearly all of these perpetrators are male and they are young teenagers in most cases.”

NRATV host Grant Stinchfield said it’s helpful to offer “thoughts and prayers” after every mass shooting because it brings God back into the discussion.

“Taking God out of our culture ... is at least partly to blame for the violence we see today,” he said on his Monday show.

Too many doors in schools

Texas Lt. Gov. Dan Patrick, a fierce opponent of gun control, said the Santa Fe shooting may have been caused by schools having “too many entrances” and that it may be time “to look at the design of our schools moving forward.”

NRA board member Ted Nugent said Tuesday that kids’ unhealthy diets are making them want to shoot up their schools.

“Mark my words when the studies are finalized, you will find that Columbine, Virginia Tech, Aurora, certainly Sandy Hook, these maniac murderers in Parkland and now Santa Fe, if you really studied the slovenliness and the zombie-like conduct of these murderers, you go back to their diet and examine what they’ve put into their sacred temple, and it’s all garbage,” Nugent said in an interview on Newsmax TV, a conservative media outlet.

“I know people think I’m trying to get away from the gun issue, but it’s not a gun issue,” he added. “It is a conduct issue.”

North said the combination of kids growing up in a violent culture and then taking medication for attention deficit hyperactivity disorder is causing a spike in school shootings.

“They have come through a culture where violence is commonplace. All you need to do is turn on the TV, go to a movie,” he said on Fox News Sunday. “If you look at what has happened to the young people, many of these young boys have been on Ritalin since they were in kindergarten.”

The overmedication of children

“The problems that are producing scores of isolated young disturbed children who have convinced themselves that murdering their classmates is the way to get attention will not be solved at the gun store. It is in the home,” Loesch said Tuesday on an NRATV segment titled “The Overmedication of Children Is an Epidemic.”

“It’s about the kind of people we’re raising these kids to become,” she said.

“When are we going to be completely honest and acknowledge the awkward, bullied, sexually frustrated, psychotropic drug-laced, suicidal, mass shooters in the room for what they are?” he said on a Sunday NRATV segment. “Or are we just going to keep acting like we don’t know what’s going on in the name of not confronting the miserable reality that they are a creation of our so-called progressive culture and media?”

In the same segment, Noir blamed school shootings on parents failing to teach their kids “how to cope with the harsh realities of life.”

“We shield them in safe spaces and give them participation trophies incentivizing mediocrity, and tell our young boys that their masculinity is toxic and our young girls that being a woman means acting like a man, further confusing the hell out of kids who are naturally going to struggle with their identity as is,” said Noir.

“I place some of the blame on the #MSM. They recruit new players to their dark real life mass shooting reality show,” he tweeted.

PHOTO GALLERY
These Dogs Are Also Out Marching For Gun Reform 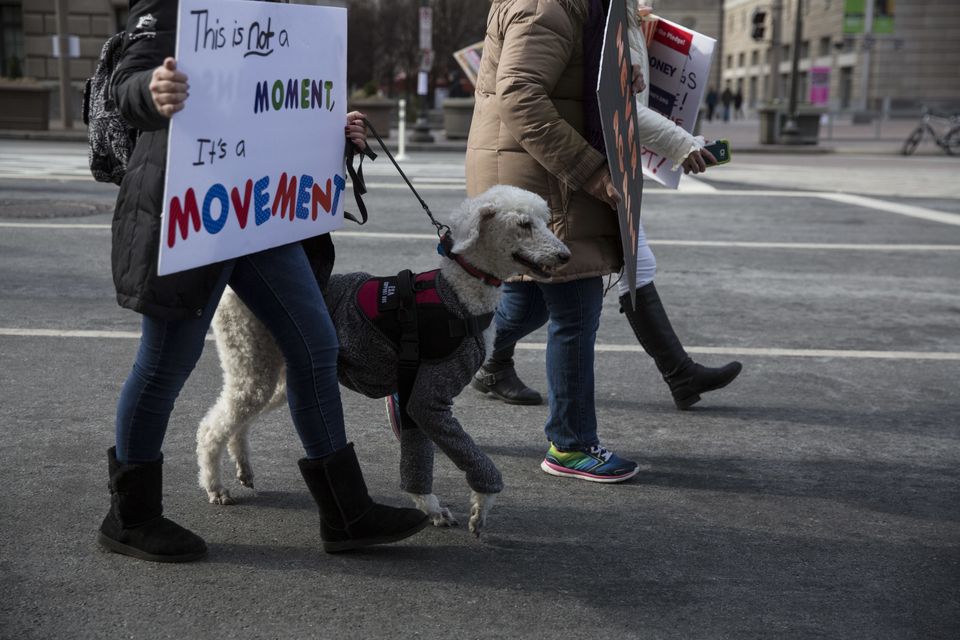 1 / 9
Demonstrators&nbsp;walk with a&nbsp;dog during the March For Our Lives&nbsp;in Washington, D.C., with one person holding a sign reading, "This is not a moment, it's a movement."
Bloomberg via Getty Images