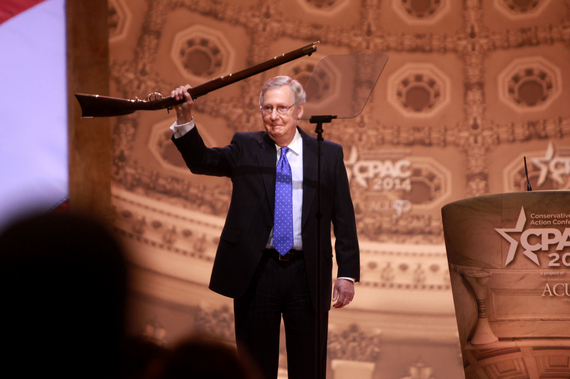 Apparently, that's the only headline--and it would need to have appeared above the fold in every newspaper and media website around the country--that would have satisfied some people. Yes, this is now a thing.

They are out there, complaining about--get ready to facepalm--the coverage of the first American to win a gold medal at the Olympics in Rio. The level of victimhood among a certain subset of NRA/2nd Amendment types has reached a new level of absurdity.

A post, titled "INCONVENIENT FOR MAINSTREAM NARRATIVE: First Gold Medal goes to American in *gasp* shooting" purports to demonstrate how the media ignored the "inconvenient truth" about how our country won its first gold medal (I'm sure Al Gore is feeling the burn--note the spelling, please--right about now).

The aforementioned post appears at a site called "Guns Save Life" (apparently the copy editor's life wasn't the one saved). The poster includes screenshots from CNN and Fox News (!) to complain that they didn't identify the event in the headline of their stories--front page stories, mind you. This complaint might be a valid one, except for the fact that each headline included a photo of gold medalist Virginia Thrasher holding something. What was it, you may ask? A rifle. But yes, people might have been confused and thought she won the gold medal in rhythmic gymnastics.

Another post lamented a few people who wrote snarky tweets about gun violence in the U.S. in reaction to Ms. Thrasher's victory. While this post from the website Independent Journal was less hysterical than the one about media coverage, that is a low bar to clear. It claims to have a million views and 106,000 Facebook shares. This really is a thing.

I first learned about these, er, concerns from a friend who is hooked into this whole scene and complained about the media being insulting and derisive, showing their bias against guns. I replied to him with a link to the New York Times article about Ms. Thrasher. The first word in their headline? Sharpshooter.

It's hard not to laugh at this kind of stuff. But what it demonstrates is the degree to which many people live in an absolute echo chamber where lies are so deeply ingrained that they become truth. Of course the media downplayed that this victory was won by someone shooting a gun, because the media hates guns and gun rights. You know that it's true if everyone you interact with repeats it often enough. You don't bother checking for yourself, because you already know the answer. And this isn't just something we see from the right on the issue of guns. Of course Romney won Ohio, it's a sure thing according to what everyone you know has been saying for weeks.

I don't know if there is anything that can be done to bring people out of this cult of ignorance, a world in which the NRA--which has won just about every legislative battle it has fought at the federal level--is the victim, and the deck is just stacked against gun owners. Nevertheless, we must fight to make sure--in the words of Arthur Weasley (or, if you prefer, William Shakespeare)--Truth will out.