If Google wasn't cooperating with the National Security Agency's spying program, as the company has vehemently claimed again and again, why were the guys in charge of each organization emailing so much in 2011 and 2012?

That's the question raised by a series of emails between then-NSA director Keith Alexander and Google chairman Eric Schmidt and co-founder Sergey Brin starting in late 2011. The emails were published by Al Jazeera America on Tuesday.

The correspondence suggests a close relationship between the NSA and Google before former NSA contractor Edward Snowden ever leaked documents detailing the agency's online spying efforts. One of the two email chains describe a meeting between the NSA director and Google executives near an airport in San Jose, Calif.

"When we reach this point in our projects we schedule a classified briefing for the CEO’s of key companies to provide them a brief on the specific threats we believe can be mitigated and to seek their commitment for their organization to move ahead," Alexander wrote in June 2012 email to Schmidt. "Google’s participation in refinement, engineering and deployment of the solutions will be essential.”

When Schmidt wasn't able to attend, he enthusiastically responded, "Would love to see you another time. Thank you !" See the entire message below: 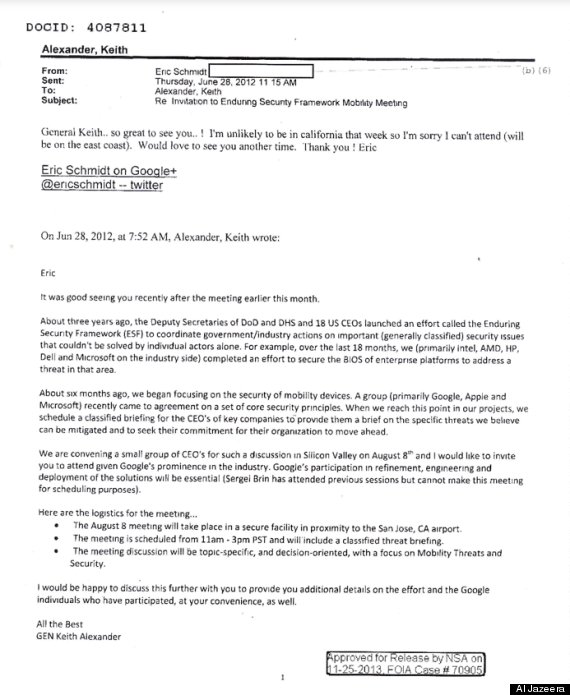 You can read the full email exchanges over at Al Jazeera

"We work really hard to protect our users from cyber attacks and we talk to outside experts, including occasionally in the US government, to ensure we stay ahead of the game," a Google spokesperson told The Huffington Post. The company provided the same comment to Al Jazeera America.

Google executives have maintained since the Snowden revelations that the search giant does not give the U.S. government access to its servers and the personal information of its users unless it is legally compelled to. If the government does have such access, Google does not know about it, Schmidt publicly stated in November.

These emails don't directly contradict that claim by Google. But they do suggest a cozier relationship between Silicon Valley and the state than the Googling public should be comfortable with.