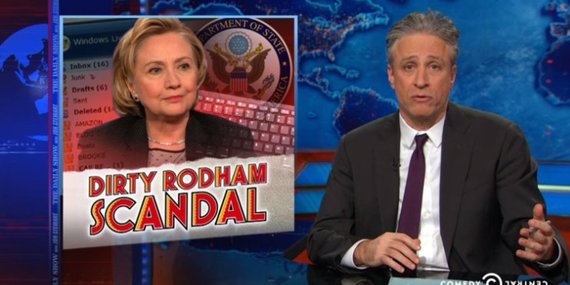 Political attacks against Hillary Clinton often times make for good comedy, which is why during this Daily Show segment, Jon Stewart asks the following questions:

"Don't we have a facility in Utah that collects all of our emails, anyway, solving the whole archive problem?" he asked. "Can't you just ask them, or they don't f*cking talk to you, either?'

In addition to Stewart, Jimmy Fallon also weighed in on the controversy. The Tonight Show host explained that "Obama said, 'Don't worry, we saw them" since the government sees "everyone's emails."

Like I stated in my appearance on MSNBC's The Last Word with Lawrence O'Donnell, comedy is the perfect antidote to the confusion and fear associated with politics in 2015. Obviously, Stewart and Fallon are mocking the outrage over this latest news frenzy while at the same time poking fun at the NSA's collection of your phone calls and emails. However, even though "Emailgate" might be a meaningless controversy (I doubt Clinton was writing love letters to Vladimir Putin or working to carve out her own empire like Aaron Burr), there are some questions that should be asked by all Americans.

What if we found out that Dick Cheney had been using a private email address as Vice President?

Imagine that during the lead-up to the Iraq War, for some reason Cheney began using a private email account with a server located in his house. Certainly, you would trust this face as much as you do Ms. Clinton's, correct? Currently, Americans are waiting for the former Secretary of State's private emails (as a public employee), however there are issues of fairness associated with this delay.

True, there might be classified national security information in these emails, but again, if there is indeed such information, how safe was it on Clinton's personal servers?

Finally, if the NSA can collect your data without a warrant, why is Hillary Clinton afforded the opportunity to take her time with disclosing emails that essentially belong to the American public?

This scandal isn't as egregious as members of the Bush administration leaking the identity of a CIA agent. Also, it certainly isn't as bad as when President Bush began the domestic spying predicament that we currently face. According to a Washington Post article in 2005 titled President Acknowledges Approving Secretive Eavesdropping in U.S., the government has spied on Americans for over a decade:

President Bush said Saturday he personally has authorized a secret eavesdropping program in the U.S. more than 30 times since the Sept. 11 attacks and he lashed out at those involved in publicly revealing the program.

...Angry members of Congress have demanded an explanation of the program, first revealed in Friday's New York Times and whether the monitoring by the National Security Agency violates civil liberties.

...Appearing angry at times during his eight-minute address, Bush left no doubt that he will continue authorizing the program.

Therefore, even though she's a respected figure admired by millions of Americans, Clinton shouldn't have the luxury of circumventing the NSA's long reach. You don't, why should she?

In fact, it's probably more important to national security that her emails are disclosed (the one's that aren't sensitive, which again leads to the question of why sensitive emails were stored on her private servers to begin with) than information derived from warrantless searches on the average American. In a Wired article titled Why Clinton's Private Email Server Was Such a Security Fail, the issue of storing classified information on home servers could turn into a grandiose subject:

... If the same sort of highly resourced hackers had gone after the server in Clinton's basement, there's no guarantee that the same alarms would have gone off.

When a simple "Whois" search on the internet reveals the private email address of a former Secretary of State, this "security fail" could possibly lead to other security fails. There are genuine concerns pertaining to a breach not only of protocol, but of security, and an onlooker's level of interest towards this scandal is linked directly to his or her political outlook.

Liberals see 'Emailgate' as yet another vapid political attack against Clinton, conservatives view the issue as another example of a Clinton lying, and apolitical observers are simply munching on popcorn and enjoying the coverage. Nonetheless, even if this is simply a political stunt by Republicans, Americans should use a resource that for years has been seen as an intrusion on the privacy for most people. There's nothing wrong with asking the NSA to disclose records of Hillary Clinton's emails, before the State Department and before she has the ability to pick and choose emails that are less damaging from a public relations perspective.

Jon Stewart, Jimmy Fallon, and everyone else who rightfully saw the absurdity in this controversy could be correct; I doubt there's anything to fear about Hillary Clinton's breach of conduct. Even though it was "highly unusual," we might eventually find out that this was all simply another GOP sideshow on the road to 2016. However, if POLITICO is correct and Hillary Clinton's email debacle is "not likely to end soon," then Americans have a right to ask an unlikely source for help.

The NSA has sometimes been used to spy on us. Now it can be used to help uncover whether or not any security threats resulted from Hillary Clinton's decision to utilize a private email account and server. If hundreds of thousands of emails were on Clinton's private servers, then they're fair game for the NSA, just like the emails you write on a daily basis. If Wired has already called it a "security fail," then the NSA should do what it does best and hand over the information it has on Clinton's email servers.