Americans are divided over whether Edward Snowden did the right thing or the wrong thing in leaking information about top-secret NSA phone and online surveillance programs, according to a new HuffPost/YouGov poll. But those paying the most attention to the story were far more likely to say that Snowden had done the right thing.

According to the new poll, 38 percent of Americans think that Snowden releasing top-secret information about government surveillance programs to the media was the right thing to do, while 35 percent said it was the wrong thing. Twenty-eight percent said they weren't sure.

Democrats in the poll were the most likely to disapprove of Snowden's actions, with 43 percent saying he had done the wrong thing and 30 percent saying he'd done the right thing. Republicans were divided, 37 percent to 37 percent, over whether what he did was right or wrong. Independents were most likely to say he did the right thing, by a margin of 44 percent to 27 percent.

Fifty-six percent of independents not leaning towards either party who had heard at least a little about the program said that Snowden did the right thing.

The fact that 28 percent of respondents to the HuffPost/YouGov poll said that they were unsure of whether Snowden had done the right thing is unsurprising. Surveys on the NSA's collection of American Verizon customers' phone records -- one of the programs Snowden was responsible for leaking -- have shown little consensus around opinions of that program, and much variation apparently driven by differences in question wording. 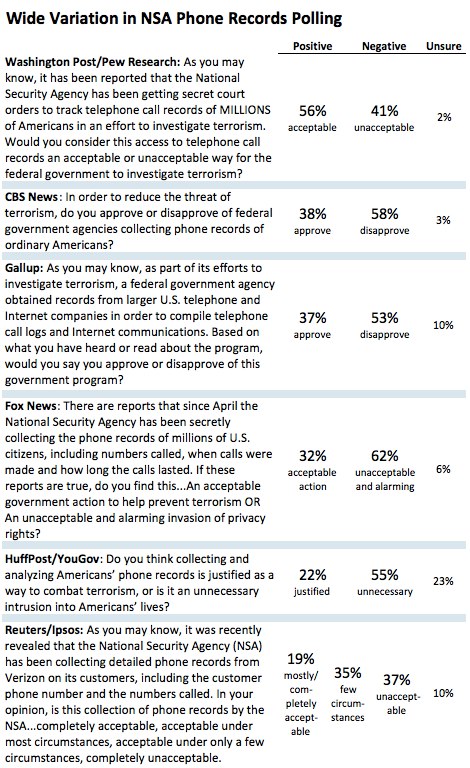 Two of those surveys, a previous HuffPost/YouGov poll as well as a Pew Research Center/Washington Post poll, found that Americans have paid relatively little attention to stories about the program, making results particularly sensitive to how the program is described. Those results also suggest that relatively few Americans have preexisting opinions of the programs Snowden leaked, making it difficult for many to cast judgement on his actions.

Still, in a CBS News poll, respondents said by a 57 percent to 30 percent margin that they think information about the NSA programs being made public will have no impact on future U.S. efforts to prevent terrorist attacks -- although that question came last in a long series of other questions about the program.

And 50 percent of respondents said that they think the U.S. government has gone too far in restricting civil liberties in the effort to fight terrorism, while 24 percent said that the balance has been about right and 9 percent said it has not gone far enough.

Sixty-four percent of Republicans, 57 percent of independents and 31 percent of Democrats said they thought the government had gone too far.

There was little partisan division, on the other hand, over whether Americans should need to sacrifice freedom and privacy to be safe from terrorism.