Usually an annoying popup brushed aside with a click, error messages on Microsoft's Windows operating system may also serve as a way for the National Security Agency to spy on you.

When a Windows program seizes up, someone using a PC can choose to send an error report to Microsoft for review. But Windows owners may inadvertently be sending those error reports to the NSA too, according to a report on Sunday by German magazine Der Spiegel detailing the work of the Tailored Access Operations division of the NSA, which is considered the agency's top hacking unit. The revelations come from the latest document leaks of former NSA contractor Edward Snowden.

An NSA presentation obtained by Der Spiegel noted that the crash reports are a "neat way" to gain "passive access" to a machine. The team can use the NSA's massively powerful sleuthing software to cherry-pick error reports from the global stream of Internet traffic. Only data sent from a computer can be collected this way, but it can give the NSA something crucial for further hacking: the vulnerabilities of a target's computer.

One internal graphic suggests NSA agents mocked how easy the Windows error messages made their jobs: 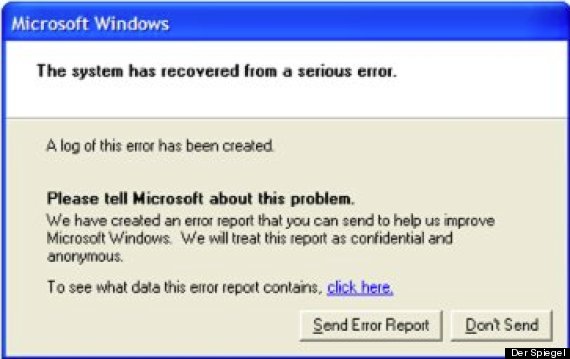 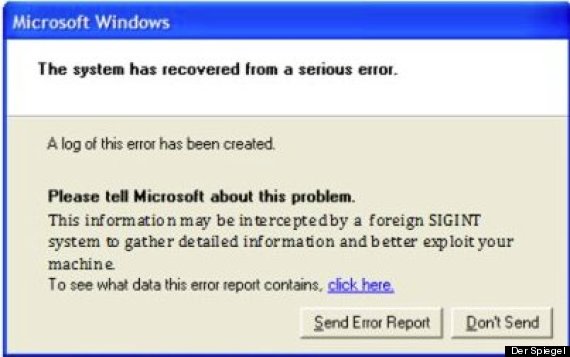 Like other tech companies, Microsoft has been in a tough position since Snowden's leaks began. A report from The Guardian in July found that the company may have handed the NSA access to the customers' encrypted messages and data. In recent months, Microsoft has attempted to assuage fears of government surveillance by fighting against any attempt by U.S. intelligence agencies to seize its foreign customers' data under American surveillance laws.

"Microsoft does not provide any government with direct or unfettered access to our customer's data," a Microsoft representative said in response to the latest allegations. "We would have significant concerns if the allegations about government actions are true."