It may have been stormy outside Atlanta's Spivey Hall last Saturday night, but inside, a rapt crowd was all ears as buzzworthy jazz singer René Marie and her nimble combo performed their version of the great American songbook, tackling everything from Dobie Gray's 1970s hit "Drift Away" to the folk classic, "John Henry."

Even the Hall's Executive and Artistic Director, Sam Dixon, who books world-class artists such as Itzhak Perlman and Ellis Marsalis into the venue annually, was floored by Marie's "richly expressive vocal nuance" and "ability to inhabit vastly different musical worlds."

Although Jefferson Airplane's "White Rabbit" and The Temptations' "Just My Imagination" aren't considered national treasures in the vein of "Shenandoah" and "My Country 'Tis of Thee," Marie's just-released Voice of My Beautiful Country reimagines them all as equal, tonally and socially. 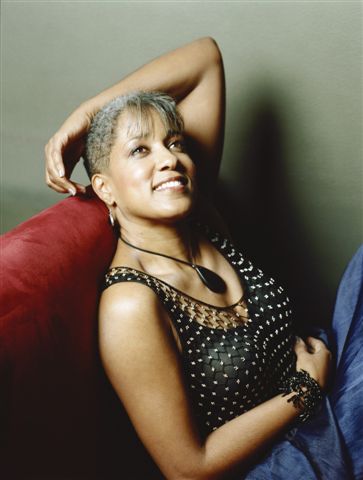 In the jazz realm, where fans are finicky and standard remakes a dime a dozen, Marie's Country (her eighth album, and once-again lauded by NPR) is grabbing headlines for both quality and controversy: while Marie and pianist Kevin Bales heat up Dave Brubeck's "Strange Meadowlark" to a pleasing percolation, her rousing fusion of "Lift Every Voice and Sing/Star-Spangled Banner" had her in hot water with everyone from the Governor of Colorado (then-mayor of Denver, John Hickenlooper) to Barack Obama long before the song was officially released.

"We had already been doing the song live for a least a year before we were asked to perform the National Anthem at the State of the City Address in Denver on July 1, 2008," Marie explained in our recent interview. "And just two months earlier, folks from the mayor's office were even there [at my show]." At that State of the City event, Marie chose to sing the traditional anthem melody with the words of "Lift Every Voice" (a.k.a. the "Black National Anthem"). As an alternative to an official apology, she gave out her personal cell phone and email address -- and weathered the storm, including an admonition from Obama (at that time the democratic candidate for President).

Marie has never been one to take the easy road. Nearly 15 years ago at age 40, after 23 years of marriage, she left her husband and a confining life as a Jehovah's Witness to begin her music career with a jazz group playing at a Ramada Inn in Roanoke, Virginia. Her first few recordings were no less content-driven than Voice of My Beautiful Country; a 2001 mashup of the Confederate-era "Dixie" with "Strange Fruit," the 1939 Billie Holliday hit that originated as an anti-racism poem by Abel Meeropol so raised the eyebrows of veteran jazz drummer Jeff "Tain" Watts, he almost refused to play on it -- until she explained her intentions and sang it a capella for him. She'd already released a benefit single inspired by the racially-motivated events in Jena, Louisiana in 2007 and was working on her one-woman play about domestic violence, Slut Energy Theory, at the time of the Denver anthem incident.

Artistically, Marie's brave choices have paid off. The woman who discovered jazz at 17 when she "went to see Lady Sings the Blues at the movies just so I could watch Diana Ross" always envisioned her repertoire to include the songs that influenced her at various points in her life -- whether it was the Beatles' "Hard Days Night" (which appears on her 2004 album, Renegade Serenade) or "I Loves You Porgy" from the Gershwins, as adored by Mitch Miller & His Gang, whom Marie's parents played nonstop before they divorced when she was 9.

The inspiration for Voice of My Beautiful Country was borne from a 2007 interview Marie conducted with a Russian reporter who asked her about being an "American" performer.

"That's when the spark came," Marie says. "The surprising realization that I hadn't considered myself 'American' in that sense before. Then I had the flashback of my living under Jim Crow laws. I wanted to take the patriotic themes [of all those traditional songs] and redo them to my perspective. Something was missing in those renditions: the black experience. By bringing in jazz, gospel and blues influences, I wanted to show there's more than one way to love my country."

In light of the controversy surrounding her performance of "Lift Every Voice and Sing/Star-Spangled Banner," Rene Marie wants to know what the American public really thinks about their beautiful country. Comment below or upload photos, videos, poetry and more at voiceofmybeautifulcountry.com about what America means to you.