When future generations of Iranians and Americans look back at the deal with Iran over its nuclear program in Vienna in July, they will certainly consider it a victory for dialogical diplomacy and patient policy-making. But they will also remember it as an opportunity for Iranian civic actors to enable and empower Iran's civil society space.

In the last 25 years Iran has been on a course of a major political and societal evolution, as the increasingly young population has become more educated, secular and liberal. An explosive mix of a growing population -- which led to a youth bulge -- combined with urbanization, an increasing unemployment rate and the rapid expansion of university education, produced new sociological actors in Iran who were essentially young and educated (and mostly women, in fact) but with no political, economic or social future. As a result, a generational gap divided Iranian society between moneymaking and powerful conservatives and young rebels without a cause. Iran became a society divided between Donald Trumps and James Deans. On one side are those who use power to make money and on the other side are those who are rebellious against the social and political order.

Therefore, it is not strange that the Iranian youth have been at the forefront of support for the nuclear deal because they have suffered much from unemployment and the Iranian currency devaluation as a result of the sanctions. Whether as Internet users or spontaneous demonstrators, the young population of Iran, which represents today more than 60 percent of 80 million Iranians, are well educated and believe in gradual change of the Islamic Republic of Iran. Interestingly, over half of Iranians between the ages of 18 and 24 attend some form of higher education and, according to data from 2003, more than 60 percent of entrants into Iranian universities are women. Also, young people in Iran use the Internet at a far greater rate than in the rest of the Middle East. The civic rebellion of 2009 was arguably the manifestation of such changing attitudes that have been slowly emerging among Iran's young people. This attitude is still present, and it undermines the legitimacy of the theocratic government.

Meanwhile, economic mismanagement and corruption became a common enemy that bound protesters together across classes in 2009. Surprisingly, today, the same solidarity is palpable in support for the nuclear deal. When the July 14 deal was announced, thousands of young Iranians took to the streets of Tehran to celebrate a new chapter in Iran's relations with the world. They held photos of Mohammad Javad Zarif, the foreign minister, not of Ayatollah Khomeini or Ayatollah Khamenei. Some young participants even held up pictures of Mir Hossein Mousavi and Mehdi Karroubi, two 2009 presidential candidates who have been under house arrest for the past four years due to their opposition to the government.

Since the election of Mahmoud Ahmadinejad to the presidency in June 2005, Iranian and international observers alike have been studying how and why Iranian civil society space was shrinking and the resulting social, political and human consequences. Analysts almost universally agree on the fact that the antagonist position towards civil society was the defining feature of Ahmadinejad's administration from 2005 to 2013. During this period, reforms made during the tenure of President Mohammad Khatami (1997-2005) were not only rolled back, but Iranian civil society also experienced threats or challenges in its legal, regulatory and policy environment. Clearly, the outcome of Mahmoud Ahmadinejad's presidency was the intensification of the internal crisis between popular sovereignty and authoritarian rule at the heart of the Islamic Republic's political framework. And what became even more visible was a political struggle between the republican essence of Iranian civic policy-making and its clerical counterpart. 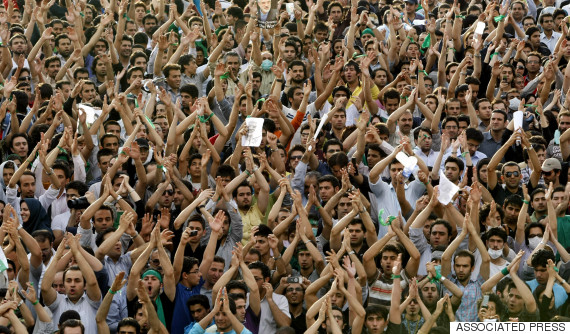 The presidential election in 2009 changed the destiny of the Iranian civil society. The unprecedented protests that followed the elections presented serious challenges not only to the political credibility of Mahmoud Ahmadinejad, but also to the moral status of the theological sovereignty and its legitimacy in the world. The public anger and the ensuing infighting among the founding architects of the revolution presented the most serious challenge to Iran's clerical regime since it replaced the shah in 1979. Those among the reformists who believed that the system allowed scope for reform found themselves face-to-face with a theological-political structure that used extreme violence to ensure its legitimacy. Others who dared to speak out for Iranian civil society risked imprisonment, torture, rape and execution. The intensified crackdowns on journalists, intellectuals, students and women activists followed by economic difficulties pushed vast numbers of young and educated Iranians into exile.

However, the socio-political crisis that followed the election was deeply rooted in internal power struggles. Moreover, it represented and continues to represent a crisis over the deep-seated ideological structure inherited from the revolution. On the one hand, those like Mousavi, Karroubi, Khatami and Rouhani -- who have been among the architects of the Islamic regime and the challengers for the presidency or presidents themselves -- believe that the Islamic nomenclature allowed for reform and renewal. Opposing them and their allies in Iranian civil society are conservative and ultra-conservative groups who continue to believe in the rule of the jurist (velayat-e faqih) as the main blueprint for the organization of Iranian society. Among the myriad of Iranian political factions, the conservatives and ultra-conservatives have always played an important role in defending and promoting their key unelected political bodies -- like the Assembly of Experts, the Council of Guardians and the Expediency Council -- against the presidency and civil society. From the very beginning, ultra-conservative groups criticized and sabotaged the Rouhani administration's domestic and foreign policy achievements.

What made Rouhani's election even more surprising was that he was not considered close to Iran's supreme leader, but he received the green light to bring back a spirit of openness to Iran's foreign policy anyway. In fact, Rouhani's main challenge in the past two years has been to maintain a balance between different pressure groups and to prevent any one group from becoming strong enough to challenge him.

But Rouhani also needed to keep up the spirits of Iranian civil society by waging an uphill battle against mismanagement, corruption and the violation of human rights, which have all contributed to the decline of Iranian diplomacy. It is true that nobody expected a sudden reversal in the establishment's stance towards civic actors. But it goes without saying that Rouhani's election was a huge opportunity to ease Iranian civil society out of eight years of political distress caused by Mahmoud Ahmadinejad's intemperate rule. Most importantly, Rouhani's election clearly demonstrated that while politics in Iran can be manipulated, it cannot be fully pre-ordained. After his election and the nuclear deal, hope for change in Iran was reinvigorated, leading to greater participation, dialogue and dissent within Iranian civil society.

The Vienna agreement was a major milestone for the geostrategic future of the Middle East, but it was also a breath of fresh air for Iranian civil society. Undoubtedly, gradual relief from sanctions that have suffocated Iran's economy will give breathing space to demands for more rights and freedoms. There is now the possibility of Iranian civil society playing a different and more constructive role in the future of Iranian politics. According to a recent report published by the International Campaign for Human Rights in Iran, a high percentage of prominent Iranians representing different professions believe that the deal will have a positive impact on basic rights and freedoms inside Iran. More than two-thirds of respondents said that lifting sanctions would improve ordinary Iranians' economic position, allowing people to focus more on improving civil liberties. 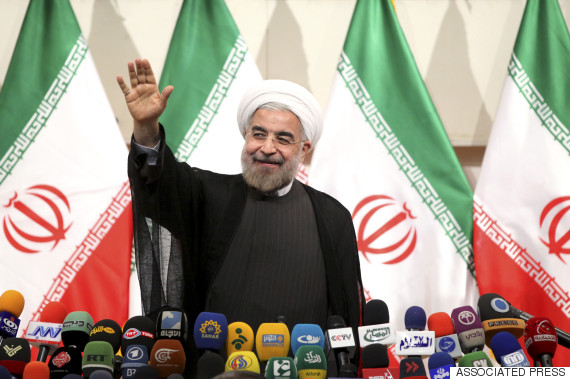 Iranian President-elect Hassan Rouhani waves to media at the start of a press conference in Tehran, Iran in June 2013. (AP Photo/Ebrahim Noroozi)

Any hope for democratic changes in Iran is deeply and directly related to economic improvements after the end of sanctions. Rouhani's government finds itself between two opposing interest groups. On one hand, it will have to manage the expectations of young Iranians by reopening the Iranian market to European businesses and creating new jobs, or face huge disappointment. According to Middle East economics journal Meed, as sanctions are gradually lifted, Iran could double its gross domestic product (which was $427 billion in 2014) by 2030 and attract almost $350 billion in foreign direct investment in the next five years.

On the other hand, Rouhani and his cabinet find themselves under daily pressure from Iranian ultra-conservatives, who are trying to uphold the ideals of the Iranian revolution and continue to have the last word in politics. But conservatives need a strong showing in the upcoming parliamentary elections next year. This is followed by another election, for the Assembly of Experts, which has the power to select the supreme leader and supervise his activities.

For Iranian civil society, therefore, what counts now is to find a way out of economic difficulties in order to reorganize its forces and enter an era of post-ideological politics. That is why, for Iranian civil society, the nuclear agreement marks a new era in politics. We need to bear in mind that this new era is not only fragile, but also marked by the limits of an Iranian civil society that is trying to empower itself by creating a competing and parallel political culture of its own. The fact remains that the majority of young Iranians have moved away from fundamentalist politics and utopian rationalities and embraced pluralism, dialogue with the West and understanding of modern culture and Iranian heritage.

It is certain that the deal will help Iran become more open and more transparent.

It goes without saying that the nuclear deal remains a handsome reward for diplomacy. Though it is too early to say what the prospects and consequences of such a deal will be for the future of Iran's domestic politics, one can say with certainty that it marks one of the great turning points in Iranian contemporary history. Opening up Iranian society to new economic investments and the growth of the private sector will be especially positive in building civic frameworks, dialogue with the state, legal capacities and encouraging societal movements.

Thus, the nuclear deal, in terms of dialogue among Iranian and American governments, offers an optimistic outlook. It is certain that the deal will create a new legitimacy for the Islamic regime in Iran, while making Iran the next hegemonic power of the Middle East. But it will also help the country to become more open, transparent and susceptible to international pressure on issues like the death penalty and the imprisonment of civic actors in Iran.

Although Iran has a long road ahead to achieve true good governance, civil society is poised to take a major role in securing a peaceful and nonviolent change for Iranian politics. But to end its revolution, Iran needs economic and political cooperation with the outside world.