There have been several recent calls from people and organizations concerned about global warming to use nuclear electricity generation as part of the solution. This includes The New York Times, the Center for Climate and Energy Solutions (formerly the Pew Center on Global Climate Change), and a group of leading climate scientists, James Hansen, Tom Wigley, Ken Caldeira, and Kerry Emanuel.

Don't get me wrong. Global warming is real, it is caused by human emissions of greenhouse gases, it is bad (as described in detail by the new National Climate Assessment), and we have to do something about it. But solar and wind power, combined with increased efficiency and conservation, can do the trick. Elimination of exorbitant government subsidies to the nuclear and fossil fuel industries, and a gradually increasing carbon tax, fee and dividend, or a cap and trade system like the one that worked to tame acid rain, will push us to do the right thing. 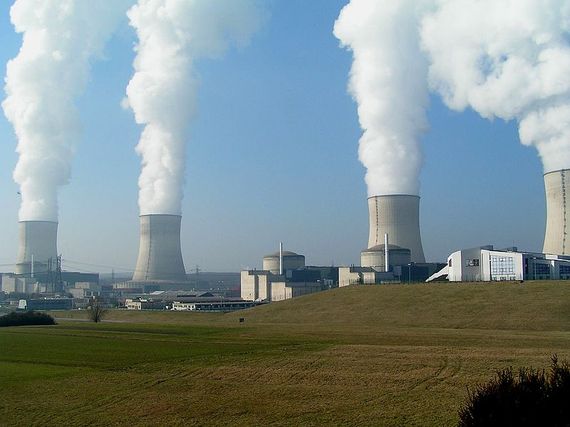 More than 99 percent of the current 437 nuclear power systems in the world use highly enriched uranium to produce heat and boil water, which drives turbines. Plutonium and many other highly radioactive elements are waste products. The benefits of nuclear power include minimal emissions of greenhouse gases that cause global warming, and a fairly reliable continuous source of electricity.

But nuclear power presents many downsides. These include:

Proponents of nuclear power, recognizing these dangers, propose new "safe" future generation technology (which does not now exist), assembly line production of standard designs, and continued operation of existing plants that are already beyond their 40-year design lifetime in the United States. I certainly agree we need research into new nuclear technologies, to see if they are a real potential solution sometime in the future. But solar and wind energy is here now. In the meantime we need a rapid move away from coal and into solar and wind sources of green energy.

Proponents assert that wind and solar are not viable because of cost, but with the plummeting price of solar panels, and the global potential of wind power to provide all the energy needed on the planet, they are wrong. We will need electrical grids that will combine wind and solar over large areas to compensate for local intermittency, along with other backup sources and new electricity storage options. The planet has safer, cheaper options for energy that do not emit greenhouse gases and do not present the same dangers as nuclear power.

Proponents argue that although solar and wind technology is here, it works, and is safe, they see no political path to adoption. But I am optimistic that this problem can be solved. We worry about tipping points in the climate system, whereby with a little more warming, methane (a very strong greenhouse gas) will suddenly start spewing out of the Arctic soils and oceans, or catastrophic melting of ice sheets will start. But there are also tipping points in human behavior. A decade ago, who would have thought that today we would have gay marriage, legalized pot or a black president?

We have free will, and we can fix this problem if we want to.