In March 2011, a devastating earthquake and tsunami set off a partial meltdown at the Fukushima nuclear plant on Japan's coast. A recent study led by European researchers found Fukushima is not alone, as 22 other plants around the world may be similarly susceptible to destructive tsunami waves, with most of them in east and southeast regions of Asia.

The 23 facilities on the list (including Fukushima) house a total of 74 nuclear reactors. Thirteen of the plants are active, while the others are either nearing completion or being expanded to house more reactors. The researchers say East and Southeast Asia are at the greatest risk of a nuclear crisis triggered by a tsunami because of the rise of atomic power stations in the region, especially in China, which houses 27 of the world's 64 nuclear reactors currently under construction.

"The most important fact is that 19 (two of which are in Taiwan) out of the 27 reactors are being built in areas identified as dangerous," state the authors of the study.

Meanwhile, in Japan, seven plants — one of which is currently under construction — are located in zones at risk of a tsunami, and South Korea is now expanding two plants in risk zones, the researchers said.

The study, which appears in a recent issue of the journal Natural Hazards, urges energy officials in these countries to consider how they would deal with the potentially far-reaching consequences of a catastrophe.

"The location of nuclear installations does not only have implications for their host countries but also for the areas which could be affected by radioactive leaks," study researcher Joaquín Rodríguez-Vidal, of the University of Huelva, told SINC, a Spanish news agency. 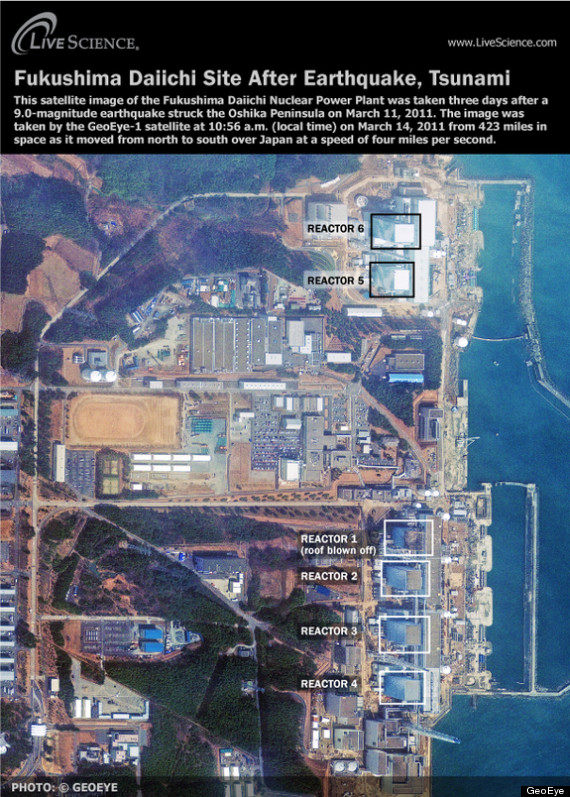 This GeoEye satellite image shows the nuclear reactors (labeled) at the Fukushima Daiichi plant after the earthquake and tsunami hit northeastern Japan.

23 Nuclear Plants In Tsunami Risk Zone Could Be A Threat, Study Finds
Japanese Tsunami-- The Aftermath

1 / 13
In this combination photo, Tayo Kitamura, 40, kneels in the street to caress and talk to the wrapped body of her mother Kuniko Kitamura, 69, after Japanese firemen discovered the dead body in the ruins of her home in Onagawa, Japan, on March 19, 2011, top, and a newly built home sits at the site of the now-cleared but destroyed area on Wednesday, Feb. 22, 2012. (AP Photo/David Guttenfelder)
AP