Get ready to dance.

If you like the excitement of March Madness, you're going to love April. It will begin possibly the busiest four months in arms control history -- packed with a new Nuclear Posture Review, START Treaty, Nuclear Security Summit, and the Review Conference to the Nonproliferation Treaty.

It is an unprecedented nuclear line-up. But before charging onto the court, let's review the game plan. 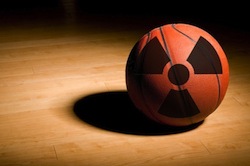 Put Me In, Coach

It has been almost a year since President Obama laid out his policy vision in Prague. There have been some advances, but the outcome of these four events will largely determine if the president can begin to transform American -- and global --nuclear policy. Will this be the game changer he promised, or just an airball?

Obama's Prague agenda offered practical steps towards "the peace and security of a world without nuclear weapons." America, he said, would move away from Cold War thinking, reduce the number and role of nuclear weapons, stop their spread and prevent nuclear terrorism. The administration then began laying the groundwork for these initiatives.

Obama and Russian President Dmitri Medvedev began negotiating the first verifiable arms reduction treaty in two decades. While engaging Iran, Obama also moved to blunt their existing missile threats. Following the advice of the Joint Chiefs, Obama replaced the Bush administration's flawed program with an adaptive missile system that has interceptors across from Iran in the Mediterranean today. In September, he won UN backing for sweeping new commitment to disarmament and nonproliferation. Last month, he introduced an increased nuclear budget the administration says ensures that our nuclear weapons can be maintained without testing and with deep reductions to our 10,000 weapons now stockpiled.

But these are pre-game warm ups.

What the President truly wants is to transform global nuclear policy, not tweak it. The basic idea is that by seriously committing to the policy goal every US president since Harry Truman has espoused--the elimination of nuclear weapons--we can win domestic and global support for near-term steps that make our nation safer. We truly do not yet know whether it is possible to eliminate these weapons. But as former Secretaries of Defense Bill Perry and Frank Carlucci say in the forward to a new study by the Stimson Center, Elements of a Nuclear Disarmament Treaty:

"Within the past few years, the possibility of the total elimination of nuclear weapons has gained greater and more serious attention.... No longer relegated to the fringes of foreign policy discussions, the pros and cons of nuclear elimination are now discussed seriously by government officials, politicians, and national security analysts in all key nations."

To be sure, there is still strong support for the nuclear status quo, those "clinging to nuclear weapons" as Secretary of State Hillary Clinton puts it. But the transformationlists have a deep, deep bench of credentialed security experts and national leaders. The momentum for fundamental change is growing.

The original calls from US statesmen Shultz, Kissinger, Perry, and Nunn have been echoed by 39 former statesmen and stateswomen from nine key nations - Australia, Belgium, France, Germany, Italy, the Netherlands, Norway, Poland, and the United Kingdom. Global Zero and its plan for the verified elimination of all nuclear weapons has the support of an impressive array of national security experts from all across the world - from Queen Noor, to Mohamed ElBaradei, and even Stephen Colbert. In the new film Nuclear Tipping Point, former-Secretary of State Colin Powell gave his support to the initiative to "reduce the number of nuclear weapons and then eliminate them from the face of the Earth."

"For over six decades... governments and private citizens have struggled with the question of how to contain the unique dangers inherent in nuclear weapons... The overriding obstacles are not technical; they are political."

To move the politics, to advance this transformation, Obama must, over the next four months:

Nobody said this was going to be easy. There are some tough players on the other teams. It comes down to who has the most determination, smarts and heart.

Time to put your game face on. (No, seriously, game face.)