Thank you Republican heroes who refuse to vote

for Mr. Trump for love of country. I love you…for real. 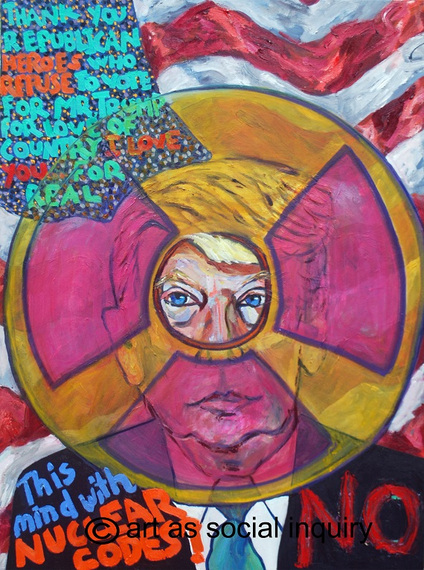 This painting is a thank you to Republican heroes, both public* and regular folk. They are the ones not lying to themselves about the meltdown that is a Trump presidency. They refuse to vote for a candidate who is grossly unqualified and a danger to the country. Love of country over politics. It takes courage and character to walk away from your nominee, and to do the right thing. Thank you for not voting for Trump. I love you for it.

During the first Clinton/Trump debate over 80 million viewers witnessed the sinkhole that is Trump’s mind. For God’s sake, Man, FOCUS, and say something to show us you prepared. Didn’t happen. Trump’s trippy stream-of-consciousness answers to debate questions scared the hell out of me. This isn't a Jack Kerouac novel. It's our lives.

While some Trump supporters relish getting off on misogynistic, racist, xenophobic, and homophobic taunts during Trump rallies like haters drunk on moonshine, the fun stops when Trump’s undisciplined, distracted, rambling mind gets the nuclear codes. A hyped-up Trump at 3:20 AM was exacting revenge on a former Miss Universe by tweeting a link to her sex tape. The thought of adding nuclear codes to a President Trump’s repertoire of adolescent comebacks keeps me up at night.

Politico explains what it means to have the nuclear codes. “With a single phone call, the commander in chief has virtually unlimited power to rain down nuclear weapons on any adversarial regime and country at any time. You might imagine this awesome executive power would be hamstrung with checks and balances, but by law, custom and congressional deference there may be no responsibility where the president has more absolute control.”

Fifty Republican high-ranking national security advisors and experts have signed a letter denouncing Trump-for-President. These officials have served Republican Presidents from Richard Nixon to George W. Bush. They are breaking ranks no matter the consequences. They see a Trump presidency as a national security threat. Their letter concludes, “We are convinced that in the Oval Office, he would be the most reckless President in American history.” They lend their resumes’ gravitas to a #Never Trump movement even if their defection helps Democrats.

Do we all get how big this is?

We are witnessing mutiny led by conscience at the highest level in the G.O.P.

Republicans are helping the enemy, the Democrats, stop Trump from becoming President. Their extraordinary gesture shoves political adversaries onto common ground -- we all love our country equally when it comes to stopping a threat. Some will hold their noses in this clumsy embrace. But all know they must repudiate Trump if they are to put country first.

Every Republican leader, and rank and file voter thinking critically and acting rationally deserve our respect. They are not voting for Trump. The Dallas Morning News editorial sums it up. “Donald Trump is Not A Real Republican.”

The #NeverTrump Republicans are putting love of country over politics. Thank you. This painting is for you with love.

* I agree with President Obama that some Republican leaders and media outlets don’t get credit for disavowing a Trump candidacy when they have been responsible for creating it. “This is in the swamp of crazy that has been fed over and over and over and over again,” the President said. For years, FOX and other outlets have exploited loyal Republican minds with misinformation and half-truths for political gain. In the documentary, The Brainwashing of My Dad, Jen Senko wonders how her dad, who never had a bad thing to say about any race, people or person, came to revile black people, poor people, Hispanics, gays, feminists, and Democrats. The founders of HearYourselfThing.org say they are on a mission “to reclaim America’s brain from media outlets that use fear and misinformation to shut down our ability to think critically and act rationally in our democracy. “

This artist is a Hillary supporter without equivocation. There have been and will be policy disagreements with the Republicans referenced in this piece. But today, they are heroes. Credit where credit is due.