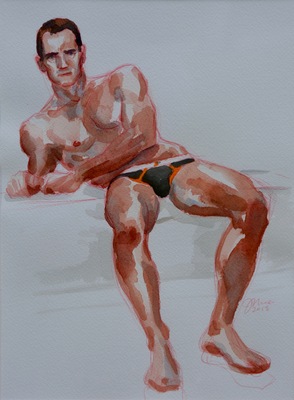 I'm 51 years old and I've never seen either of my parents naked. And I have every hope of extending that streak for another 30 or so years. In fact, I'm slightly put out that they've seen me naked. Someone really should invent some sort of privacy screen for babies who don't like the idea of being nude in front of their parents. Maybe it's just my paranoia, but I feel like once someone has seen you in all your glory, they've got something on you. He has the most interesting mole right on his...

I admit that my aversion to parental nudity is a bit ironic, since I can't seem to go a day without my son Jackson parading around naked in front of me and my husband. Or bursting into the bathroom when I'm in the shower to yell at me, because I forgot to buy him hairspray or something equally important that obviously couldn't wait. In our house, privacy and modesty are like political campaign promises--frequently talked about, but rarely demonstrated.

As gay dads people are forever asking us how our family is different from families that have a mom and a dad. For years we've always insisted that our family is no different than any other family. That's not to say that we aren't unique, we definitely have our quirks. But our differences don't have anything to do with the fact that we are two men raising a son. Or at least that's what I've always believed. Lately I've been wondering if growing up in a house of men has encouraged Jackson to let his freak flag fly.

So I did what any reasonable parent would do; I turned to Facebook for answers. As it turns out, I'm not the only parent with a budding nudist on their hands. Here are a couple of my favorite responses:

That's a pretty diverse group represented in those Facebook comments, which is kind of a relief. I would hate to think my whole gay dads are just dads speech has been a lie all these years. This leads me to believe that perhaps Jackson, at 14, is a lot more comfortable in his skin than I am in mine. I don't know why this is surprising to me. My parents haven't seen me nude since I discovered the lock on the bathroom door, but my mom had definitely seen my husband naked. More than once. Accidental nudity doesn't faze Ken.

Despite what my Instagram feed might lead you to believe, at 51 I'm still trying to come to terms with my body. And sometimes it's easier to expose yourself to the world than it is to take your shirt off in front of the guy sharing the locker next to you at the gym. I've definitely made progress. I don't use the stalls to pee, or try to put my underwear on under a towel. Anymore. Oddly enough, after swim meets Jackson usually changes out of his swim trunks in a stall and he refuses to even think about switching his jammers for a speedo.

Whether your 51 or 14, gay, straight or otherwise your relationship and comfort level with your body can be a complicated thing. That's one of the reasons I don't give Jackson a hard time about his casual nudity at home--although a pants rule for the main floor isn't a bad idea. I'm secretly thrilled that he has that level of confidence that I never had as a kid. Even if it does mean I have to occasionally throw up a hand-blinder, or remind him to close his bathroom door when his grandma visits. I'm also sure that he will begin to cover up as he gets older. Although it has been just the opposite for me. My nipples never saw the light of day until I was in my twenties and now I'm posing in my underwear at 50. At the rate we're going Jackson may be the one begging me to put some pants on before his friends come over. They say revenge can be so sweet.

Disclaimer: I do not have a mole there, so stop trying to visualize it.

Thanks to John for the Drawing

More:
modestyInstagramParenting Parentsgay dads
Newsletter Sign Up
Raise the kind of person you'd like to know
Subscribe to our parenting newsletter.
Successfully Subscribed!
Realness delivered to your inbox