I challenge all who would call Jennifer Lawrence, Kate Upton, Kirsten Dunst and whomever else's photos got leaked a whore, to show me your phones. Show me your picture stash. Your Snapchat lists. What you look at on Instagram.

Because if you looked on my phone, aside from some cute puppy pics and some pictures of Charleston, you'd find a couple pictures of me tan as hell in a pair of pink lace boy shorts and no top on. A couple of my butt in tiny gray and white-striped bikini bottoms. A few of me laying down on my bed topless. I look pretty good, too.

As for the boys, well. The boys in my life, past and present, can rest assured that their pics are safely removed from my phone's memory (as for my memory... eh. Some things you can't unsee.)

In this day and age of liberal freedoms and self expression, somehow, we are still all shocked to learn that a super model who is dating a professional athlete has naked and sexual pictures. That an academy award-winning actress has a sex drive. That these women (and Justin Verlander, apparently) have private sex lives that probably resemble most of our own, whether we want to admit it or not (except you're not banging Kate Upton, and I'm not banging Verlander. Though my mother did check in to make sure he wasn't one of my few baseball conquests of days past).

This whole slut-shaming and pearl-clutching thing, it's got to stop. At some point we all have to admit out loud what we all already know: that probably 85% of women (and I'm low balling here) have taken some form of "scandalous" photo of themselves and sent it to a guy. Or girl. Or someone they were interested in. That most women have sex and enjoy it and aren't ashamed of it or their bodies and enjoy little reminders of the things they've done (or in my case, how I looked, ha). We're talking boobs and cootches here, not people raping children or murdering kittens.

Guess what, ladies? As I think we all know, we've all got the same parts. They might look a little different -- you could probably fit seven of my boobs into one of Kate Upton's bra cups, for example -- but we've all got the same tools. How we use them, as long as it's safe and by choice, is our own business. You want to take nude pics of your boobs and abs like me? Awesome. Want to take awkward naked prom-pose pictures? Go for it. It's your body and your choice as to what you enjoy doing with it or who you enjoy showing it to. And while these ladies (and Verlander's) privacy was violated, that doesn't give everyone a free pass to assume just because our pictures haven't landed on the web that we're any better or smarter or less slutty than anyone involved. We're just not as interesting.

Find me a woman today under the age of 30 who hasn't taken one nude or semi-nude selfie. Find me a woman who hasn't stood in front of a mirror taking 30 shots to get just that right angle and lighting. And above all, find me a guy who has the balls to say it to my face that the women who send you the pics are the sluts, while you're just the innocent victim, full of morality. Because I'm sure if I put you're name out there, you'll never get a single interesting picture from a girl again. Good job.

Being sexually active and having a private, personal documentation of that activity doesn't make one morally loose or slutty or a whore. It doesn't make a woman (or man) stupid or naive or unintelligent. It doesn't mean they have no respect for themselves and it doesn't mean the person whose privacy was breached should be ashamed or embarrassed. Because at the end of the day, I would bet the limited amount of money I have in my bank account right now that every woman reading this has been there. Shaming women for having an active, healthy sex life that they can have fun with and enjoy does nothing for anyone. What we do for ourselves sexually, emotionally and physically has nothing to do with how good or bad a person we are. Jennifer Lawrence is no less a talented actress because she sent ass pics to someone. Kate Upton, we've seen 97% of her body without clothes on on the cover of a major magazine, what's the difference? Is she suddenly some heathen bound for hell? Justin Verlander is no less a Cy Young winner because we've now all seen his farmer's tan and very pale butt. People will go on living and being exactly who they are when we see them clothed, even though we can now confirm that sometimes (GASP) they aren't clothed.

People have sex. People find new ways of having sex, especially in this day and age. While I understand that personal privacy has been violated and no girl (or guy) really wants a picture of themselves in a graphic, sexual position to be out there for the masses, I just have to say, who cares? Most of us have sex. And most of us have done stuff I'm sure we don't want our mom's knowing about, even if it feels really good or looks really hot or you absolutely love doing it. It's not like the world didn't know Justin Verlander and Kate Upton had sex. Did you guys think he hung out with her and went shopping? These pictures are women being women and if I were any of them, as hard as it might be (especially for Kate Upton, out of all of them in my opinion), I'd hold my head high and say, "Yep, I have sex. I took nude pictures. I have a private life. Congrats on solving that mystery, Sherlock."

These women have done nothing my friends and I (and I assume a large majority of women in the country) do all the time. Have lives. Have bodies. Have sex. Take pictures. Trust people. I am sorry their privacy was violated, but I am not surprised that under their clothes and professional demeanors, they're simply human beings who like to have sex as much as the next person.

Below I've attached one of the numerous pictures I have on my phone at any given time, sans censor bar. If we all do it -- and let's be real, we do -- why are we all so quick to slut-shame? 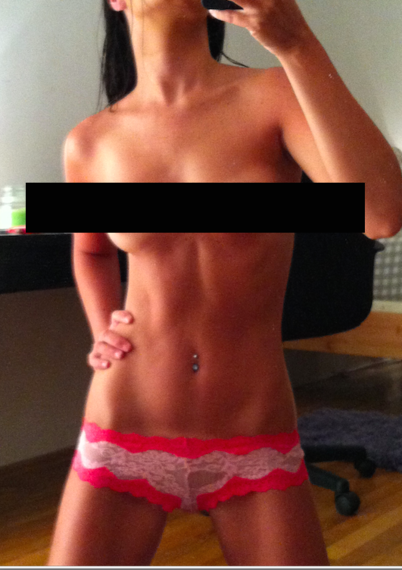