Empty nest parents, be warned: the number of adults aged 25 to 34 who are living with their parents has exploded, according to this rather shocking chart put together by economist Tom Lawler and posted on Calculated Risk.

Earlier this year, a study published in the journal Transitions to Adulthood titled "What's Going on with Young People Today? The Long and Twisting Path to Adulthood" concluded that the economic downturn has caused an entire generation to delay adulthood.As ScienceDaily summarized the study: "In 1969, only about 10 percent of men in their early thirties had wages that were below poverty level. By 2004, the share had more than doubled. Overall, the share of young adults in 2005 living in poverty was higher than the national average."

Calculated Risk is slightly more sunny about the below chart: If the job market picks up, the adults living with their parents may transform into a new class of home buyers.

Check out the chart below and visit Calculated Risk for more information. 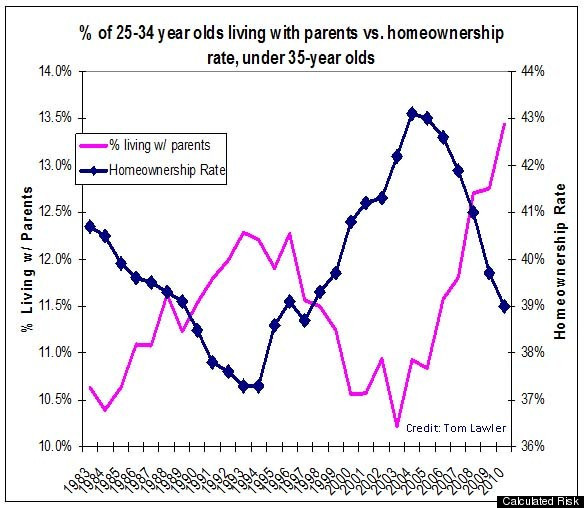