While the increase in jobs over the past month provides hope that the economy's nascent recovery will continue to blossom, one troubling trend in Friday's monthly employment report continues to put a damper on the recovery.

As of last month, more than 6.5 million Americans have been without a job for at least six months, an all-time high, according to Labor Department data. That's more than double the amount this time last year.

Of the more than 15 million unemployed Americans, nearly 44 percent have been without a job for at least six months -- another all-time high.

The negative trend among the long-term unemployed belie the view that Friday's figures were overwhelmingly positive.

Treasury Secretary Timothy Geithner said "the economy is definitely getting stronger" during a Friday interview with Bloomberg Television. Christina Romer, chair of the White House's Council of Economic Advisers, said the employment report is "the most positive jobs report we have had in three years."

But Robert Reich, an economist at the University of California at Berkeley and former Labor Secretary under President Bill Clinton, was much more pessimistic.

Reich wrote on his blog:

"Since the Great Recession began, the economy has lost 8.4 million jobs and failed to create another 2.7 million needed just to keep up with population growth. That means we're more than 11 million in the hole right now. And that hole keeps deepening every month we fail to add at least 150,000 new jobs, again reflecting population growth." 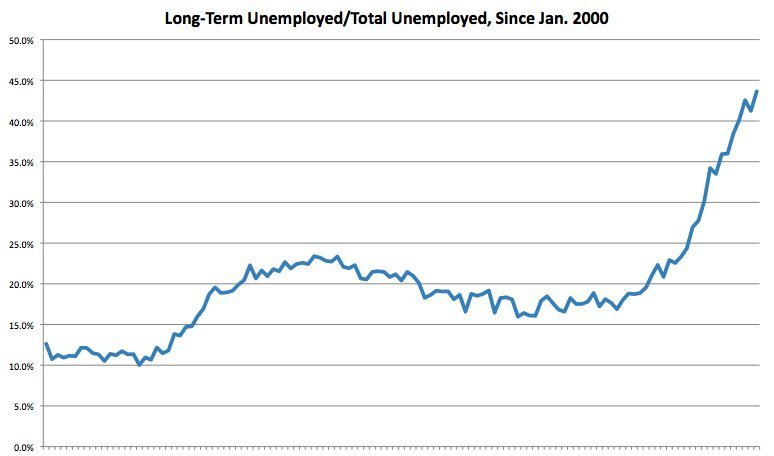 Nigel Gault, chief U.S. economist for IHS Global Insight, said the jobs report was a good sign that better times are coming, yet also cautioned about the growth in the number of long-term unemployed.

The reason why they increased, he said, is due to two factors: lower housing prices and the lack of jobs for lower-skilled workers.

"There's been a very, very deep recession, and there have been heavy job losses in the relatively unskilled parts of the labor force, such as construction," Gault told the Huffington Post. "It's difficult for people who lose those types of jobs to find other jobs, especially if they require particular skills, which they don't have."

In fact, while the unemployment rate for workers over 25 with a college degree decreased from 5 percent to 4.9 percent from February to March, it increased for workers with some college experience (8.0 to 8.2) and for those with just a high school diploma (10.5 to 10.8), according to Labor Department figures.

In a speech this week, Dennis P. Lockhart, president and CEO of the Federal Reserve Bank of Atlanta, also identified housing and a skills mismatch as reasons for low employment growth.

"In simple terms, the skills people have don't match the jobs available. Coming out of this recession there may be a more or less permanent change in the composition of jobs. Skill mismatches require new training, and there is evidence that adult education institutions have responded to this need. For instance, officials at Miami-Dade College in Florida, which is the largest college in the country and a grantor of associate and vocational degrees, told us they have recently seen a strong increase in enrollment, especially of men in their 20s."

Gault said that housing prices are keeping the unemployed from moving in order to search for or take new jobs.

"Another problem is the lack of mobility caused by the housing downturn," he said. "It means that many people may find themselves tied to the home where they are because they may be underwater in their mortgage, and if they find another job elsewhere it may mean that they'd have to walk away from their mortgage. It means they're tied to that house."

Underwater homeowners are those that owe more on their mortgage than their home is worth. Nearly a quarter of all homeowners with a mortgage are currently underwater, according to real estate research firm First American CoreLogic.

"Maybe in the past people might have moved to another part of the country, or moved somewhere even in the same state, to find a new job," Gault said. "It's much more difficult to do that this time if you're tied down to living in that particular house because of the mortgage."

In past jobless spells, the unemployed moved in order to find work, Gault said. "That's one of the adjustment mechanisms for people who have lost their jobs or are out of work for a sustained period," he said.

But now, "one of the adjustment mechanisms is not working properly because people can't move. That's probably made this long-term unemployment problem worse.

"It's certainly worse than in previous recessions," he added. "I think that the labor mobility problem has got a lot to do with it."

"In 2008, the percentage of individuals living in a county or state different than the previous year was the lowest recorded in more than 50 years of data," he said. "People may be reluctant to relocate for a new job if the value of their house has declined. In addition, many who would like to move are underwater in their mortgage or can't sell their homes."

Until housing prices rebound, low-skilled workers re-tool for a new economy, or more jobs are created, the number of long-term unemployed Americans may continue to rise.