Counting the stars in the sky is something we all try to do at some point in our childhood. The ones you can see number in the thousands. With a small telescope there are millions more. So how many stars make up the whole Milky Way? All you have to do is do a Google search on this topic and you come up with a whole slew of answers from as few as 100 billion to over 1 trillion stars. Why can't astronomers nail this number down to better than a factor of ten? 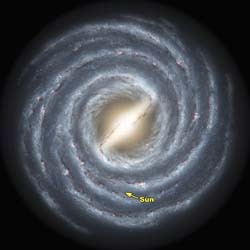 The problem is, astronomers can't directly tally-up the number of stars in a galaxy. Instead they have to use one of three round about methods to sneak up on the answer:

1) They can measure the total light from a galaxy in watts, then divide by the average wattage of a single star.

3) They can 'weigh' a galaxy by calculating its total mass, then divide this number by the average mass of a single star.

These methods all have their problems. In the first method, light can be dimmed in unknown ways in a dusty galaxy and no two stars have exactly the same brightness. In the second method, the density of stars changes as you go from the farthest limits of the galaxy disk to its brilliant center. Also, the kinds of stars producing most of the light changes dramatically as you go from a spiral arm (young luminous stars) to a galactic nucleus (older dimmer stars). So let's look at the third method which most astronomers like to use, and see what it tells us!

Thanks to Kepler's Third Law and Newton's Law of Gravity, we can easily figure out the total mass of a planet by knowing the orbit period and distance of one of its moons. We can also do this for the mass of our sun once we know the orbit period and distance of any of its 8 planets. For the Milky Way, its mass can be calculated by using the sun's orbit around the nucleus of the Milky Way, by following the motions of gas clouds and stars farther out from the nucleus than our sun, or by using the motions of nearby galaxies. This 'gravitational' method weighs all of the mass inside the orbit of the orbiting body including the masses of things that aren't stars such as gas clouds, black holes and even dark matter!

In 2009, one group of astronomers studied the motions of stars at the outer edge of the Milky Way about 160,000 light years from the center. They found the stars way out there were moving at very high speeds, and so the Milky Way's total mass had to be about 700 billion times our own sun.

In 2012, another group of astronomers at the Space Telescope Science Institute modeled the motion of the nearby galaxy Leo I located 850,000 light years from the Milky Way's center. They found that the mass inside this distance was about 1.6 trillion suns. Other estimates using a dozen nearby galaxies yielded 2.5 trillion solar masses!

Galaxies like the Milky Way contain more than just stars. They contain interstellar gas, gas clouds, black holes, white dwarfs, and apparently trillions of 'rogue planets' stripped from their stars soon after formation. All of these non-stellar objects contribute to the mass of the Milky Way. To get the total mass in a galaxy just in stars, you have to figure out how much is in all the other non-stellar parts and subtract them.

The lion's share of the mass of the Milky Way appears to be matter of unknown form, which interacts by its gravitational force but is invisible to light. Astronomers call this stuff 'dark matter', though it may not be matter at all. At the scale of the universe, about 23 percent of the stuff that gravitates in the universe is dark matter.

Detailed studies suggest that our own Milky Way has a dark matter halo that is spread out pretty smoothly to a distance of over 400 thousand light years from the center of the Milky Way. The models also seem to show that a whopping 90 percent of the Milky Way's mass is in dark matter, not easy-to-see stars or gas clouds!

Once you know the total mass of the stars in the Milky Way, the last step is to divide this by the average mass of a single star. This is where most estimates run into problems.

If the Milky Way has a total mass of 2.5 trillion solar masses and 10 percent of this total is in stars, then we have about 1 trillion individual stars!

Many online sources mix up the Milky Way mass with the number of equivalent stars like the sun, and get estimates near 200 billion assuming all stars are like our sun and there is no dark matter. So sometimes a simple-sounding question can have many answers depending on what you assume in the calculations. For myself as an astronomer, I usually use a round number like 'one trillion stars' for the Milky Way.

It's easy to remember, and pretty darned impressive don't you think?