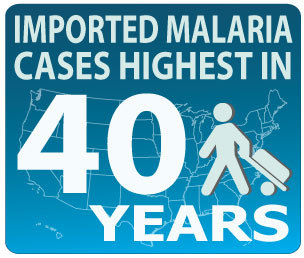 Progress can be dangerous.

Thanks to malaria elimination efforts in United States in the 1940s, most people in the U. S. today have never had any direct contact with the disease and most doctors have never seen a case. That success means it's easy to have a relaxed attitude about protecting ourselves.

We're now seeing the result of that relaxed attitude -- the highest number of malaria cases in the United States in the past 40 years.

That's the conclusion of our recent analysis that finds there were 1,925 malaria cases reported in the United States in 2011. Sadly, the number also includes five deaths.

This contrasts sharply with the great progress made in reducing the number of malaria death globally.

Between 2000 and 2010, malaria mortality rates fell by 26 percent around the world. According to the latest World Health Organization estimates, there were about 219 million cases of malaria in 2010 and an estimated 660,000 deaths.

The WHO credits a scale-up of intervention efforts such as bed nets, spraying and the use of rapid diagnostic tests to quickly find and treat those infected with malaria for preventing an estimated 1.1 million deaths from 2000 to 2010.

Almost all the cases reported in the U.S. in 2011 were acquired overseas. Most cases originated in somewhere in Africa, although India was the individual country where the most cases were acquired.

It's another example of our interconnected world. Diseases like malaria are just a plane ride away.

Most of those cases and deaths could have been prevented. People traveling to malaria-prone areas can protect themselves by taking steps such as taking antimalarial drugs, using insect repellent, sleeping under insecticide-treated bed-nets, and wearing protective clothing.

The lesson is both clear and simple. Think ahead and protect yourself.

We can help. Our webpages have information for travelers about malaria prevention measures and detailed information on countries of concern.

Clinicians can consult the CDC Guidelines for Treatment of Malaria and contact CDC's malaria hotline, 770-488-7788 or toll-free at 855-856-4713, for case management advice as needed.

Our progress against malaria is impressive. But vigilance remains a critical ingredient to protect the health of all people.