Whether it's determining the number of ships on the horizon or the number of cookies in a jar, the human brain has a "map" for perceiving numbers, new research shows.

Topographical maps of the human brain are known to exist for the primary senses, such as sight, hearing and touch, but this is the first time such a map has been found for numerosity, or number sense. The map's layout allows for the most efficient communication among neurons doing similar tasks.

Studies in monkeys have shown that certain neurons in the parietal cortex, located at the back of the brain beneath the crown of the hair, became active when the animals viewed a specific number of items. These studies did not find a map for numerosity, though scientists have long suspected one exists. [The Top 10 Mysteries of the Mind] 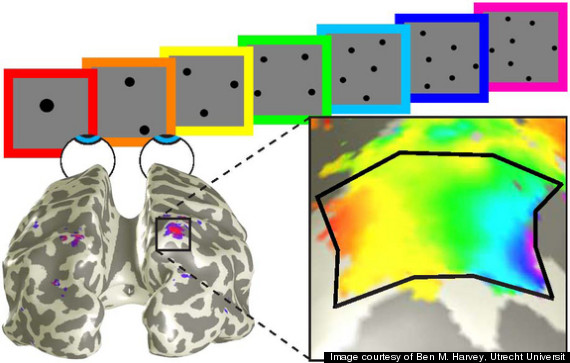 "Scientists have suspected an ordered mapping of numbers for a long time," said Andreas Nieder, a neurobiologist at the University of Tübingen in Germany, who was not involved in the study. "Many laboratories have been investigating this idea intensively. Finally, Harvey et al. succeeded in convincingly demonstrating a map of numerical quantity in the human brain," he added, referring to researcher Ben Harvey, a neuroscientist at Utrecht University in the Netherlands.

Dots on the mind

The researchers used an advanced imaging method known as high-field fMRI, which allowed them to see fine-scale details of brain activity. They analyzed the neural responses using techniques similar to those used to study the parts of the brain responsible for vision.

It's as if the brain was acting as an abacus. "In an abacus, you map number onto space," Harvey told LiveScience. [5 Seriously Mind-Boggling Math Facts]

The findings, detailed online today (Sept. 5) in the journal Science, suggest that higher cognitive functions might rely on the same organization principles as sensory systems do. For instance, in face recognition — which is much more complicated than number sense — objects that look similar might be grouped together in the brain, Harvey said.

In these topographical maps, a larger brain area was dedicated to perceiving smaller numbers than to larger ones, in line with previous findings that number sense becomes less precise as the quantity of items increases.

Importantly, numerosity is different from mathematical ability or symbolism. Numerosity only refers to numerical amount.

People vary somewhat in their ability to distinguish numerosity, Harvey said. At the extreme, you have savants — individuals, many of who have autism or a similar disorder, who possess extraordinary abilities in math, art or other areas. Some savants can look at a pile of pick-up sticks, for example, and instantly know how many there are.