On July 25th, the Caramoor Festival presented the second and final of its Bel Canto at Caramoor operas for the 2015 season, Francis Poulenc's 1956 opera and love letter to the Catholic Church, Dialogues des Carmelites. The opera, performed like a play set to music without formal arias or ensembles, tells the story of the Martyrs of Compiègne, a convent of Carmelite nuns executed during the French Revolution's Reign of Terror. The opera may not seem like a natural choice for bel-canto at Caramoor, but conductor Will Crutchfield's nuanced performance made a case for this opera as a vehicle for great voices in addition to great drama. More information about the presentation of Dialogues des Carmelites at Caramoor can be found here and a review of its first opera of the season, La Favorite, can be found here. 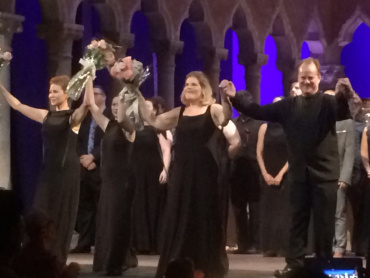 The opera focuses most on Blanche, a timid society girl who enters the Carmelite Convent as an escape from the dangers of the French Revolution. While Blanche is technically the leading lady, Blanche is not the most important character in the opera per se. She is just the catalyst through whom the drama is viewed. In this way, a good performance of Carmelites doesn't necessarily require an outstanding Blanche. A great Blanche, though, is what usually puts a performance over the edge. Jennifer Check was a perfectly good Blanche, working within the role's limits. Her voice is soft grained and resonant, but she built and even more satisfying emotional arc with a character that often comes off as a pansy.

Jennifer Larmore, a Bel Canto at Caramoor veteran, provided a well sung, authoritarian Mere Marie. Her secure singing was complemented by her sensitive yet commanding stage presence. As Constance, the cheerfulest of the nuns, Alisa Jordheim didn't always emphasize the text in Poulenc's verbose, detailed libretto and her voice sometimes struggled with filling the Venetian Theater. Fortunately, her stage presence ironed out any kinks in characterization.

At the end of the first act, the prioress of the convent dies in a scene perfect for a powerhouse, experienced singer. Deborah Polaski is both of those things and delivered solid vocalism and a refreshing sense of refinement to the proceedings as the prioress. As the replacement Prioress, Hei-Kyung Hong brought her signature beautiful, refined, balanced vocalism, and a quiet dignity to the character of Madame Lidoine. 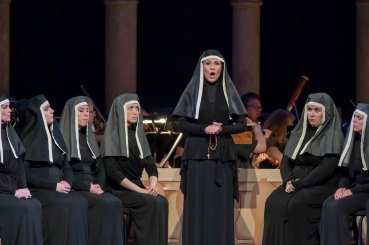 Daniel Mobbs's short appearance as the Marquis de la Force was a highlight as was Noah Baetge as his son, the Chevalier de la Force. The duet between the Chevalier and his sister, Blanche, cut right to the heart of the opera's themes of solitude and fear and paired it with well-sung music. Scott Brunscheen brought a pinging tenor and appreciated stability to the part of the Chaplain. Amongst other highlights were Vanessa Cariddi as Mother Jeanne and Kevin Wetzel as Javelinot.

Will Crutchfield led a resplendent Orchestra of St. Luke's in a swift, nuanced reading of Poulenc's score. The affection for the piece was evident, and an opera that can sometimes feel boring and tedious never sagged. Also strong, as usual, was the Caramoor Festival Chorus.

Instead of the typical semi-staged format of the operas at Caramoor, this performance was staged by Victoria Crutchfield who, in addition to creating some striking stage pictures, was able to effectively communicate the smallness of this convent against the large, looming Reign of Terror with only a few props and virtually no set.

Find out more information about Bel Canto at Caramoor here.