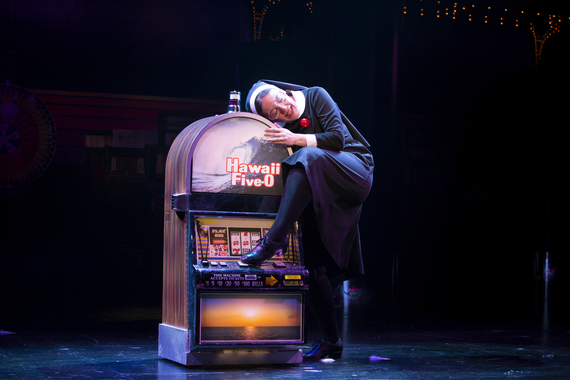 On an evening back in 2013, I sat down with my best friend to see a show at St. Luke's Theatre called Disaster!. I had no knowledge of the show beforehand - I had not gotten the tickets and when I'm not reviewing I often like to remain purposefully in the dark if I'm not familiar with a play, as it's somewhat rare that I get to be totally surprised. I walked out of the theatre that night after having laughed so hard I cried. I was particularly blown away by the character of Sister Mary Downy, a nun with a powerhouse voice and brilliant comic timing, played by Jennifer Simard.

So it is that I responded immediately when I saw that Disaster! was making the transfer to Broadway. I couldn't wait to see the show again, especially with the impressive cast of musical theatre veterans that populated the Broadway cast. As excited as I was to see Roger Bart and Adam Pascal back on stage, I was equally thrilled to see that Simard and Seth Rudetsky, who co-wrote the show with Jack Plotnick, would reprise their roles from 2013. It is therefore a very big honor for me to have had the opportunity to talk to Simard about Disaster! and her experience on Broadway.

A trip to the historic Palace Theatre with her parents and brothers in Manchester, New Hampshire marked the moment Simard knew she wanted to be on stage. After cutting her teeth in New England and working her way up in New York City's theatre scene, this talented character actress now finds herself originating a Broadway role for the first time. A few days ago, I got to ask Simard about her current role and what led up to it.

Bess Rowen: You were a standout back in 2013 when Disaster! was at St. Luke's and now you're stealing the show on Broadway; is Mary Downy as fun to play as she is to watch?

Jennifer Simard: Oh, absolutely. I think it's a good fit, ultimately, for what I do. You know, she has a lot of darkness in her, and my favorite thing about her - and people in general - are the things we find least lovable about ourselves, the dark, nougatey, gooey center. And Mary Downy is one of those people that I think you come across in life and you look at them and say, "wow, what happened to them?" Because she does have some sort of undiagnosed social disorder, a personality disorder, and it's really fun to find those colors every night; and I keep finding things. I am so lucky to work with such experts on stage, because they've actually informed her even more than I imagined, they've helped find new things about her. So it's definitely a team effort.

BR: That's so great. I was going to ask you actually, the show just looks like so much fun to do. I was wondering if you have any particular stories about working with this team - whether that be what you just said, expanding on if there's some sort of new aspect of the character you've found out about, or if there are just hijinks happening during rehearsal or some fun story?

JS: Oh, how funny. Well, as far as hijinks go...I might ask my cast, like a yearbook, "who's most this?" "who's most that?" and as far as who's the funniest, I think most of us would agree that Roger Bart has us in stitches. Backstage and on stage. But backstage, I look forward to seeing Roger every day, because he makes me laugh every single day. And I think Adam Pascal said that as well. He just keeps us rolling, and it's good for morale, because he's just funny, he's just innately funny!

So as far as hijinks, I can't think of any specifics off of the top of my head...although I've been doing a vlog for broadway.com and I did a whole episode about what are our most irrational fears. And Roger has a fear of balloons...because of the surprising popping noises that they an make. And one day I was about to throw away my balloons that I had gotten from the ladies ensemble and I thought, "oh, wait a minute! I'm going to prank Roger, I'm going to tie them to his chair!" And he was a great sport about it. So, we honestly do have a lot of fun backstage. This cast loves each other; there's no drama, we're just a really happy bunch.

BR: It's really clear too. That's very immediately obvious on stage. I mean the show is very funny as written, but also you have a really great cast at the moment, but that makes it even more fun. [Reference to a particularly brilliant aspect of Bart's performance that I would like to keep a surprise.]

JS: Oh, yeah, absolutely! You know, I have to say that I think Roger has one of the toughest jobs of the show, because it's very difficult to make a villain lovable. And gosh darn it, he succeeds!

BR: He does, yeah, totally! I'm really glad you all like each other. That makes me like the show even more.

JS: Oh yes! You know, everyone has their main scene partners. [...] I do most of my scene work with Faith Prince - the wonderful, the incredible, the genius that is Faith Prince - and the amazingly talented, star, diva, Broadway debut, Lacretta Nicole. And I am so lucky to have them, they make me better every day.

BR: You've sort of already touched on this, but what's your favorite thing about this part? Is it being able to play that balance of that darkness and the comedy?

JS: My favorite part...yes, I think you just hit the nail on the head. It's that, and it's the fact that I get to sing the way I love to sing, but because of, I think, because of the way I look, I never get the opportunity to. I never get to sing high, scream, belt rock 'n' roll. I love, love, love my Led Zepplin and my Aerosmith, and little old 5' 2" me gets to release my inner Steven Tyler! You know, I don't picture many opportunities in my life to feel like a rock star, so I get to sing that way. So that is an absolute joy for me. Just because of my type, I don't get the chances very much. So that's another guilty pleasure.

BR: [...] This isn't the first time you've gotten to play a singing nun on Broadway. You were saying about your particular type, so what do you think it is that keeps bringing you to the singing sisters?

JS: Well, it's funny you should say that. Back in New England, I did Nunsense, back in Boston in the early '90s. In fact, I was doing Nunsense right when I auditioned for Forbidden Broadway, which is the show that brought me to New York City. So I was playing Sister Mary Amnesia in that show, which was just a joy every day, at the Theatre Lobby in the North End in Boston. And I did it in New Hampshire prior to that. Then, of course, I was honored to be in the ensemble of Sister Act. And in that show you wouldn't have heard me as much, because I was, you know, singing, as you do, blending, in a group, but I got to sing high in that show. But I think, a couple things. One, you know, I was raised Catholic and I know my way around nuns! But I think, more than that, I think it's a good fit for my type, my face, who I am. My friend Madeleine Doherty and I used to joke that if you need a nun, a nurse, a maid, or a fishmonger, we're your gals, give us a call! You know, or a whore. There are just certain archetypes that you always need from a character actress's point of view. You know, it's a stock character, so that's probably why.

JS: Oh, that's an excellent question. I'm going to say, in my heart of hearts, what I want them to know, is that I am so deeply proud of Jack Plotnick and Seth Rudetsky. Because these two people had a dream and an idea - and a lot of people have dreams and ideas -these two actually made it happen. They opened their laptops and they started typing. How many times do we all sit there going, "I have the greatest idea for a cabaret show" and you never do it. Or, you know, insert the dream item here. These two are entrepreneurs. And they're brave! Do you know how brave you have to be to put something out there knowing that someone could come with the gavel and say, "no, overruled!" It's very hard to mount a Broadway show. It's basically a game: let's see how many no's we can get. And these two are just driven and persistent.

And that's what I want people to know about Disaster!. Not only is it a great show. I could give you the standard, stock answer about how the show is. I think it speaks for itself. It was a New York Times Critic's Pick, and those two did it. And any sort of success that I have in the show, is because of them, and that's it. And I'll never be able to repay them, and I love them very much.

BR: I'm so glad you took that in that direction. [...] It's good to know that that feeling is on all sides. I firmly agree with you, and I'm really glad that people get to hear that in your words, not mine. My last interview question is always: is there anything else you want us to know? About the show, about anything?

JS: Great. You know what, I will take that offer. One of the things I loved - you know, I don't make the decisions about how the show's marketed and whatnot - and I was so pleased to see in Playbill, in the list of shows, under Broadway shows, things are listed under "Musical" or "Play", that my show, Disaster!, is listed as "Musical Comedy." And, whoever decided that, I actually got a huge smile on my face, and in the classic good old fashioned, musical comedy world, this is what that is. And I don't know about the rest of you, but comedy, to me, can make you cry. You can have tears running down your face. It's cathartic. And you sometimes, I kid you not, you can have real tears of pain, in a good way - of that release. There's one moment in the show that gets a lot of people, including myself every night. And it's such a surprise. But this show is funny, funny, funny, and I love that it is now in the history books, it's opened on Broadway, and it's a musical comedy, so come and laugh! Because, my God we need to. So that's what I want to say. I was so happy to see it on Playbill. I was like, darn right, musical comedy!

Disaster! is currently playing at the Nederlander Theatre. Buy tickets here to see the wonderful Jennifer Simard and the rest of the very talented cast filled with nuns, puns, and sharks, oh my!