This piece originally appeared in Quail Bell Magazine, a place for real and unreal stories from around the world. 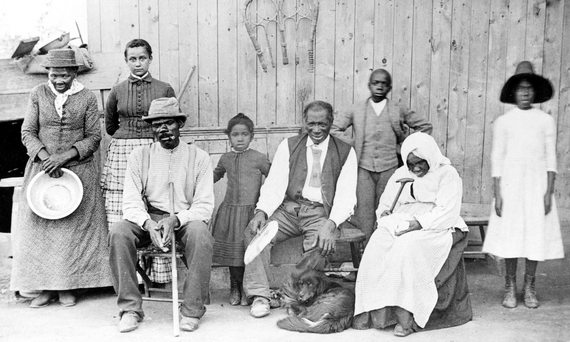 While the other girls wrote about princesses and high school Queen Bees, Emily* wrote about Harriet Tubman. Her first piece in the week-long creative writing workshop began as an academic essay, but ended up being creative non-fiction. The piece, originally titled "Cold, Dark, and Dirty," opened in one of the slave ships of yore, eventually transitioning to the wide, open cotton plantations of Maryland, then onto the trials of slavery, and lastly to our heroine, Harriet Tubman, and her plight. Tubman wasn't just a textbook character; in Emily's piece, Tubman became human. Emily detailed everything from Tubman's potato sack bed to her meals of her master's leftovers to her longing to free her parents from slavery.

Our setting was a church basement in Northwest Washington, D.C. Children from across the metropolitan area come to this parish for lessons in penning fiction, poetry, plays, songs, and graphic novels. They read their finished pieces at local bookstores, enter national competitions, and even have their work published in print and online children's literary journals. The writers range from ages 8 to 18 and all of the instructors are published authors or produced playwrights. The instructors are contractors, teaching one to two workshops a week and spending the rest of their time engrossed in their artistic and professional projects. The children learn from teaching artists in an environment free of judgment and censorship. Unlike in school, there are no prompts, no grades, and no hard deadlines, though the children are placed in workshops by age group, much like in a traditional classroom.

Emily was white and hailed from Chevy Chase, Maryland, one of the richest towns in America, and had just completed third grade. Her background was very similar to that of the other children in my workshop. The difference was her content.

In between working on her Harriet Tubman piece, Emily started a short story set in the Jim Crow South. Her protagonist is a white girl much like herself who decides to go against convention and befriend a black girl. I sat by Emily as she dictated her story, typing furiously to keep up with her fast thoughts. When she took a breath, I asked her questions to encourage her to clarify and elaborate.

At some point while describing the black children's classroom, Emily broke from her narration and stared directly at me.

"Did you know that black people couldn't do the same stuff as white people back then?" She furrowed her little brow, looking sincerely distressed.

I nodded and said, "Yeah, that was a horrible time in American history. And, you know, some people are still mean like that today. There might not be the same laws, but some people are mean, anyway."

Emily dropped her gaze and mumbled, "I know. It's not fair that some people are so mean." Then she told me that that's why she wanted to be a civil rights activist when she grew up. I told her that was one of the best jobs I could imagine.

Later on in the week, Emily wanted to work on an essay about how she first learned about Martin Luther King, Jr. in kindergarden, which seemed in line with everything she had written thus far. But her next idea surprised me:

"I want to write about how I got my puppy."

"OK, sure." It was certainly a more typical piece for someone her age.

Then her little face broke out into a grin. "We named him Lincoln, you know, after Abraham Lincoln. My dad wanted to call him Gandhi, but my brother and I liked Lincoln better."

*Name has been changed for the sake of privacy.