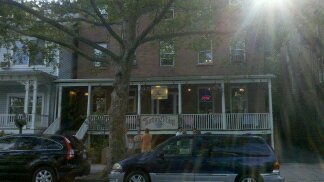 Twenty-six miles from New York City in the charming little village of Piermont, NY., is the home of the Turning Point cafe and restaurant. The town picturesquely sits at the edge of a wide section of the Hudson river and in the shadow of the Tappan Zee Bridge in Rockland County, New York. Owner John McEvoy, has a penchant for blues, folk rock and "shit kicking" music and he has been bringing national and local acts to this area for the last 35 years. For the last three seasons McEvoy has been collaborating with jazz saxophonist and promoter John Richmond to bring top-notch jazz to this intimate music venue, mostly on Monday and Sunday nights.

This past Sunday, I made my way across the bridge to see the trio of drummer Adam Nussbaum, bassist Jay Anderson and electric guitarist Oz Noy perform. Together with tenor saxophonist Seamus Blake, they make up the group BANN (an acronyn for their last names Blake, Anderson, Nussbaum and Noy.). I recently reviewed their most recent offering As You Like, recorded at Anderson's Mountain Rest Studio in nearby New Paltz, NY and thought it was a top-notch effort. (check out my review by clicking here).

I have seen drummer Adam Nussbaum perform before with guitarist John Abercrombie, with whom he regularly works. He is a drummer's drummer who always seems to have a coterie of other fellow players who come out to see him perform. He is a muscular, animated drummer with a firm attack and a keen sense of time. He is deft with brushes and uses his cymbals tastefully. Nussbaum is originally from Norwalk, CT and has worked with John Scofield, Dave Liebman and James Moody to name a few.

Jay Anderson is the consummate journeyman bassist. His resume includes stints with Maria Schneider's award wining "Sky Blue" orchestra, singer/songwriter Michael Franks, the late great saxophonist Michael Brecker and Crusaders pianist Joe Sample as well as being a first call sideman for many other musicians. He can keep impeccable time or produce poignant solos with his facile technique.

Israeli born guitarist Oz Noy is the youngster in the group and the wild card in the deck. His playing is an odd amalgam of jazz, rock, funk and blues. His slant on the music always comes from a contemporary point of view. He crosses between genres with ease. He is an exciting player who doesn't play conventionally. His excursions can be surprisingly brilliant or conversely leave you and his fellow players scratching their heads. Besides working with Adam and Jay in BANN, he has played with super drummers Dave Wekl, Vinnie Colaiuta and Anton Fig along with bassists Will Lee and James Genus in his own power trios.

The group started their set at the Turning Point with an unusual take on the Jerome Kern classic
"All the Things You Are," one my favorite cuts from their recent album. Noy uses an array of electronic devices to supplement his guitar sound and he modulated through the changes as Nussbaum used subtle brush strokes and soft traps with Anderson gently loping on his bass. The result was an old standard that took on a new and contemporary sound.

The group included the Thelonious Monk's tune "Evidence" as a starting point for its exploration into staccato syncopation. The trio was able to negotiate the jagged starts and stops of the tune with a loose precision as Noy led the way and Anderson and Nussbaum followed the chicane of changes in joyful tandem. You could see these guys were having some fun.

Jay Anderson's decidedly western sounding "At Sundown," also from the latest album, is a classic piece of Americana inspired music. Here, Noy skillfully employs a glass slide to create the sound reminiscent of a pedal steel guitar. Using his brushes once again, Nussbaum animatedly hushes his cymbals at precise breaks in the music to great effect. Anderson's bass is warm and inviting, as Noy's guitar sounds like it is taking a page from the Bill Frisell play book.

Noy's "Hot Peas and Butter" found the guitarist getting into some adventurous improvisation with a line from Jimi Hendix's "Third Stone from the Sun" figuring prominently during part of his solo. The band seemed a bit afloat on this one.

The group broke for a brief intermission and came back with a crowd pleasing Nussbaum blues titled "Sherwood Baby," with Noy and Anderson both playing soulful solos.

Almost immediately after this blues, Noy started to noodle on a lick from the melody "If I Only Had A Brain" from the musical the Wizard of Oz. His angular approach was immediately picked up on by his fellow band mates to the delight of the crowd. I am not sure if this was a part of the planned repertoire. It seemed more like a spontaneous response to a fleeting riff and it was fun to watch it develop. This is what makes "live," in the moment music so special.

In what was perhaps my favorite performance of the night, the trio did a wonderful ballad version of John Coltrane's"Giant Steps" at a slow, sauntering pace that allowed for some beautiful solo moments from the three musicians. Anderson was particularly poignant on his bass solo.

The final three tunes were Monk's "Straight No Chaser," Noy's catchy "Minor Shuffle," which could easily become a minor classic and a finale of Miles Davis' "All Blues" with tenor saxophonist John Richmond sitting in for the last song.

It was a great evening of music, and the Turning Point cafe is a wonderful venue that will hopefully continue to provide another needed place for great jazz to be experienced.