From the moment the curtain rises onto a pack of booze-swilling suburbanites engaged in a libidinous promenade, it's clear The Hard Nut is not your ordinary Nutcracker.

To be fair, the Mark Morris Dance Group's modern take on the yuletide ballet -- which returns to the Brooklyn Academy of Music (BAM) through Dec. 19 -- includes many familiar scenes: a young girl receives a nutcracker on Christmas Eve, and her pine-jawed plaything morphs into a brawny, flesh-and-blood hunk before the pair waltzes off into a magical kingdom of snowflakes and sugar plums.

But choreographer Morris has cleverly transplanted the tale from its traditional European setting to a pop-art version of '60s and '70s U.S. suburbia, complete with Formica furniture, G.I. Joe action figures and even a Barbie doll dream house. Though updating such a revered holiday classic is undoubtedly risky (a new 3-D film version, starring Elle Fanning and Nathan Lane, has bombed at the box office), The Hard Nut strips the ballet of much of its saccharine excess, and successfully incorporates much of the darkness found in E.T.A. Hoffmann's 1816 tale on which Pyotr Ilyich Tchaikovsky based his most beloved work.

Morris conceived of The Hard Nut during a three-year stint at the Théâtre de la Monnaie in Brussels in 1991, yet the current production -- which had its NYC premiere at BAM a year later -- has a decidedly American feel, and still looks as lively and energetic as ever. Much has been made of Morris' decision to cast dancers of the opposite gender in many prominent roles (including the heroine's mother), but the end result is far from camp. As both Mrs. Stahlbaum and the Queen, John Heginbotham is completely convincing, while Kraig Patterson has the daunting task of being one of the few cast members to spend the entire show en pointe as the family maid. And many will be surprised to learn that the mischievous tween brother Fritz is played by June Omura, one of the company's original cast members.

Many of the ensemble numbers play further with both gender roles and the story's specifics. In a throwback to the original story, the Prince (David Levanthal) is assumed to be the nephew of the delightfully swishy Drosselmeier (William Smith III), who gifts the toy nutcracker to Marie (Lauren Grant) at the story's onset. Nephew and uncle share a tender embrace in an Act I pas de deux normally reserved for the Nutcracker Prince and Marie; though the intent is to establish the familial connection rather than anything erotic, the male-on-male visual is nonetheless striking. Typically a stoic number in white tutus, "Waltz of the Snowflakes" is transformed into a visual tour-de-force comprising performers of both genders. Wearing midriff-bearing silver costumes and the headdresses resembling soft-serve ice cream, the dancers create the illusion of a blizzard by tossing handfuls of confetti "snowflakes" as they swirl, twirl and leap across the stage.

Morris departs most dramatically from the tried-and-true story for much of Act II, which is normally a series of disconnected dance numbers. Here, he introduces a hideously ugly Princess Pirlipat, for whom Drosselmeier must locate a magical hard nut which, once cracked open, will restore her beauty. This provides a much-needed context for the Chinese, Spanish and Russian dance numbers, each a playful pastiche of national stereotypes. Yet what may seem to be an overly elaborate subplot is, once again, a nod to Hoffmann's original book. After an acrobatically sexy "Waltz of the Flowers," Marie and the Nutcracker Prince finally do get their grand romantic number in Tchaikovsky's best-known composition, "Dance of the Sugar Plum Fairy." Though the heroine normally spends the entirety of the show in a nightgown, she changes into a red dress and doffs her ballet slippers for bare feet as if to emphasize her coming-of-age transition as she lands her man. (Turns out the number's sensuality isn't just artifice, as Grant and Levanthal are a real-life couple).

The production team also deserves kudos for its stripped-down, almost Brechtian staging. Inspired by the horror-comic art of Charles Burns, Adrianne Lobel's largely black-and-white set resembles a massive camera lens, with banners and props occasionally interjecting onto the proscenium. In contrast, the Martin Paklendinaz costumes are bold, splashy and colorful, from the gaudy red-and-green pantsuits for party guests in Act I to burkas in royal blue donned for the "Arabian Dance" in the middle of Act II. And Tchaikovsky's score, robustly conducted by Robert Cole, has never sounded better.

Whether The Hard Nut stands the test of time as well as its better-known George Balanchine predecessor remains to be seen, but judging by the thunderous applause that threatened to appropriately crack the roof of the Howard Gilman Opera House like a walnut, the troupe needn't worry about finding an audience. Though it might not pack in the tourist hordes as the more traditional version does annually at Lincoln Center, The Hard Nut is a delightfully wacky take on a holiday classic that adds depth and humor to the tale while still maintaining much of its original charm.

The Hard Nut plays at the Brooklyn Academy of Music from Dec. 15-19.

Nutcracker , Interrupted: Mark Morris' The Hard Nut Is a Delightfully Zany Take on the Beloved Holiday Ballet
The Hard Nut 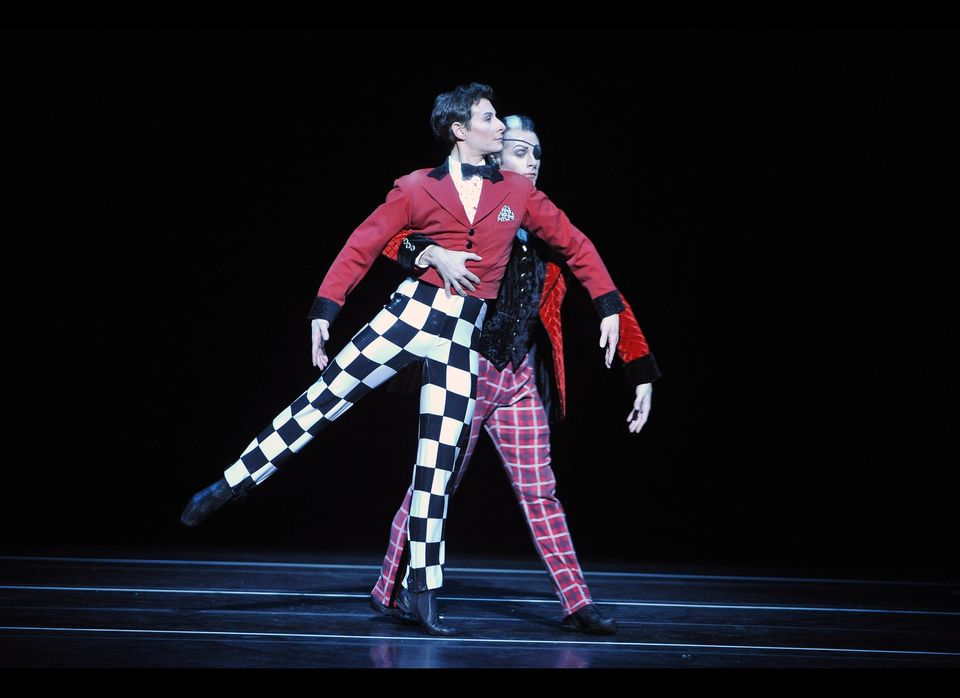