A strong-jawed extinct relative of humans called "Nutcracker Man" might have lived up to its name by munching on tiger nuts — that is, grass bulbs known as tiger nuts still eaten in parts of the world today, researchers say.

The extinct creature, officially called Paranthropus boisei, roamed across East Africa 1.4 million to 2.4 million years ago, living alongside the direct ancestors of humanity. It earned its nickname because of its massive jaw and huge molars.

Because of its powerful jaw, it was long assumed that P. boisei ate nuts, seeds and other hard items. Mysteriously, a recent study of its teeth did not turn up the kind of pitting one would expect from hard meals, suggesting Nutcracker Man actually fed on softer fare. [See Images of Nutcracker Man Fossils]

Damage to the teeth enamel of P. boisei suggested it came into contact with abrasive substances. Recent studies on the makeup of these teeth hinted these ancient relatives of humans largely lived on so-called C4 plants, such as grasses and sedges. However, controversy remains over whether such foods could have been nutritious enough for a large-brained, medium-size hominin. (Hominins include humans and related species after they split from the ancestors of chimpanzees.) 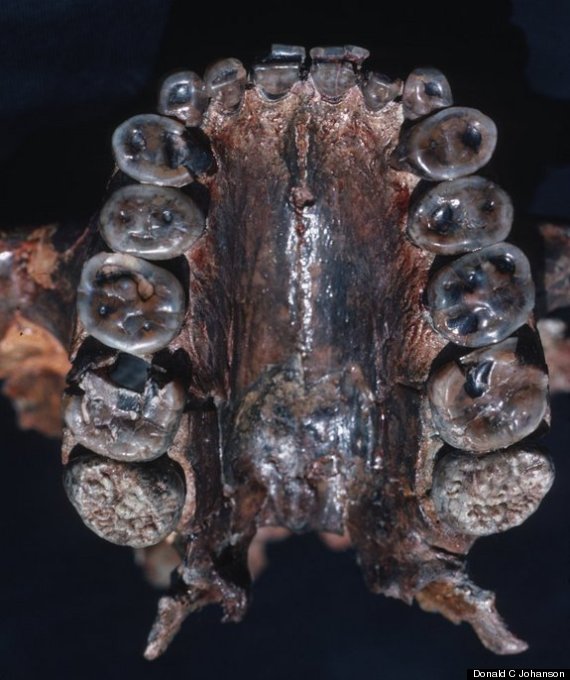 "It bothered me that every time new evidence for P. boisei was presented and celebrated as solving one aspect of its morphology or biology, it contradicted another," said study author Gabriele Macho, a paleoanthropologist at the University of Oxford in England. "There had to be a way that combined all evidence from morphology to biology and environment. After all, P. boisei was a successful species that lived for over a million years. It must have done something right."

To help solve this mystery, Macho investigated modern-day baboons in Amboseli National Park in Kenya, an environment similar to that inhabited by P. boisei. She focused on year-old baboons, for which there was much data on what they ate and the rate they ate it. These young baboons were also ideal for analysis for another reason: since they require more nutrients than adults, they may therefore have diets more comparable to the requirements of a larger-brained hominin than the diet of adult baboons. [Top 10 Mysteries of the First Humans]

"They are crunchy and sweet." Macho said. "I don't know where tiger nuts got their name from — I presume it's from their rugged appearance. It is more commonly known as chufa in Spanish-speaking countries and, when made into a drink, horchata. As a drink it is quite popular in northern Spain today, and in parts of South America."

Macho analyzed past data on how long it took these year-old baboons to dig up enough tiger nuts. From that, she calculated how long P. boisei likely needed to forage in order to collect enough tiger nuts to survive. She estimated P. boisei could have gathered tiger nuts as quickly as an adult baboon, which is at least twice as fast as yearling baboons, due to superior manual dexterity.

Tiger nuts are rich in starches that are abrasive. In order to digest the tiger nuts, P. boisei would need to chew on them for a long time. All this chewing would cause major wear and tear on their jaws and teeth, perhaps explaining why "Nutcracker Man" had such unusual anatomy — features of its jaws and teeth resulted from repetitive chewing, not eating of hard objects.

"The most important, exciting aspect for me is that the diet proposed reconciles all apparent inconsistencies," Macho told LiveScience.

Macho calculated P. boisei could gather enough tiger nuts for 80 percent of its estimated daily calorie intake and all of its protein requirements in two and a half to three hours. This fits comfortably within the foraging time of five to six hours per day typical for large-bodied primates. They likely supplemented their diet with fruits and invertebrates such as grasshoppers and worms.

"Tiger nuts, still sold in health food shops as well as being widely used for grinding down and baking in many countries, would be relatively easy to find," Macho said in a statement. "They also provided a good source of nourishment for a medium-sized hominin with a large brain. This is why these hominins were able to survive for around one million years, because they could successfully forage, even through periods of climatic change."

Machodetailed her findings online today (Jan. 8) in the journal PLOS ONE.