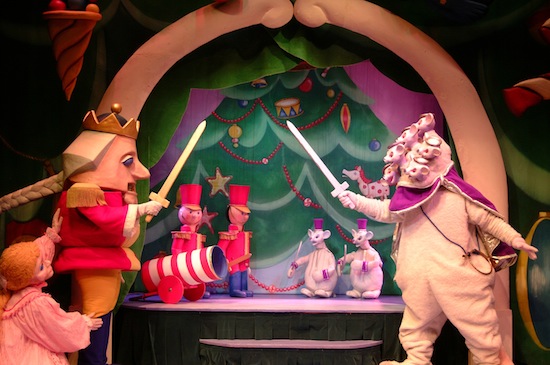 I grew up enchanted with The Nutcracker and have been waiting for my children to be old enough to introduce them to the magical story of Clara-Marie's journey to the land of Sugar Plum Fairies. Thanks to the Puppet Co. at Glen Echo I was able to take two of my children to a Nutcracker production this year. My children, ages 2 and 5, sat through the entire 50-minute production and walked away as in love with the story as I am. When the show ended my son asked if we could see the show again -- his highest praise. I think we have the start of a new holiday tradition. 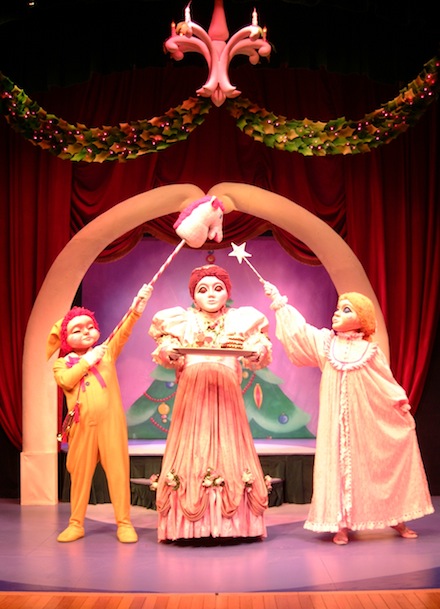 Although The Nutcracker is produced by the Puppet Co., much of the show is performed by live actors with larger-than-life heads. There is no speaking during the show but the actors convey the story very well through movement and props. Of course there are also puppets and Clara-Marie's journey to Sugar Plum Land in this production of The Nutcracker include enactments of Humpty Dumpty and Little Bo Peep. The highlight of the show for my son was a sword battle between a life-sized Nutcracker and the six-headed King Mouse. My daughter enjoyed the extended dance by life-sized flowers and their smaller flower puppets. Both children were delighted by a prancing blue horse and an iridescent, floating genie. My 2-year-old got distracted at times, but after I pointed out something new on stage her interested returned quickly. My 5-year-old remained mesmerized throughout. The actors are all available after the show for pictures and to answer questions. While many of the children were excited to meet the actors, my son seemed disappointed to discover that the characters were "only people wearing costumes." 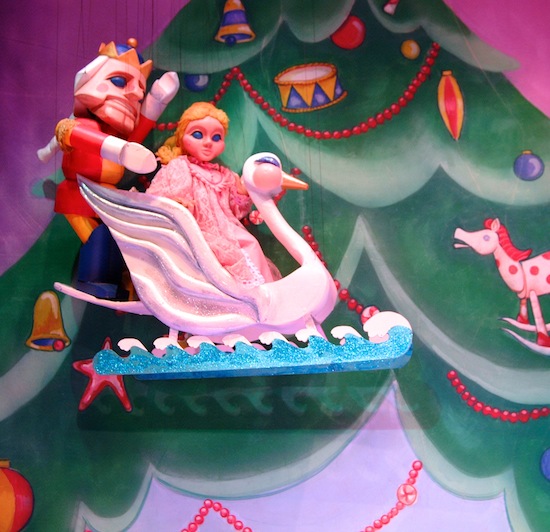 If you go, tickets can be purchased online with no ticketing fees at this website or at the box office. For procrastinators, be aware that ticket sales online end one hour and fifteen minutes before show time. Doors open 15 minutes before the show begins. Seating is unassigned with seating for children on the floor and some benches available for adults in the back. There is limited space available for adults to sit with children on the floor so if you want to sit with your child you should plan on arriving early to be among the first admitted to the theatre. There is plenty of free parking. The Nutcracker runs through December 30.