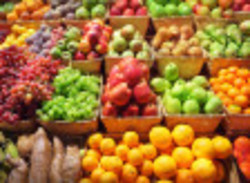 Why is this such a big deal?

First, when it comes to climate change and human-produced emissions, the most frequently discussed areas include transportation, energy use, and fossil fuels.

But, with food choices already contributing significantly to greenhouse gas emissions, and with population growth and demographic changes globally, the proportions and amounts of greenhouse gases emitted from our food system will only increase.

Currently, world population is about 7.4 billion people. Population growth is significantly slowing in developed countries such as our own and in Europe. However, in developing countries, particularly in Africa, the population is expected to double in many of those countries. Not only that, but where people live, is also changing. Our world is urbanizing and as people earn more disposable income, they frequently choose to eat a more animal-heavy diet.

We saw this in China. According to the Food and Agriculture Organization of the United Nations (FAO) Over a 40 year period, starting in the 1970s, as incomes grew, and the population became more urban, per capita meat intake quadrupled. The same report indicates that in Africa, meat intake is expected to increase by 50 percent in the next 15 to 30 years.

So, while renewable energy and greenhouse gas emissions from transportation and fossil fuel use will significantly drop in the next decades, emissions from agriculture, food waste, and animal husbandry, will most certainly increase.

That is why diets and what we eat, needs to be discussed in climate-change talks, and at conservation and sustainability meetings.

We make more than enough food to feed all people on earth. Yet, 42 percent of cereal grains are diverted away from human consumption to feed animals. With a growing world population, raising more animals will not be the solution. The solution, will be eating more plants, eating significantly fewer animal products, and really demonstrating to the world that we in the United States are thought leaders and are just simply leaders, by example.

To lead by example, we need to overhaul our food systems, or dietary recommendations, and simply eat fewer animal products. By showing other countries that we are willing and able to do it, they will follow suit.