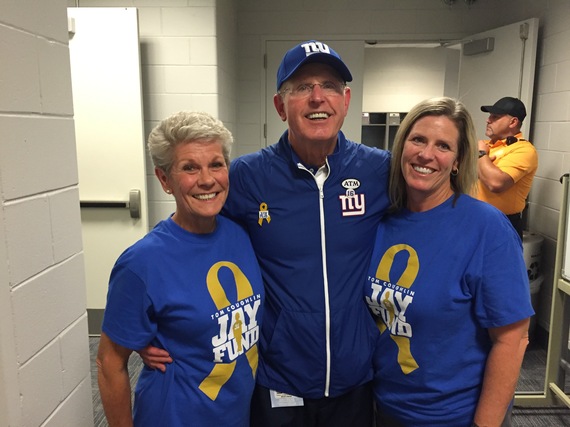 Most parents want to raise a charitable child who is both compassionate and generous, but it can be a tougher mountain to climb than it looks. I've recently come to admire the parenting skills of NY Giants Coach Tom Coughlin and his wife, Judy. Inspired by Jay McGillis, a football player at Boston College who was diagnosed with Leukemia and lost his battle after eight months, the Coughlins started an incredible foundation to help families who are tackling pediatric cancer. The mission of the foundation is admirable, in and of itself, but what made me take notice is how all of his kids seem to take an active role in ensuring that families are receiving the financial, emotional, and practical support that so many parents need when a child is sick with cancer.

I caught up with Coach Coughlin's daughter, Keli, who is the executive director of the Tom Coughlin Jay Fund Foundation, to find out how her parents raised kids who step-up and give back, and what lessons she is passing on to her own children. Keli was busy getting ready for a radiothon to raise money on Giving Tuesday for her dad's foundation, but took a few minutes to share her thoughts.

KH: How did your parents teach you about volunteering and giving back?

KC: I don't recall ever having conversations about it and them saying this is how we do it and this is why we do it. It was more lead by example and do the right thing. So I really think that, as young kids, we watched them help a neighbor, or collect things for the food pantry, or they asked us to collect toys to give to kids, but there wasn't a lot of discussion about what was behind that. But as we grew older, and my parents were inspired by Jay, that's when it became a more formal discussion of this is something we can do and we can do it together.

KH: What made you want you to be a part of your dad's foundation?

KC: I really became passionate about the work of the Jay Fund when I began meeting some of the families. I got involved on a volunteer basis when the Jay Fund was just a golf tournament. The gentleman who was coordinating the tournament said he needed some help. I had just moved to Jacksonville and I really did it because I was free that weekend and didn't know anyone in town. But shortly after that, I had the opportunity to interact with some of the families when we did our first ever ice cream social and we took a group a kids to the Jacksonville Jaguars stadium and gave them the behind the scenes tour. The kids were inspiring, but so were their parents as I started to learn more about what their reality was like. It planted the seed.

KH: You said you lead by example, what ways are you doing this and teaching your kids about giving back?

KC: With my kids I try to be more conscious about talking about things. I know from time to time, we talk about, "Who did you see today who needs a special prayer?" Or at their school they wear uniforms but they sometimes have opportunities to pay a dollar and not wear their uniform and that dollar goes towards some cause. I try to talk about not just, "Yeah! You get to wear jeans and a t-shirt today," but what is this dollar for and what is the reason behind what they are doing. I'm also trying to teach them to care about the world and people and what is happening. I try to tell them about the good things that are going on.

I did cringe the other day. We were playing this game called "What's your favorite?" which is a game we sometimes play, and someone gets to ask the question and we go around the table and answer it. The question from my daughter was, "What's your favorite holiday?" And my seven-year-old said Christmas is her favorite holiday because she gets to get all the stuff she wants. Of course in my mind I was thinking, "No, no, no!" So using an opportunity like that, I try to spin it to say, "Christmas is my favorite, too, because we get to be with our whole family and give gifts to people and show them how meaningful they are in our life."

KH: Who are some people in your life, aside from your mom and dad, who are role models when it comes to service to others and giving back?

KC: I have several. My grandfather was a great example. He didn't grow up having much but he was one of those people who really believed you don't have to have a lot to be generous and would give of his resources or his advice. He lived in a little town and was a self-made man and people would go to him and pick his brain about an idea they had, and sometimes he might even give them a small loan. So, I think he was my first significant role model with regards to generosity, and then also one of our board members who is a good family friend, Ernie Bono. He is a mentor on many levels for me. He is involved in many things, but he really believes in the things he does. From his church to his role with the Tom Coughlin Jay Fund to other organizations he is involved with, Ernie leads by example. He is generous with his money, but he is also generous with why he makes decisions that he makes, and his desire to connect people who can help one another and that's something I really appreciate.

KH: What is one piece of advice you would offer parents to get kids involved in doing service projects and getting them involved in giving back?

KC: I think at a young age, it has to be what a child can relate to or something a child has a personal liking for. You have to know the child, but I think it is a lot easier to inspire generosity from a young age with something that they can relate to that is at their level. If you have a child who like puppies, it can be as simple as having them do a lemonade stand to buy dog food, and then taking them to an animal shelter to deliver their donation so they have that interaction. It makes it tangible. I feel like with young kids, they have to be able to see it, so finding out what they like and what is really important to them is key.


To find out more about the Tom Coughlin Jay Fund Foundation, visit www.tcjayfund.org.

More:
Parents tom coughlinpediatric cancer#GivingTuesday
Newsletter Sign Up
Raise the kind of person you'd like to know
Subscribe to our parenting newsletter.
Successfully Subscribed!
Realness delivered to your inbox