In the page preceding a New York Post cartoon that depicts drafters of the stimulus legislation as a gun-downed chimpanzee, the paper published a large photo of Barack Obama signing that very piece of legislation.

The succession of the story and cartoon creates a rather jarring visualization for some readers. One person who pointed out the layout to the Huffington Post expressed bewilderment that anyone "would think that this is okay." 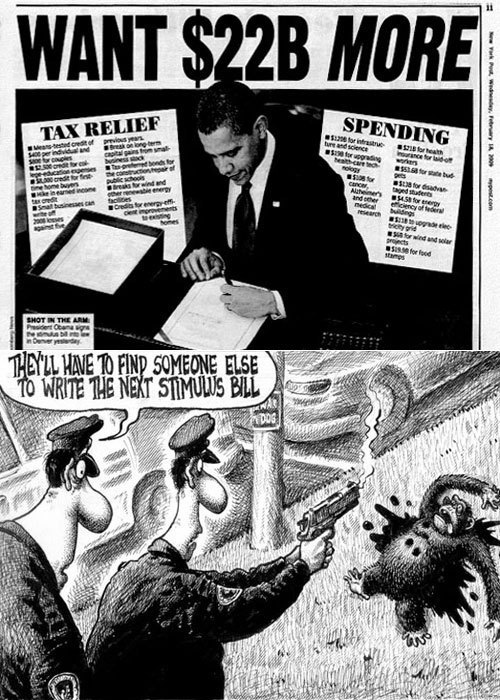 Indeed, reading through the paper one finds a spread image of Barack Obama signing the stimulus gracing the top of Page 11. The accompanying graphics breaks down the contents of the recovery package. The article details the new demands of the auto-industry for more government assistance.

Flipping over to Page 12, there is the now-infamous cartoon with two befuddled looking policeman standing over a shot-dead, crazed chimpanzee. The caption reads: "They'll have to find someone else to write the next stimulus."

The New York Post has defended the publication of the cartoon by Sean Delonas, saying that it "is a clear parody of a current news event, to wit the shooting of a violent chimpanzee in Connecticut. It broadly mocks Washington's efforts to revive the economy."

Inside the paper, however, the mood is much less defiant. An employee of the paper told the Huffington Post that the phones have been ringing incessantly with complaints from readers and the general public. "As they f---ing should be," said the employee.

Meanwhile, the New York Times reports that "many Post staff members were dismayed by the cartoon."