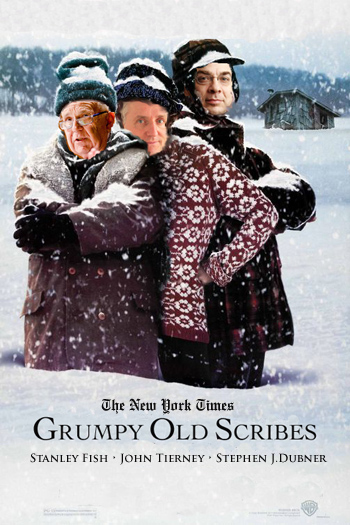 The New York Times giveth, and the New York Times taketh away. On the one hand, Nick Kristof's eloquent plea to treat our farm animals more humanely moved me to tears. On the other hand, I've barely got enough digits to count the noxious "let's not save the planet" columns that John Tierney, Stanley Fish, and Stephen J. Dubner have tossed off in recent weeks like rancid croutons.

John Tierney--the thinking man's John Stossel--delivers his trademark contrarian drivel with 10 Things to Scratch From Your Worry List, in which he gleefully skewers a whole herd of sustainable sacred cows: plastic bags, plastic water bottles, food miles, the Arctic meltdown, and so on. Treehugger tackled half of his half-assed claims, noting that:

Advertisement
This may all be a joke to Tierney, but the truth is some of these issues are areas of real concern and because of this piece, his misinformation will be quoted back to us in comments every time we write about any of these subjects for the next two years, as the word from The authoritative New York Times.

Then Stanley Fish had to weigh in with a weary, Larry David-style kvetch in which his eco-freak wife sabotages his quality of life with recycled toilet paper, fluorescent bulbs, and grass-fed beef, of which he says:

It is of course expensive, but what is worse, it tastes bad. That is, it tastes like real meat, gamy and lean, rather than like the processed, marbled, frozen, supermarket stuff I had grown up on. I'm sure it is a better quality, and that buying it sustains the local community and strikes a blow against agrabusiness, but I just don't like it. And since I hate vegetables, becoming a vegetarian is not an option.

Never mind that he can't spell agribusiness and writes off a whole world of botanical bounty from amaranth to zucchini. I'd dismiss this as a tedious Andy Rooney-ish tirade, but actually, Andy Rooney gave a shockingly spot-on spiel last month about how Agribiz has spoiled our milk; it was a rant worthy of a raw-milk renegade. Fish, by contrast, comes off like just another tired, deflated geezer à la McCain mocking Obama's call to keep our tires inflated. Hey, when Andy Rooney's hipper than you are, maybe it's time to retire.

And then there's Stephen J. Dubner and his Freakonomics blog, where he recently wrote a post entitled Do We Really Need a Few Billion Locavores? in which he recounts his family's disastrous attempt to make homemade orange sherbet:

It took a pretty long time and it didn't taste very good but the worst part was how expensive it was. We spent about $12 on heavy cream, half-and-half, orange juice, and food coloring -- the only ingredient we already had was sugar -- to make a quart of ice cream. For the same price, we could have bought at least a gallon (four times the amount) of much better orange sherbet.

Dubner cites this sad saga as proof that when it comes to food, you're better off leaving it to the professionals. This is just willful incompetence, and so lame that I hardly know where to begin. Homemade ice cream is truly one of the greatest pleasures in life; to claim that you could buy something "much better" at the store is absurd, unless the store in question is some sort of high-end gourmet grocer that sells the finest gelatos.

Besides, half the fun is making up your own flavors--we made a batch of burdock/dandelion/ginger last month that was wonderfully root beer-y; this weekend I'm adapting a Victorian recipe for cucumber/lemon verbena ice cream. And even our plain ol' chocolate is special because we make it with the best bittersweet Callebaut chocolate chips and Valrhona cocoa powder from France (remember, we're retrovores, not locavores.) Try finding that at the store.

I almost felt sorry for Stephen J. Dubner and his lousy overpriced homemade sherbet, until I saw the reader-generated Q & A he subsequently posted with agricultural economist Daniel Sumner. A reader asked:

Advertisement
"How feasible is it that the majority of U.S. food consumption be shifted to a local mode, how long would it take, and would it necessarily be a good thing?"

It is...far from clear that local production is more conserving of energy, has a smaller greenhouse gas footprint, or is otherwise nicer to the environment.
Consider the energy it would take to grow lettuce in greenhouses compared to in the fields of Monterey County. It turns out shipping long distances is cheap in many ways compared to fighting natural comparative advantage to grow crops in inhospitable environments.

Ah yes, the old greenhouse red herring. Locavores don't advocate buying out-of-season lettuce grown in a greenhouse--the whole point of being a locavore is that you base your diet as much as possible on what's in season in your region. As for inhospitable environments, is there a horticultural zone anywhere in America where you can't grow lettuce in the spring or fall?

It's absolutely true that if you're looking to fight climate change by changing your diet, cutting back on your meat consumption is an even more effective strategy than buying local produce. And there's no denying that some crops are grown more efficiently in far-off places. While the idea of food miles sounds deceptively simple, accurately assessing the true carbon footprint of any given item can be extraordinarily complicated.

But food miles are just one aspect of the eat local movement. Agribiz apologists like to focus on them because they can trot out industry-funded studies that purportedly prove that buying local generates more greenhouse gases. Another popular piece of propaganda is the mythical Prius-driving locavore who roams from one farmstand to another in pursuit of the perfect heirloom tomatoes, and then chalks up more miles tooling around for some artisanal cheese and bread (local, of course) to have with them.

Well, sure, this could be worse for the environment than simply heading to the nearest supermarket. But who actually shops this way? Most farmers' markets are located in densely populated areas where folks can walk, bike, or take mass transit to do their shopping.

Besides, the increased demand for local produce is driving even the supermarkets to source their produce closer to home, as Marion Burros reported in Wednesday's Times. A spokesman for the Hannaford Brothers supermarket chain told Burros:

"Our research tells us consumers have about five or six reasons for wanting local: freshness and taste; keeping farmland in the community and having open spaces; a desire to be close to the food source and know where it comes from; support of local farmers and keeping money in the community. Embedded in all of this is concern about food safety. All this creates pretty powerful interest."

While Fish and Dubner are busy lamenting the horrors of local cuisine, Burros and her Dining Out colleague Kim Severson have thankfully provided more favorable accounts of the eat local movement. But even some of that coverage has been a double-edged sword. Severson's recent profile of "lazy locavores" played into the perception that fresh, local fruits and vegetables are a trendy affectation. Witness this quote from Corby Kummer:

"The highest form of luxury is now growing it yourself or paying other people to grow it for you...This has become fashion."

Just ask the Hamptons socialite whose husband, a private equity fund manager, used to eat "a lot of expensive imported food with little thought about where it came from." She gives Severson the perfect annoying analogy:

"It's like the first time you start drinking good red wine and you realize what you were drinking was so bad you can't go back to it...It's that same way with vegetables."

Oh, great, the populist peanut gallery groaned. Just what we needed--another article that frames the local food movement as some kind of elitist fad. More ammunition for the folks who like to promote the notion that a presidential candidate who eats arugula is somehow unfit to lead. Since when is liking leafy greens a character weakness?

But that Hamptons socialite is on to something. With the exception of a few palate-challenged columnists, nearly everybody--rich or poor, urban or rural, liberal or conservative--can taste the difference between a freshly picked, locally grown tomato and the wan, flavorless kind you find at the supermarket. Factor in rising fuel costs, food safety fears, and the yearning to preserve open space, and you've got a movement that's picking up steam--and passengers. Rich folks are hiring edible landscapers, small-scale farmers are thriving , and the rest of us are flocking to greenmarkets and planting our own veggie gardens. A handful of knee-jerk naysayers at the Times can't derail this local train.