A new analysis of data by the Federal Reserve Bank of New York shows that the economy in the country’s largest city is thriving.

On the other hand, New York State is growing moderately and nearby New Jersey is relatively stagnant. 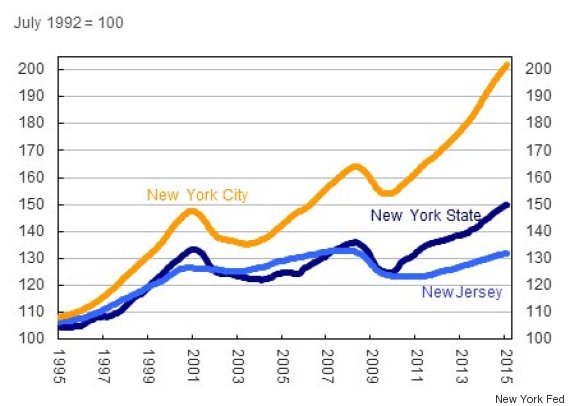 This chart shows an index that tracks the health of the region's economies measured against years.

The data, collected as part of the Fed’s Indexes of Coincident Economic Indicators, details employment numbers, real earnings and the average weekly hours worked in manufacturing.

It’s no secret that the New York City economy has picked up dramatically since its fiscal crisis in 1975, when it nearly declared bankruptcy.

And it has translated into higher living costs.

Rent prices across the five boroughs have skyrocketed. This year, average prices rose 5.9 percent to $3,974 in Manhattan, according to a report by the real estate giant Douglas Elliman. In Brooklyn, the median rent price increased 4.5 percent to $3,201. Queens, in the midst of a fresh wave of gentrification, saw rent prices soar 22.3 percent on average, to $2,929.