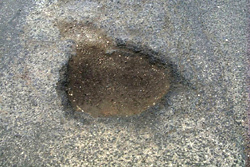 The black craters that have carved out the city streets have been a nuisance for drivers for decades. As you wheel down the avenues they're scattered across the pavement---like land mines---one slip in the wrong direction sends a shudder right through to your wallet, as your two ton vehicle is at the mercy of the unforgiving tarred pock-mark.

Drivers tip toe and sidestep their Michelin's in an urban ballet that if not calculated precisely....can cost the driver hundreds if not thousands in repairs. While others, like cabbies, almost relish the dodging and weaving as if participating in a virtual video game of playing chess with the road. Lulling weary passengers who will be sent over the edge with one more bump. The potholes morph into sink holes in an attempt to swallow their last shred of sanity whole. Their fragile balance of maintaining the urban tightrope of serenity, irritation and angst is held captive behind a plastic partition. But no longer is this rage repressed, as one New Yorker rants to get it off his chest.

Bronx born Anthony Fiorentino has been an Upper East Side resident for over 25 years. "As any driver knows there's always been a problem with potholes in the city. Every time I hit a pothole I bend a rim, or puncture a tire. And it can cost me up to $1,200 in repairs," says Fiorentino. "As well as the emotional distress while avoiding the potholes, I'm at their mercy and have to drive like grandma." While potholes grate his nerves, Fiorentino admits they cause damage to his vehicles twice a year.

Fiorentino has seen many changes and face lifts throughout the city [no pun intended], but remains puzzled as to why the city can't get it right when it comes to potholes. "They just aren't being fixed. With all the money we pay in taxes---where---is all our money going? Shouldn't all the roads be taken care of?" he questions. "Who is responsible....the Department of Highways?" [Actually the NYC DOT who provided the images.]

As a concerned city resident Fiorentino states, "I think we should have better streets. Even though there is a 311 Hotline number [launched in 2003]---reporting is the easy part---but the state still is not doing their job in maintaining the roads." Adding that there should be no extended time frame for repairs. "Once a pothole is reported, it should be repaired in 24 hours." In 2007, 311 announced their 50 millionth call. But, was that something they should proudly celebrate?

When pressed where he thinks the funds allotted for road repairs are going, Fiorentino, like most New Yorkers, is pretty outspoken with his opinion, "In some a-holes pocket. What is the city doing with all the money? They have it somewhere."

In the July 2009 issue of AAA: Car & Travel, "Albany's MTA Bailout---Drivers Pay, Roads Crumble" reports the state's highway and bridge maintenance program is going broke, and drivers are forced to contend with road conditions that steadily deteriorate. Adding 35 percent of New York State's roads are in good condition, and nearly half are rated either "poor" or "mediocre." Ending that the horrendous condition of our roads cost NY drivers an average of $638 more to operate their vehicles in 2007. 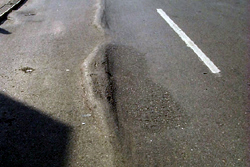 The endless abyss of potholes seems to NOT rattle the cage of the Mayor's mobile---for if they did---they'd surely be fixed---pronto. So while the city is asleep to their eroding gravel---without concern the terrain will begin to mirror the moon. Maybe GM should think about a city version of the moon buggy....as it appears our road workers are lost in space.

NYC Gripes: Where New Yorkers Rant About City Living:
Seething over something in NYC and feel no one's listening? Having a
meltdown over a city issue you're peeved about? Feeling prickly and on the verge of causing havoc? If you live in the city and need to vent---E-mail me with your gripe at NYCGripes@aol.com and let your voice be heard.
---The Sarcastic Activist, R. B. STUART