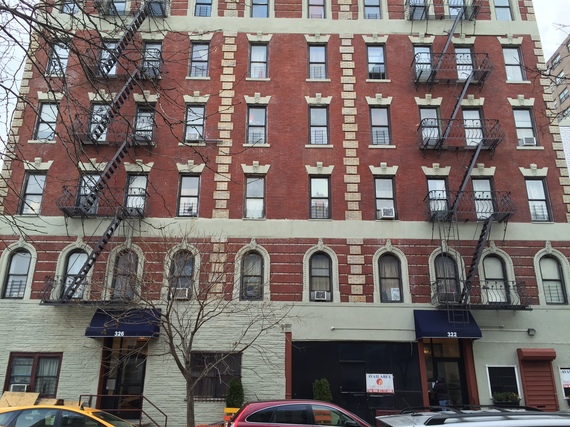 In the wake of New York City's devastating gas explosion and fire in the East Village, which destroyed residential buildings and injured dozens of New Yorkers, there couldn't be a more critical time to take a serious look at New York's housing situation.

In moving to New York City a few months ago, little did I know that my building in East Harlem (which hasn't had gas for months and lacked hot water and heat intermittently throughout the winter) was already the subject of a major lawsuit, the focus of a scathing Daily News story, and under the supervision of a monitor assigned by Governor Andrew Cuomo.

Castellan Real Estate Partners (aka Liberty Place Property Management), backed by Hedge Fund investors, never notified me of any of this when I moved into my East 117th Street apartment. I only became aware after attending a community meeting this past week (see picture below) hosted by a local East Harlem community organization, Movimiento por Justicia del Barrio (Movement for Justice in El Barrio). Attended by the Mayor Bill De Blasio-appointed Commissioner of the New York Department of Housing Preservation and Development (HPD), the apparent gap between community concerns over dignified housing and the city's willingness to address them is serious and substantial.

No stranger to housing issues, having lived in southeast Washington DC where the fight for dignified housing in Anacostia was real and heart-wrenching, I was witnessing a whole new level of frustration. There's little faith left in East Harlem that HPD is "preserving the stability and affordability of our existing housing stock", which is its stated mission. In fact, some of my neighbors feel that HDP is in collusion with the landlords, refusing to crackdown on bad behavior in an effort to gentrify the neighborhood.

They have a point. In NYC, it's working like this: A landlord fails to fix the myriad problems with the building, intimidates and harasses tenants, and makes life unpleasant or unbearable in an effort to usher out lower-income tenants and usher in higher-income tenants. Frustrated tenants either leave on their own or refuse to pay full rent, the latter of which finds them in court with landlords like Castellan. I can attest to this behavior with Castellan/Liberty. After filing innumerable complaints with the landlord and the city, regarding hot water or heat outages or lack of gas over the last four months, I too considered withholding rent but failed to pursue it knowing Castellan's proclivity to take tenants to court (in fact, they boast some of the most tenant-related court cases in the city).

Instead of HPD, it was Movement for Justice in El Barrio who helped me and others, securing reimbursements for tenants who suffered exorbitant electricity rates for the hot plates that supplanted what should've been gas stoves. And it is the same organization that will likely ensure that any gas restoration in Castellan apartments, like my own, will be done safely and avoid the catastrophic occurrence in East Village. The unresponsiveness of the City's 311 service, which I called to report heat, hot water and gas outages, never followed up with an inspector or inspection.

If Mayor De Blasio wants to do something about the "tale of two cities", on which he campaigned, a great start would be to crack down and kick out landlords who refuse to provide dignified housing for New Yorkers. His HPD Commissioner, at the community meeting this week, didn't seem to fully register the utter disbelief and discontent mounting among the many in East Harlem.

A serious approach that would make a real difference in the lives of East Harlem residents, and many other neighborhoods that are equally vulnerable and victim to abusive and corrupt landlords, would follow the recommendations proffered this week by Movement for Justice in El Barrio. These are practical and pragmatic recommendations and, if implemented, can have a positive impact on the lives of many in East Harlem, including myself. Hopefully the Mayor, and his team at HPD, will listen. The list, which was inspiringly and powerfully presented by several staff from the Movement for Justice in El Barrio, is long. But all of it necessary. Here's what needs to be done.

Hire community outreach workers to distribute multilingual literature about HPD's role in El Barrio and similar neighborhoods in all 5 boroughs. Materials should publicize the 311 hotline where tenants lodge complaints regarding housing code violations.

Grant inspectors the power to write citations against owners which must be paid immediately upon finding violations left unrepaired during a reinspection.

Community outreach workers who carry out the HPD Public Education Initiative in East Harlem will report to the East Harlem HPD Oversight Team so the Team can measure the overall effectiveness of the program.

The East Harlem HPD Oversight Team will review for approval all materials that HPD provides to tenants as part of the HPD Public Education Initiative.

Consolidate all information about HPD on one web location and publicize this webpage in HPD Public Education Initiative materials and advertisements.

Fulfill the responsibility of the Emergency Repair Program, making all emergency repairs not completed by the landlord in the designated amount of time, and bill the landlord.

Hire community outreach workers that provide information about this program in all 5 boroughs.

Inspectors must carry violation notifications in all available languages with them at all times.

Mailed printed violation reports to be in tenant's primary language.

For all emergency conditions, especially when we don't have heat and hot water in the winter, HPD should improve their response: inspectors must be dispatched in less than 24 hours and must notify landlords of the violation immediately and the requirement to make the repair within 24 hours; fine owners when the repair is not made within 24 hours.

Increase the number of inspectors.

Give inspection appointments, with date and time, to everyone who lodges a maintenance complaint, so that residents suffering in poor housing conditions can make arrangements, so that their apartments can be inspected.

For non-emergency complaints, send tenants written notification of inspections with exact time and date at least 24 hours prior to the inspection.

Guarantee HPD call-backs to tenants to find out if violations have been repaired.

Expand the Alternative Enforcement Program annually to include 1,000 of the city's most poorly-maintained residential buildings.

Additional requests:
HPD to provide a written update/report (in three weeks)
HPD to attend a follow-up meeting (in late May)

Going forward, I expect Juan Gonzalez at Daily News to write about this again. I certainly will write more if things don't change for the better or if HPD doesn't make the aforementioned course corrections any time soon. And hopefully when Con Edison does, in fact, give the green light to turn on our gas, our building will be ready and rightly constructed for it. Fingers crossed.