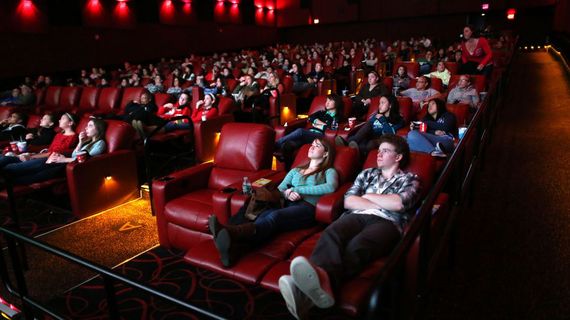 Winter is here and one of best ways to combat the cold is to go inside--to the movies! Hollywood seems to schedule even more of their blockbuster releases around the holidays, case in point--Rogue One: A Star Wars Story took over complete multiplex theaters on its opening weekend! And here in New York, we are privileged to have access to a fairly steady stream of great independent film options from all over the world, but invariably the question arises "where should we go to see this movie?"

New York City is home to an astounding variety of movie theatres, offering everything from traditional neighborhood cinemas to large multiplex chains--including one of the largest IMAX screens in the world! Here are five amazing theaters offering refuge from the chilly winter winds; so while you sit inside far from the cold, you'll have some lovely amenities to enjoy as well. 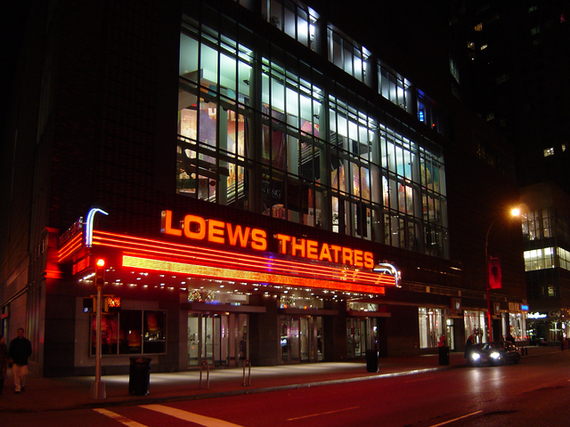 AMC began as a family business 90 years ago, and has grown to become one of the largest movie chains in the U.S., welcoming approximately 200 million guests annually in 300 movie theatres. One of these multiplex theaters is located on the Upper West Side, just a block and a half away from Central Park. This complex is the home of one of the largest IMAX theaters in the country, with a staggering 600 seats. AMC generally shows big commercial productions and blockbusters, and is equipped with incredible audio, video, and 3D that gives justice to any special effects. All AMC movie theaters offer reduced prices to screenings starting before noon, which may be worth noting for the budget traveller. And it's not a bad way to start your day, as there are plenty of comfy brunch restaurants in the area to head to afterwards, where you can discuss the film. The neighborhood has also seen a recent increase in shopping venues, such as outlet store Century21 around the corner. But if you'd like to splurge on your movie experience, AMC also offers the pricier alternative AMC Prime, which combines the high quality picture and sound technology of Dolby Cinema with enormous, numbered reclining seats. But beware -- if you've ever leaned back in one of those for a film screening, it's hard to ever be content with regular seats again!

AMC Loews Lincoln Square 13 is located at 1998 Broadway between 67th and 68th Street on the Upper West Side. 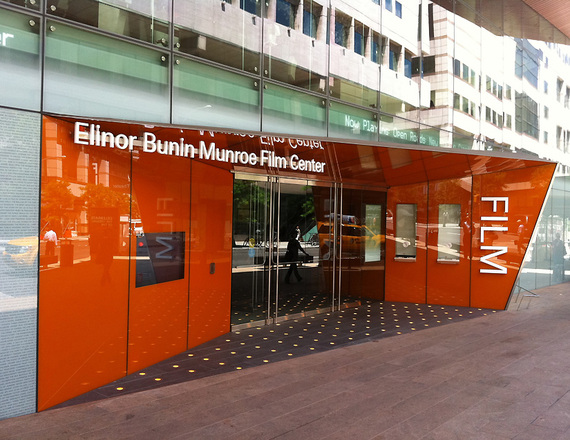 If you are more interested in Indie films, head down a couple of blocks to Lincoln Center's own movie theaters. Their beautiful paneling and airy design definitely makes them among the chicest and most upscale in New York, offering a wide range of films that will attract the true cinephile. What differentiates Lincoln Center's programming from others showing independent film, is the mix of film series like "Open Roads: New Italian Cinema" and "Rendez-Vouz with French Cinema." The main attraction is of course the prestigious New York Film Festival in October, which is well worth a visit in itself. The true lover of culture doesn't even need to travel further than a couple of doors, as the Metropolitan Opera, New York Philharmonic and New York City Ballet is located in the same complex. Central Park is only a couple blocks away, in case you need to stretch your legs after your movie or performance, or if you haven't had enough, stroll down a 20 minute walk on Broadway to catch a musical or a play. And best yet--there's a full-service cafe that operates at the main location--Indie Food and Wine--so you have lots more options for snacking besides popcorn. Click here for the menu.

Film Society of Lincoln Center encompasses the Elinor Bunin Munroe Film Center (a multi-screen complex) at 144 West 65th Street, as well as the Walter Reade Theater across the street at 165 West 65th Street on the Upper West Side. 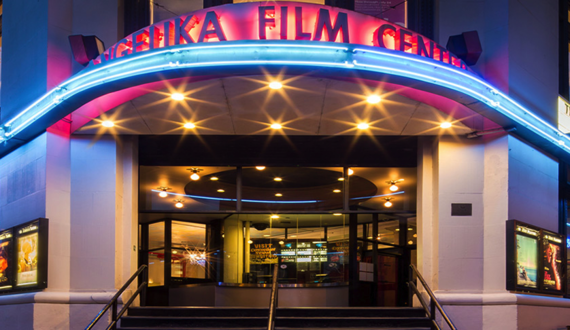 Further downtown where Broadway crosses Houston Street (and a couple of blocks west), you'll find the iconic Angelika Film Center & Cafe. Houston Street is the formal divide of NOHO from SOHO (North of Houston vs. South of Houston), which coincidentally offers two of New York's best and hippest downtown shopping areas. Angelika belongs to a movie chain focusing on independent film, and the New York location opened in 1989.

The corner entrance is located at the Renaissance-inspired Cable Building, which was built in 1892-94 as the headquarters for one of the city's tram companies. It was hailed by contemporaries for its magnificent architecture. The films are shown in the basement, which once served as the power plant for the trams. Sometimes you can hear (and feel) the subway trains during screenings, but if you are not overly sensitive, the prime location and fine selection of films shown, are well worth the visit.

Angelika New York is located at 18 West Houston Street (at the intersection of Mercer Street). 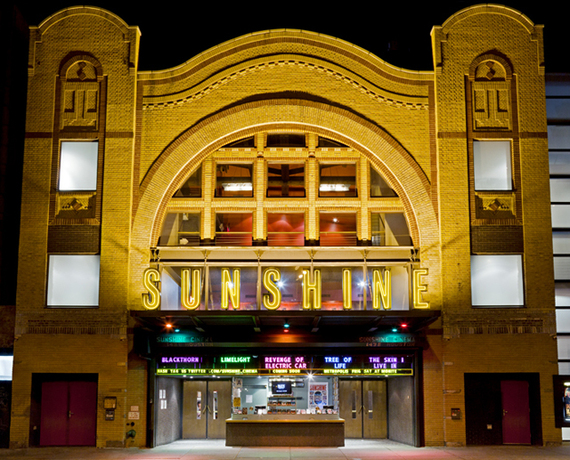 At the corner of Broadway and Houston, if you turn east on Houston Street you'll discover Landmark Sunshine Cinema, located in a beautiful Lower East Side building from 1898. Previously, the location has shown films under the name of the Houston Hippodrome, served as a theater for Yiddish vaudeville, and functioned as a warehouse. In 2001 Sunshine Cinema took over the building and when it opened to the public in December of that year, it was equipped to offer five salons with DLP digital projection and Dolby Digital Surround EX sound.

Landmark Theatres is America's largest movie theatre chain dedicated to feature and promote independent film. In addition to showing a great selection of films, the space also offers a Japanese rock garden and a stunning view of the city from the third floor's spectacular glass window.

Landmark Sunshine Cinema is located at 143 East Houston Street between Forsyth and Eldridge Street on the Lower East Side. And be on the lookout for the opening of its newest location at 625 West 57th Street (at 12th Avenue). 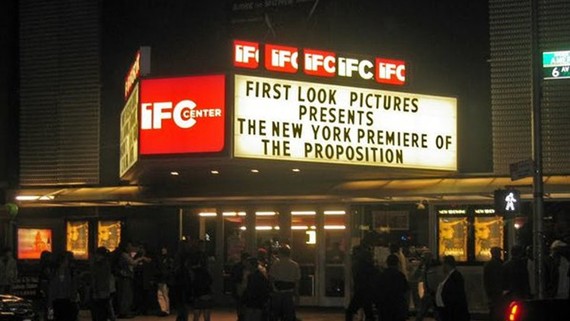 Back on the west side, in the heart of New York's picturesque West Village, you'll find the IFC Center. This is another great choice for the lover of documentaries, world cinema and independent films. IFC is hosting North America's largest documentary film festival DOC NYC in the fall, while showing a great program of independent film all year round, often followed by directors Q&A's. IFC also offers a variety of themes and programs, such as cult movies Fridays and Saturdays at midnight, a monthly program featuring LGBTQ guest curators, special presentations of theatrical productions such as National Theatre Live, Royal Shakespeare Company, Branagh Theatre Live and much more. The venue opened in June 2005, following a renovation of the historic Waverly Theater. Be sure to use the bathrooms downstairs so you may add the experience of walking through a basement dungeon tunnel flooded in green light to your New York bucket list. 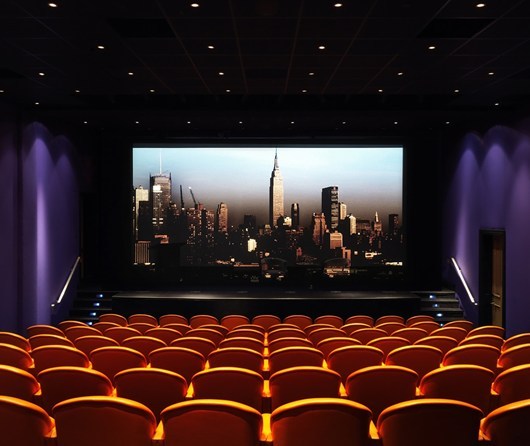 And for one more "bonus" entry on our list (even though there aren't any current listings for upcoming films, you should be aware of this really nice, high-end viewing option for down the road).

SOHO's Crosby Street Hotel has a luxuriously designed screening room in the basement, and on Sunday evenings, the hotel runs a film club, which is open to both hotel guests and the public. The films shown are often critically acclaimed blockbusters, which usually includes many Oscar and Golden Globe-winning and -nominated films. The hotel offers packages with dinner or cocktails at the Crosby Bar, followed by a movie at eight o'clock. But you may need to book well in advance, as the movie theater holds only 99 seats, which sell out quickly. A three-course dinner and a movie package costs $55. A cocktail with bar snacks and film is $35.

This is just a small, select grouping of all the movie theaters New York has to offer. To find a theater closest to you, visit Fandango and type in your ZIP code, select the film, and then the movie theater. We hope our list provides you with a balanced mix of movie theater options, as well as opportunities to enjoy some great New York architecture in the process. Happy Viewing!