On Saturday night I was in Williamsburg attending the monthly comedy show Good For You at Cantina Royal. The Empire State building was ablaze in all the colors of the rainbow and could be seen from the dark restaurant on North 3rd street. Comedian Sam Morril was on the stage discussing the need for gays to have their own branded fare. "No one can be bigoted when they're eating food," he said. "That's why the gays need a cuisine. Then we can all say 'Let's just stay in tonight and have some gay.'"

The audience laughed with the newfound energy that had been pulsing through all of New York since DOMA was repealed by the Supreme Court last week. Most of us
would be walking in the next day's annual Pride Parade with our places of work or with our friends. Morril's joke might not have gone over in another area of the country, but that likely won't be the case for long.

New Yorkers like to partake in the cultures they weren't born into: Italian, Chinese, and gay, to name a few. They also really love parades, which, before yesterday, I didn't really understand. Doesn't living in New York City mean you'll never have to own a vinyl folding chair with a netted cupholder? No, it doesn't, because you'll need that to watch all 2000 parades that pass through your street. You also need to keep a large-brimmed hat on hand that is aerated for when your head begins to sweat from the 90 degree heat that rises from the asphalt in the middle of the summer. The hat should probably be vinyl, too.

The Pride Parade has always served the same purpose as the West Indian or the Puerto Rican parades: to bring the city together to celebrate one of its many, many walks of life. Perhaps you were born Italian or born straight. That's okay, we don't discriminate, come to a parade, any parade. You can walk with us hand in hand and experience what it's like to be Irish for 40 blocks.

I typically avoid the parades as a spectator because I'm not a masochist, but the thought of sweaty throngs of people (many of which may have come in from New Jersey for the day) didn't bother me in the least for Pride. Yesterday was not just another New York parade, it was emotional, magical, and even sad at some points. The past year has seen great strides for gay rights and some people are seeing retribution for their lives and the things that they've been denied. The parade was a celebration and march toward equality, but also a reminder that this vibrant culture can die out just like the rest of them.

Will there ever be a gay Little Italy? A gay K-town (gay-town?)? Will we all be paying way too much money to ride the Coney Island "Homo's Revenge" roller coaster -- a five-loop attraction that is decorated in a way that looks like Mardi Gras ate a rainbow and threw it up? The things that make New York special are the same things that their inhabitants desperately try to preserve, but often that effort manifests itself in a bad restaurant in Times Square. Gay culture is plenty touristy already in the shopping mall known as NYC, but I feel the need, just like any other group that had to fight for acceptance in this town, to keep it this strong forever. Is it all going to change?

I'd always heard from my cousins that in Sweden, no one gets married. None of them can really explain why this is so, those reasons were discussed and discarded long before their time. One cousin told me there was just no benefit, federal or otherwise, to getting married, so it's not an idea that pops into anyone's head. "That's some psychology," he says. "It's not a natural idea." 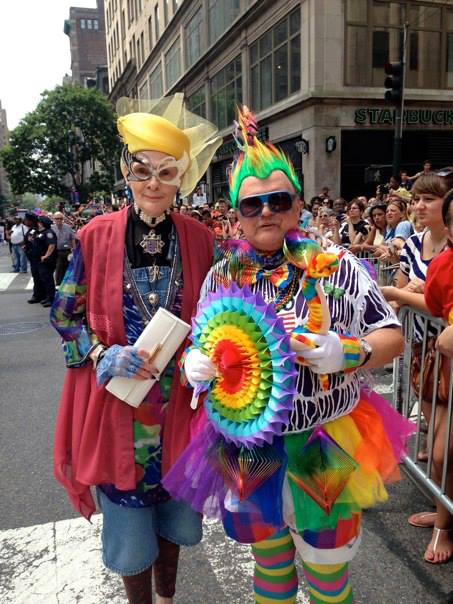 Factoids like this run rampant in the debate of gay marriage. At yesterday's Pride Parade, I came to realize that mentioning something like Sweden's lack of naturally occurring marriage is silly because, lo and behold, we are not Sweden (though so many of yesterday's costumes were inspired by ABBA). We are in fact, America, and our society and federal system is set up to reward married people, and the question of if that way of life is good or bad is not really what's in question here. The fight for gay rights was for many years a futile argument to achieve something within a governed body that the government had decided was the way life had to be lived. For gays to be able to get what society had deemed the life worth living was kind of like demanding a roof for the house someone forced you to occupy. 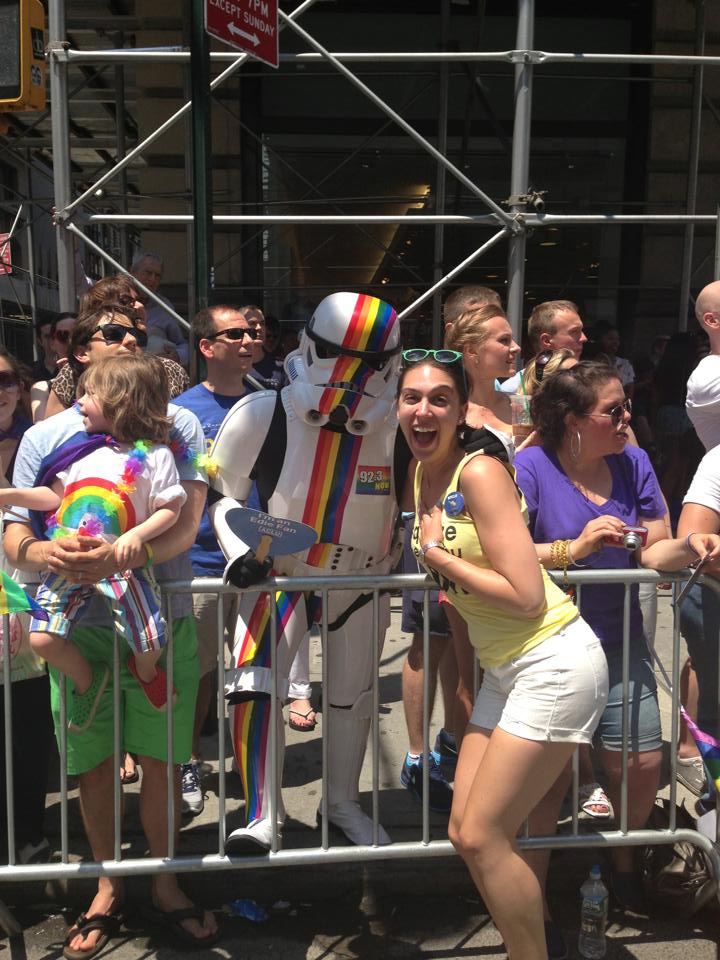 The author excited to be able to legally marry this storm trooper.

I thought about all of this as I rode a Citibike to the parade and, like the oblivious Citibike-rider we all are, I did not realize that all of the bike racks along Fifth Avenue would be out of service. So, I rode my Citibike down the parade route for two hours, loaning it to a man wearing a rainbow flag as a cape so he could ride past the crowds as they cheered for equality, expressionism, and our city's wonderful services. Everyone was sweaty and happy, crying (though dehydrated), and not once caring about the long waits, throngs of people, and annoying presence of a bike in a crowded space. Glitter was everywhere, but it didn't really need to be. 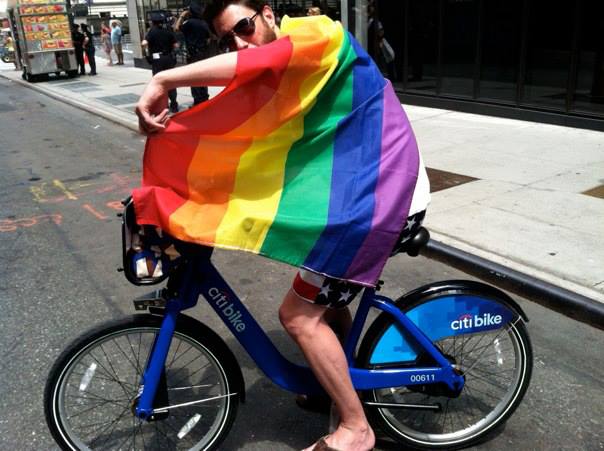 Cultures change. There may be Jersey Shore, but there's still black truffle pizza on Carmine Street. There may be a neon club in an old synagogue on the Lower East Side that charges $30k to host your bat mitzvah, but there's still Katz's Deli. The right to marry won't change gay culture, but it was an important and necessary milestone to make way for the next and even more fabulous version of it, just like any other minority has endured. Perhaps the parades of NYC are supposed to be like graduation: a reminder of where you came from and the acceptance that the future is unknown, but bright.

Marriage won't change the Boiler Room or get rid of the Gay Men's Chorus. But maybe one day, we'll all be able to go out for some gay. 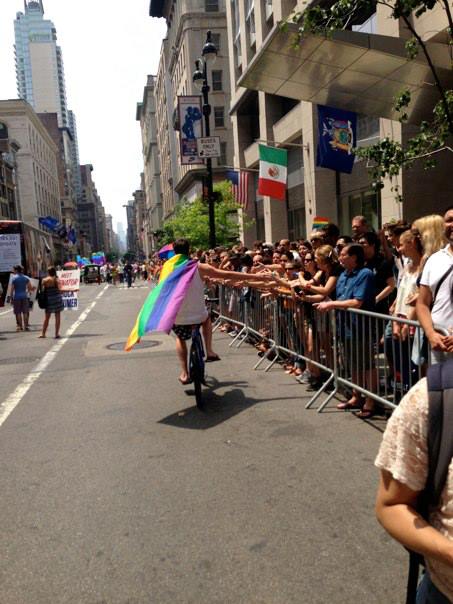