Just like food trucks have become a staple of many New Yorker's diets, a twice-daily visit to a local phone truck has become a ritual for most New York City public high schoolers. Unfortunately, these trucks aren't serving up tacos or banh mi sandwiches. They're for-hire phone lockers that charge students $1 a day to store their phones outside the school walls. 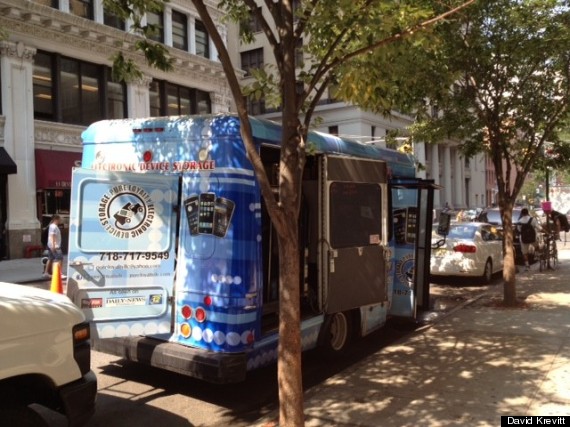 This is because the NYC Department of Education under Mayor Bloomberg prohibited cell phones in schools, citing distraction and potential cheating as reasons for the ban. This forces students to spend $180 a year to store their phones, roughly the cost of an SAT prep course or a dozen new books.

The cheating argument feels flimsy: for as long as tests have existed, students have found a way to cheat on them. Sorry, math teachers everywhere. Though the ban may not have stopped cheaters in their tracks, it's certainly had a negative impact on the relationship between students and their school.

One student I spoke to seemed frustrated with how much money the school's allowing phone-truck operators to make at their expense, estimating that "this one truck is making more than a thousand dollars a day."

Her friend acknowledged the ban's rationale, but said many worried about leaving school to find that their phones had disappeared. "Phones are a distraction for every high school, but I know sometimes kids probably think what if the phone truck just drives away."

Rather than making schools distraction-free, the cell phone ban merely adds a layer of distraction to a student's life: paying for storage, spending time in line before and after school, and a case of severe nomophobia throughout the day.

When the Bloomberg administration enacted the phone ban, they must not have foreseen the unintended consequences that eventually trickled down to students. To their credit, the current mayoral candidates vow to lift the ban if elected, some of them on day one in office.

But what if completely repealing the ban isn't the right decision either? Allowing phone use in schools with no strings attached may not promote cheating, but it will certainly be a distraction in the classroom.

Cell phone prohibition, on the other hand, makes an already tense relationship between school and student more adversarial. What I propose is a third way for dealing with smartphones in schools: using them as tools to interact positively with students, encouraging beneficial behaviors like paying attention in class.

Programs involving students, cell phones and incentives have a mixed history of success, with many of the failures coincidentally occurring in New York City public schools. A 2007 campaign, spearheaded by then-Chancellor Joel I. Klein, offered to provide students with cell phones in order to text them academic encouragement outside of school. From what I gather, that program never got very far off the ground before being shut down.

Likewise, a study that paid NYC students $1.5 million to boost standardized test scores over two school years proved to be ineffective. The problem, examined further by the program's creator, Ronald G. Fry, was that students can be incentivized for educational inputs like reading books, but not outputs like test scores. He proved that, when presented with a clear step to take (read this book) rather than a goal (do better on this test!), students respond well to financial incentives.

Much like reading books, paying attention in class is a critical piece of academic success and an area ripe for student incentives. Why not reward students for their attention, with the smartphone as a measurement tool? I'm sure students would welcome saving $20 in phone-truck fees and hours in line every month. Teachers may even see boosts in grades from students no longer worried about their phone being surreptitiously driven away during third period chemistry. How about it, future mayors of NYC?

More:
communicationhealthy livingtechnologyUnplug And Rechargesmartphones
Newsletter Sign Up
The essential guide to taking care of your mind and body
Subscribe to HuffPost’s wellness email
Successfully Subscribed!
Wellness delivered to your inbox

Head of Growth at Coach, formerly Co-Founder at BRB